After invading and banishing Crimean Tatar leader Refat Chubarov from his native Crimea, Russia has now initiated criminal proceedings against him.  He is accused of encroaching upon Russia’s territorial integrity by denying that what Russia illegally grabbed is its territory.  As Chubarov notes, the charges should also be laid against most of the world’s leaders with German Chancellor Angela Merkel at particular risk.  At a recent meeting with Russian President Vladimir Putin, she reminded him that Crimea remains part of independent Ukraine. 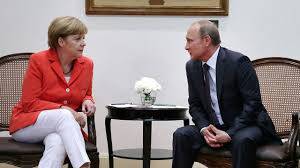 Crimean prosecutor Natalya Poklonskaya announced on May 29 that Russia’s FSB [Security Service] has initiated criminal proceedings against Chubarov under Article 280.1 of the Russian Criminal Code (public calls to action aimed at violating the territorial integrity of the Russian Federation).

Poklonskaya, appointed by the leaders installed after Russian soldiers seized control, has often demonstrated a glaring lack of understanding of basic principles of law.   The criminal proceedings, under which Akhtem Chiygoz, Deputy Head of the Mejlis, or Crimean Tatar representative assembly, and six other Crimean Tatars are currently in detention, are just one example of legal nihilism, with the charges pertaining to alleged offences before annexation, and therefore under Ukrainian rule and legislation.

With Chubarov in forced exile in Kyiv, where he recently became a member of Ukraine’s parliament, this new criminal ‘investigation’ seems reasonably theoretical and simply grotesque.  As if criminals, having stolen a person’s home and possessions, then try to get criminal or even civil proceedings brought against the owner for demanding his home back.

Poklonskaya claims that the ‘investigators’ will take procedural decisions with respect to citizen Chubarov”.

Her use of the term ‘citizen’ is curious and probably deliberately misleading. Refat Chubarov is a citizen of Ukraine, and what happens in Crimea directly affects him because Crimea remains Ukrainian in accordance with both Ukrainian and international law.

Poklonskaya then goes on to say that Chubarov has been declared on the wanted list. “We are waiting for him”, she added.

This is especially odd given that Russia whom she has chosen to given allegiance to last year banned Refat Chubarov from entering either Crimea, his home, or Russia for five years.

The charge which the occupation regime is now accusing Chubarov of also carries a sentence of five years.  Poklonskaya preferred not to elaborate on where “citizen Chubarov” would be imprisoned now that Russia has resumed Soviet ways and begun exiling those dissident voices it cannot easily imprison (or worse).

While appearing comical, this new move undoubtedly has a sinister side.  Eskender Bariev, head of the Crimean Tatar Rights Committee sees the move as yet another step towards banning the Mejlis, and describes it as a method of intimidation and pressure on Crimean Tatar activists.  The offensive against the Mejlis began back in May 2014, before Chubarov was banned, and intensified from September last year. As mentioned, the main target of the so-called February 26, 2014 case is the Deputy Head of the Mejlis, held in detention since Jan 29, 2015.

Ruslan Balbek, deputy prime minister of the de factor government in Crimea has already claimed that Chubarov “while wanted for committing a crime does not have the right to be called the head of the Mejlis of the Crimean Tatars, and even less to represent the Crimean Tatar people on the international political scene ».  He also claimed that Chubarov is an agent of US influence working against Crimea.

Balbek, like all the others now in charge in Crimea, seems unaware of the presumption of the innocence, and of the fact that virtually all world leaders have reiterated Chubarov’s call for Russia to stop occupying Crimea.

It is often a specific type of person who is willing to collaborate with an occupation regime and undertake dubious ‘criminal investigations’.  Most of the recent cases initiated by the FSB and / or Investigative Committee, especially with respect to Crimea and Ukrainians suggest that Moscow has decided to go for clowns.