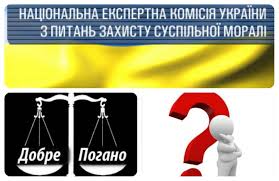 The Cabinet of Ministers has at long last issued a decision envisaging the dissolution within 5 months of Ukraine’s anachronistic commission on ‘protecting public morality’.  It is a welcome move but one that should have gone further since the dangerously vague law which the Commission was created to police remains intact.

The law enabling the Commission’s dissolution ( №1647 ) was signed into force by President Petro Poroshenko back on March 3, and media organizations had already issued an appeal trying to hurry the Cabinet of Ministers up.  Vasyl Kostytsky was removed from his post as head of the Commission back on March 30, however a number of staff remain.

The new law amends the 2003 Law on the Protection of Public Morality.  It removes all provisions regarding the Morality Commission and states that control over enforcement of legislation on public morality should be exercised “within the framework of their competence” by the Interior Ministry; central authorities carrying out state policy in the sphere of culture, cinematography; tax policy and customs issues in combating offences when implementing tax and customs legislation; the State TV and Radio Committee and National Broadcasting Council.

The bill’s author - Olha Chervakova - was a journalist before being elected to parliament in Oct 2014 and is deputy chairperson of the parliamentary committee on freedom of speech.  It was supported by, among others, the Journalist Ethics Commission, journalist unions, the Institute for Mass Information; the Media Law Institute, Telekritika, who pointed to the unwarranted burden on the taxpayer of a Commission which had consistently sought to restrict freedom of speech.

In their appeal, reported here, the authors argued that the new law would bring Ukraine’s legislation into line with the Constitution and recommendations from the Council of Europe.

While the dissolution of the Morality Commission is doubtless long overdue, more is almost certainly required for full compliance.

The Law itself, as mentioned, is full of terms that are woolly, unclear and dangerously open to subjective interpretation of what exactly ‘harms public morality’.  This made application of the law unforeseeable.  The use of this vagueness as a weapon against dissident views was clearly recognized by the regime of ex-President Viktor Yanukovych with a draft bill proposed in 2011 adding another ominously woolly term: “products demonstrating various forms of anti-social and criminal activities”.

In fact, however, the Yanukovych regime introduced the most repressive measures against freedom of speech through other means, rather than the law on morality.  The latter was convenient as a means of blurring the real issues and dividing the opposition.  The Ukrainian Council of Churches and Religious Organizations, for example, has consistently opposed dissolution of the Commission and rather supported increase of its powers.

Although there was undoubted politicization of ‘morality issues’, attempts to extend the role of the Commission were undertaken under the presidency of Viktor Yushchenko as well. Just prior to Yanukovych’s victory in the 2010 presidential elections, the Commission proposed a bill which would have significantly extended its powers and the scope of the law.

All of these attempts failed, and will now hopefully become history with the demise of the Commission.

The law which has thus far not been touched was severed criticized in Jan 2004 by Professor Dirk Voorhoof  at the request of the Council of Europe.  He stated then that “Ukraine’s Law on the Protection of Public Morals … is a disproportionate interference by public authorities in freedom of expression, as guaranteed by Article 10 of the European Convention of Human Rights”.

His recommendations were unfortunately never taken into account. He did mention then that: “Leaving the interpretation of the above provisions to the evaluation of the National Committee of Ukraine of the Protection of Public Morals does not offer the minimum degree of protection against arbitrariness required by the rule of law in a democratic society”

The vague and unforeseeable terms remain, and leaving their interpretation to, for example, the police seems no less dangerous.