Final act in Russian reprisal against Sentsov and Kolchenko imminent 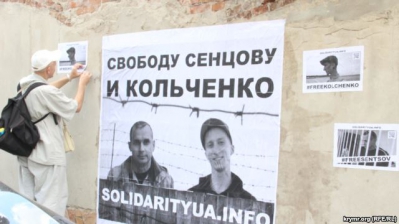 Protest outside Russian embassy on June 1, 2015.

The Russian trial of renowned film director Oleg Sentsov and civic activist Oleksandr Kolchenko, whose arrests are widely viewed as politically motivated, could begin within weeks.  Both are facing sentences of 17-20 years effectively for refusing to ‘confess’ to non-existent acts of terrorism.  The charges against Kolchenko pertain to one action which he admits, but which, even in Russian law, constitutes no more than an act of hooliganism.  There is nothing against Sentsov at all, except the testimony of two other people who received minimum sentences for their willingness to ‘confess’ and ‘cooperate’ with the prosecution.

The men and their lawyers have finally been able to read the case material, and this has now been handed to the prosecutor for the final indictment to be confirmed.  Kolchenko’s lawyer Svetlana Sidorchenko quotes the investigator as saying that the trial could begin in the middle of June but will be before a military court in Rostov on the Don, far from Moscow.  Nothing about this case gives any grounds for believing that the men will face a fair trial, so it is imperative that the maximum number of journalists and representatives of western countries are present at the hearings.

Sentsov and Kolchenko were arrested in May 2014, together with two other active opponents of Russia’s annexation of Crimea – Gennady Afanasyev and Oleksy Chirniy.  All four men were held for two to three weeks without access to proper lawyers or their families and then taken by force to Moscow.  Sentsov and Kolchenko have alleged from the outset that they were subjected to torture while held incommunicado in Simferopol.  Sentsov was told that if he didn’t ‘confess’ and provide the testimony demanded, including against Euromaidan and the government in Kyiv, he would face even harsher sentences.  He refused and stands accused of having masterminded a so-called ‘terrorist plot’.  Sentsov’s lawyer, Dmitry Dindze is convinced that the delay in allowing him to see his client was to ensure that the marks from the torture had faded.

Before examining the actual charges against all four men, it is worth recalling the first public statement made by the FSB [Russian Security Service] about the arrests.  On May 30 it claimed that the four men were members of an ultra-nationalist Right Sector ‘diversionary terrorist group’ whose main aim was to carry out ‘diversionary-terrorist’ acts in Simferopol; Yalta and Sevastopol, and in the last of these to destroy a number of buildings, railway bridges and power lines.

Such actions, were they to be proved, would undoubtedly constitute terrorism, unlike the specific charges that were also mentioned.  The FSB asserted that the men had planned to detonate home-made explosive devices during the night before Victory Day near the Eternal Flame and near a monument to Lenin.   They were also accused of arson attacks on a pro-Russian organization’s building on April 14 and the United Russia offices on April 18.

In the trials already held, and in the indictments against Sentsov and Kolchenko, the attacks on infrastructure appear to have been quietly shelved, with only the acts that  do not contain real elements of terrorism remaining.

Sentsov is accused of having created a ‘terrorist group’ no later than April 2014, on the instruction of Right Sector, with which he was not known to have any connection.  This group supposedly aimed to “impact upon the adoption of decisions by the Russian Federation authorities regarding the withdrawal of Crimea from its makeup”.

The group is supposed to have been made up of Afanasyev, Chirniy and Kolchenko, as well as four other people now on the wanted list, and – on Sentsov’s instructions – to have carried out the above-mentioned arson attacks.

Yegor Skovoroda, shortly after Chirniy was sentenced to 7 years, gave some details about the actual events in April 2014, less than a month after Russia annexed Crimea.

During the night from April 13-14, Molotov cocktails were thrown in the entrance of the offices of the Russian Society of Crimea, an organization which played an active role in events leading up to annexation.  Sergei Aksyonov, the leader installed after Russian soldiers seized parliament, is one of the Russian Society’s heads.

Only the cast-iron railing at the entrance was damaged in this attack carried out at night when the building was known to be deserted.

Four nights later, during the early hours of Aril 18, a Molotov cocktail was thrown through the window of the local branch of the United Russia party.   This caused damage to the window and some appliances in the kitchen.

Chirniy, 33-year-old historian working as assistant to a lecturer from the Crimean Institute of Culture, Art and Tourism,  was, according to the FSB version, arrested first. Like all the others he was active in protests against Russia’s invasion and annexation.

He was probably arrested in the early hours of May 9, with a canister of something he is supposed to have believed was an explosive substance.  This apparently was in fact a shell, prepared under the supervision of FSB officers, however Chirniy is said to have only discovered this later.  The FSB claim that he and an accomplice  - 24-year-old Gennady Afanasyev who was detained on May 9 – were planning to blow up the Vladimir Lenin monument outside the railway station and the Eternal Flame in Gagarin Park in the centre of Simferopol.

Skovoroda recounts conversations with two activists who did not want to give their full name.  One of them says he witnessed Afanasyev’s arrest, the other that following this arrest, they phoned “Sentsov and others” to warn them about the crackdown.   Sentsov recounted how, around an hour or so after his arrest, Afanasyev had phoned him and asked for a meeting.  Sentsov, already knowing that Afanasyev was under arrest, refused.

Those were months when pro-Ukrainian activists were in real danger from paramilitary vigilantes helping the Russian soldiers.  Virtually all those who helped Ukrainian soldiers under siege, or in other ways expressed their protest knew one another.  It is probably significant that Chirniy, the first person to be arrested, was the only one of the four men arrested whom other Crimean activists knew nothing about.

Oleg Sentsov was arrested in his flat, with his young daughter present, during the evening of May 10.  He says he was beaten, tortured and threatened with rape or murder, for almost 24 hours, and that the FSB have claimed that he was only arrested on May 11 to cover this up.  He was only able to see his lawyer much later, after being taken, by plane in handcuffs to Moscow where he has been held in the Lefortovo Prison ever since.

Even though the bruises had faded by the time he was allowed to see his lawyer, the marks were recorded by staff of both the temporary holding centre in Simferopol and the SIZO [remand prison].  Despite this, and similar allegations from Kolchenko, Russia’s Investigative Committee refused to initiate criminal proceedings over Sentsov’s torture. Dindze says that the investigators have claimed that Sentsov was into sadomasochistic relationships and that a partner had inflicted the injuries on him.  The lawyer points out that nothing was found during the search of Sentsov’s home to indicate such leanings.

The last person to be arrested, on May 16, was Oleksandr Kolchenko [known as Tundra], a committed anarchist and antifascist.  While there was no evidence that any of the men were involved in Right Sector, the accusations against Kolchenko were particularly absurd given his diametrically opposed political views.

As mentioned, Kolchenko admits involvement in the latter, however both he and his lawyer are adamant that the offence can in no way be called a terrorist act.

Sentsov’s alleged role is only to have given instructions, with all testimony coming from two men held under total police control and without access to lawyers until after being brought to Moscow.  As threatened, he faces the most serious collection of charges, including the creation of a terrorist group, with the minimum sentence being 15 years (and a life sentence possible).

Another cynical element in this case has been the attempts to force Russian citizenship on the men to try to justify their effective abduction to Russia and the refusal to allow them their rights under Ukrainian and international law  (see: Imprisoned Crimean Activist takes Russia to Strasbourg over forced citizenship  )

It seems likely that the FSB focused only on the men’s opposition to annexation and, in Sentsov’s case, on his involvement in Euromaidan and may not even have realized that they were arresting a world-renowned film director whose politically motivated imprisonment is now the subject of protest from major film directors and film bodies, and mentioned at all European arts and film events.  There are also regular demands for his release from the Parliamentary Assembly of the Council of Europe, the European Parliament and many others.

Had the FSB done their homework, and also freed themselves from the fixed idea that any confessions can be extracted if the means are brutal enough, they might not have walked into this shameful mess.  Russia can arrest and hold Crimean Ukrainians prisoner, with its obedient judges passing the sentences required.  It has, however, proven unable to break Sentsov and Kolchenko.  Their dignity and unwillingness to be cowered must shame all those implicated in this judicial reprisal.