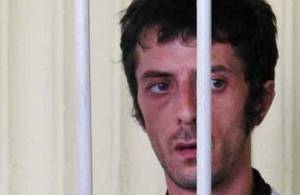 A jury in Krasnodar has unanimously acquitted Khaiser Dzhemiliev of murder and found the son of veteran Crimean Tatar leader Mustafa Dzhemiliev guilty only of illegal possession of a weapon and of manslaughter..  As his lawyer, Nikolai Polozov notes, the jury’s verdict is virtually identical to that of the Ukrainian court which Russia’s prosecutor and court had chosen to ignore.

The jury announced its verdict on June 2.  It dated Khaiser’s detention as being from the date he was arrested – May 27, 2013, meaning that he has already served two years.  It also found him worthy of leniency over the charge of possessing firearms.

Polozov writes that there will be discussion of the verdict on Thursday, after which the court will retire to pass sentence.   The maximum sentence envisaged by the Russian Criminal Code (Article 109) for causing death through carelessness is a 2 year term of imprisonment which Khaiser Dzhemiliev has already served.

As reported, on April 10 this year a court in Kyiv found the 33-year old Ukrainian national guilty of manslaughter; theft of a weapon and ammunition and illegal possession of both.  He was sentenced to 3 years and 8 months imprisonment, with this counted from May 27, 2013.  The sentence was not appealed and has now come into force.

A Russian court on May 27 this year refused to terminate the trial despite the verdict and sentence passed by a Ukrainian court and Ukraine’s formal request for his extradition.  Although Russia’s own Criminal Code makes it quite clear that a sentence passed in Ukraine is sufficient grounds for terminating proceedings on the same charges in Russia, the judge explained his refusal as being because there  had been no verdict from a Russian court.

There has now been such a verdict, and a cheeringly just one.  It is no accident that Polozov calls juries in Russia “the only normally functioning judicial body in Russia”, and adds that this is why there are efforts to reduce them.

The jury’s verdict and Ukrainian court verdict and sentence are fully in accord with previous rulings from Ukrainian courts from early 2014 which reinstated the original charges of manslaughter and ordered Khaiser’s release from custody.  The order to release Khaiser was then reiterated by the European Court of Human Rights which on July 10, 2014 applied Rule 39, ordering that Dzhemiliev be freed. Despite the binding nature of all rulings and decisions from the Court in Strasbourg, Russia not only failed to comply, but also moved Khaiser from Simferopol in Crimea to Russia’s Krasnodar.  The prosecutor rejected the charges laid back at the time of the tragic shooting in May 2013 of manslaughter through carelessness and accused Khaiser of ‘murder out of hooligan motives”’.

Every step of the court proceedings up till Tuesday had only confirmed the conclusion reached by veteran Crimean Tatar leader Mustafa Dzhemiliev that the Kremlin was resorting to open blackmail by holding his son in prison and making the charges against him more serious.  The aim was seen by many as being to put pressure on Mustafa Dzhemiliev to modify his strong position against Russian occupation of his homeland. The 71-year-old former Soviet dissident was 6 months old when the entire Crimean Tatar people were deported in May 1944 and has now been banned from Crimea and Russia with this preventing him from even seeing his son.  Mustafa Dzhemiliev has been and remains implacably opposed to Russia’s invasion and annexation of Crimea.

In May 2013 Khaiser Dzhemiliev shot and killed Fevzi Edemov who was working as a guard to the family.  All the evidence pointed to manslaughter, yet Russia claimed ‘murder out of hooligan motives’  Up till now everything had pointed to yet another managed travesty of justice with Khaiser Dzhemiliev joining a large number of other Ukrainian hostages held in Russia.

Russian jurors have proven that justice is still possible in Russia.