Another Crimean Tatar detained or abducted 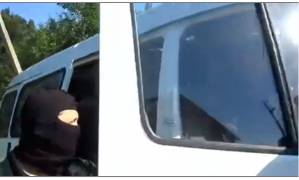 Early in the morning of June 4 a number of armed men in masks arrived in the village of Straganovka near Simferopol and took 36-year-old Crimean Tatar Riza Izetov away in a van.  They refused to identify themselves, but claimed that he was being taken away on the basis of a court order.  He was later released, and is understood to be a witness in some criminal case or other, although again there is no indication as to which.

Later in the morning 12 men who had come to the FSB building in Simferopol to show their support for Izetov were detained.  They were taken away, supposedly to establish their identity although all of them are reported by the Crimean Field Mission on Human Rights to have had ID on them.  A lawyer was later allowed in to see the men.

The above title is chosen quite deliberately.  There was nothing in the masked men’s behaviour on Thursday morning to explain why they were taking away a citizen.  Instead of identifying themselves, the men tried to stop Izetov’s neighbours from filming them.

Since Russia’s annexation of Crimea a number of young Crimean Tatars have disappeared, with two of them abducted and taken away in a van.  They have not been seen since.  There have been repeated armed searches of homes, mosques and religious schools; arrests and the unwarranted detention is ongoing of at least six Crimean Tatars, including Deputy Head of the Mejlis [representative assembly] Akhtem Chiygoz.

The ‘mask show’ on Thursday morning was doubtless part of the procedure under Russian occupation, in which lawlessness and total uncertainty as to why a person is being taken away is part of the deliberate policy of intimidation.