Yanukovych and Azarov top the Enemies of the Press listNGOs express concern over freedom of speech in UkrainePolice who refused to help journalists under attack get warnings and reprimandsStop Censorship vows to make the authorities investigate attack on journalistsWhose circus, Mr Prime Minister?Interior Minister blames opposition for attack on journalistsMore condemnation of police inaction as journalists attackedJournalists protest over „antifascist” assaults and police inactionDangerous “antifascist” cardThugs assault journalists while police look onOn the danger and cynicism behind the “anti-fascist” events planned for 18 MayUses and abuses of far-right electoral gains in UkraineDangerous AllianceDividing TacticA High price for disillusionmentFor those who couldn’t returnThe Limited Force of Fine WordsTerrible DeceitTrial by HeadlineOthers
• Topics / Freedom of expression

Ukraine’s Old and New Enemies of the Press 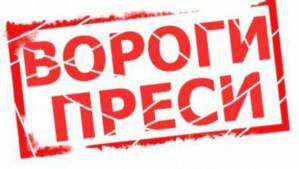 There are old names in the newly published list of this year’s Enemies of the Press, as well as poignantly appropriate new categories to cover the grave threats to press freedom in Russian-occupied Crimea and in the so-called ‘Donetsk and Luhansk people’s republics’.

Fortunately neither current President nor Prime Minister get a mention in the list this year, unlike three law enforcement heads (too already former) who are slammed for their failure to properly investigate attacks on journalists particularly during the Euromaidan protests.

The anti-awards were first initiated in 2007 by the Institute for Mass Information and Ukraine’s Independent Media Union.  Candidates for the title of officials who most obstructed freedom of speech and journalists in their work are put forward by media workers, with the ignominious winners announced on the eve of Journalist Day on June 6.  In 2013 the top enemies of the press were deemed to be the then Prime Minister Mykola Azarov, and President Viktor Yanukovych, both of whom have been in hiding in Russia since February 2014.

This year top (or bottom) place was shared by former Prosecutor General Vitaly Yarema and the ex-Governor of Dnipropetrovsk Ihor Kolomoisky.  Yarema’s claim to notoriety was due to the failure during his term in office to investigate the beatings and shooting from shock pistols of journalists by members of special forces during Euromaidan.  Kolomoisky joined him because of censorship in his media holding 1 + 1 Media and his verbal attack on a Radio Svoboda journalist Serhiy Andrushko in March 2015 over the conflict in the company Ukrtransnafta.  Andrushko had asked what Kolomoisky and his armed men were doing at the company’s office at midnight during conflict that began after the government sought to re-establish control over the state-owned energy company from one of Kolomoisky’s associates.

In second place is oligarch Dmytro Firtash “for censorship and commissioned material in the media owned by his Inter Media Holding.  Inter was consistently named as one of the worst two national TV channels for distortion, muffling of information and other infringements under Yanukovych.  Although it did clean up its act from the days when its journalists were directly accused in a live broadcast of having blood on their hands, its coverage has come under serious criticism over the last six months.

Another oligarch– Renat Akhmetov – is also one of the 10 Enemies of the Press, also for censorship and commissioned news in media belonging to his Media Group Ukraine (including the national TV channel Ukraina and the newspaper Segodnya).

The third place was given to the former Acting Prosecutor General Oleh Makhnitsky “for systematic inaction in investigating the beatings of journalists, including during clashes with enforcement officers during Euromaidan.”

Interior Minister Arsen Avakov was also included in the 10 worst enemies of the press for the same failure to act in investigating violence against journalists, including during Euromaidan.

Two others on the list have come in for mention here.  Serhiy Chebotar was forced to resign as deputy Interior Minister on May 14 after investigative journalists from the TV ZIK programme ‘Nashi hroshi’ [‘Our Money]] were set upon by the security guards when they tried to photograph a large house which, despite Chebotar’s denials, did prove to be owned by the Deputy Minister’s wife.

Ihor Miroshnychenko, a former MP from the far-right VO Svoboda party is included for the attack on the Director General of the National TV company, Oleksandr Panteleimonov in March 2014.

Two special categories of anti-awards have been created this year.

The self-proclaimed ‘Donetsk and Luhansk people’s republics’ and Russian fighters in the east of Ukraine are added because the areas under their control remain the most dangerous zone for journalists.  21 attacks on journalists have been recorded; 35 cases where media offices were devastated by the militants after their journalists refused to work with them.  At least 64 journalists have been abducted.  Maria Varfolomeyeva, who had remained in Luhansk to look after her grandmother, is still being held hostage after being taken prisoner by the militants in January this year (more details here).

The occupation regime in Crimea.  During the period in question, IMI and the Independent Media Union recorded 32 cases of censorship; 13 abductions or illegal detentions of journalists, as well as 11 attacks on editorial office.  As reported here, there has been a concentrated attack on Crimean Tatar and independent media since Russia invaded and annexed Crimea.  More details here:  Russian-occupied Crimea joins 10 world’s worst for press freedom  and Crimean Tatar TV silenced, searches and arrests continue.