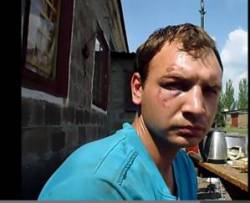 A young Ukrainian soldier taken captive by Kremlin-backed militants during the attack on Marinka asserted at a militant-organized press conference that the Ukrainian military were behind the attack and that in it they lost 200 men.  The problem was not only that this diverged radically from reports issued by the OSCE monitors, but it was also quite different from what the young man was recorded as having said immediately after being taken prisoner.

One of the Russian spetsnaz officers captured in Ukraine stated recently that you can get any confession out of a person through torture, but that he was not giving any information that would need to be wrenched out of him.

That was not so in the case of Roman Mashchenko from the 28th infantry brigade who was taken prisoner by militants from the so-called ‘Donetsk people’s republic’ on June 3-4.

Those who initiated an attack on Marinka or heavy fighting in the area would be in  direct breach of the Minsk Accords just days before a G7 summit expected to discuss the sanctions against Russia over its role in eastern Ukraine.  They therefore had a direct interest in public ‘admission’ of the other side’s responsibility and supposed losses.

Enough to torture for.

Two ‘interviews’ were taken of the captured soldier, though it was almost certainly a bleep that both ended up posted on the Internet.  The propaganda video, in the presence of Russian media, showed Roman Mashchenko with a wooden face stating that the Ukrainian side had lost 200 soldiers in the fighting and that the Ukrainian military had brought his 28th infantry brigade and five battalions, including Chechen and Georgian mercenaries to the town.

This bore no relation to the answers given by the same young soldier, his face very clearly showing the signs of beating, shortly after being taken prisoner.  It is unclear why the pro-Russian British journalist Graham Phillips posted this first video which totally contradicts the propaganda version.  In it Mashchenko explains that he was taken prisoner on his way to a shop to buy bread, and that he and the other men had no orders to advance, and were told only to observe what the enemy was up to and to not succumb to provocation.

For those willing to believe that the young soldier had first lied, and only later decided to tell the truth, it is worth noting that Mashchenko’s press conference ‘confession’ also runs counter to the findings in the OSCE spot report on June 3.  This states that the monitors [SMM] “observed the movement of a large amount of heavy weapons in “Donetsk People’s Republic” (“DPR”)-controlled areas – generally in a westerly direction towards the contact line – close to Marinka, preceding and during the fighting.  The report goes on to provide a formidable list of tracked armoured vehicles, infantry fighting vehicles and military trucks observed heading from areas under militant control towards where the fighting took place.

Ukraine’s forces are mentioned only towards the end with a letter being received from the Defence Ministry warning that heavy weapons would be deployed to deal with the “real threat” posed by the fighting.

That letter coincided with notification from the Russian Armed Forces representative that a ceasefire would take effect at 17.00.  The report does not specify whether the ceasefire did indeed come into force just then but certainly the fighting did cease.

Roman Mashchenko’s statement was in full accord with the version given by Russian pro-Kremlin media, and wildly at odds with the OSCE observers’ report.  It was made after three days of captivity by a man who even during the first interview looked as though he had been subjected to physical pressure and who was totally under militant control.

Spokesperson on the military conflict in Donbas Andriy Lysenko stated on Saturday that Mashchenko had clearly been tortured to extract statements for Russian propaganda that could be seen as justifying the resounding defeat of the Kremlin-backed militants.

It was announced on Sunday, June 7, that Mashchenko had been exchanged for the bodies of militants killed in the fighting around Marinka.  Following Lysenko’s earlier statement, it is to be hoped that any testimony which Mashchenko gives will be as the victim of torture and / or other totally illegal forms of treatment of POWs.

This is by no means the first time that Kremlin-backed militants or Russian officials have tried to beat out confessions from hostages.  Lviv student Yury Yatsenko was finally released after exactly a year in Russian custody, with the FSB [Russian security service] having tried torture, threats and other forms of pressure to force the young man to provide ‘testimony’ against the government in Kyiv.

Viktor Maistrenko, a Russian blogger and journalist earlier told Telekritika about one of many occasions during the prolonged period in which Ukrainian journalist Serhiy Lefter was held hostage when the journalist was subjected to torture.  Maistrenko explains that a film crew was coming from Rossiya 24 so they put the hostages in a chair, covered their eyes with scotch tape and beat them to force them to say when being filmed that they were from Right Sector, the Ukrainian nationalist movement that Russia has been demonizing since Euromaidan.

The list of occasions where torture and threats have been used to extract ‘confessions’ or specific testimony could be continued, with this all too frequently at the instigation and / or with the connivance of so-called journalists from Russian propaganda channels.

These are grave infringements of international law and all those playing a role in them, including those so abusing their role as journalists, should be held to answer.