Church: Ukrainians’ Religious and Cultural Rights under threat in Crimea 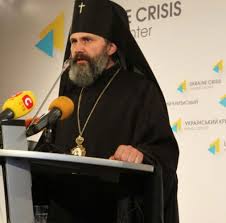 A year has passed of persecution, harassment and torture of Ukrainians in Crimea, a year in which there has been an offensive against the Ukrainian Church, Ukrainian education, Ukrainian culture and the stifling of Ukrainian media.  It is this, Clement, Archbishop of Simferopol and Crimea (Orthodox Church of the Kyiv Patriarchate), which has forced him to make an impassioned appeal on behalf of the Church and all Crimean Ukrainians to the international community to defend the national, cultural and religious rights of all Ukrainian nationals in Crimea.

As reported here, only the Orthodox Church of the Moscow Patriarchate has not come under serious pressure since Russia invaded and annexed Crimea last year.

Archbishop Clement mentions just some of the violations and pressure on his Church, including:

the threat on businesspeople supporting the Kyiv Patriarchate that they could lose their business, with this meaning that premises provided for parishes in Saki, Krasnoperekopsk and Kerch have been taken away.

Clement mentions that the local authorities are again auctioning premises in Simferopol that had been on long-term lease to the Orthodox Church of the Kyiv Patriarchate.  This is effectively the latest seizure of Kyiv Patriarchate buildings.

Persecution of Crimeans for their religious affiliations and seizure of the Church’s premises cannot be tolerated.  It is equally unacceptable, he points out, for Euromaidan activists who upheld their position through peaceful protest to be persecuted.

As reported here, one Maidan activist Oleksandr Kostenko has already been sentenced to 4 years imprisonment on absurd charges, and the Crimean prosecutor Natalya Poklonskaya informed last year of planned prosecution of some 50 other Euromaidan activists.

The Archbishop also condemns as unacceptable the closure of classes taught in Ukrainian; the destruction of the Ukrainian lyceum in Simferopol and effective destruction of seven other Ukrainian language schools.  The Ukrainian-language newspaper Krymska Svitlytsa has effectively been silence after the local authorities took away the newspaper’s premises.  This is combined with the unacceptable reduction in the amount of TV and radio programmes in Ukrainian.

He points also to the harassment and even prosecution of Ukrainians for their Ukrainian flag or Ukrainian embroidered shirts (details on all of this at Embroidery Day in Crimea: Detention, Interrogation & Ghoulish Threats

Archbishop addresses his appeal to the UN and OSCE; to the “state guarantors of Ukraine’s territorial integrity” who signed the 1994 Budapest Memorandum; and to all EU countries, asking them to take decisive measures for the defence of fundamental rights and freedoms in Crimea.

As mentioned, all faiths except the Orthodox Church of the Moscow Patriarchate are experiencing serious discrimination and effectively measures to drive them out of Crimea.

Other obstacles being place in the way of religious organizations functioning in Crimea are the excessive requirements for re-registration under Russian law and the considerably reduced freedom that Russian legislation allows.

Russia’s FSB is also carrying out surveillance of religious communities, as well as mosques.

In the case of both ethnic Ukrainians and Crimean Tatars, while there is undoubtedly religious persecution, people are also facing multiple forms of harassment, discrimination or even prosecution, with their fundamental rights gravely violated.

(see also: Faith under Fire and FSB Surveillance in Crimea).