Russian passports handed out in Transnistria as “tension rises” 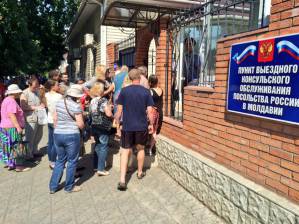 As the death toll from violations of an increasingly fictitious ceasefire in Donbas mounts, pro-Kremlin media are claiming rising ‘tension’ and fears of Ukrainian aggression in the pro-Russian breakaway Transnistria with people reported to be queuing to obtain Russian passports.

Although some assert that the demand for Russian passports simply “arose”, there appears to have been prompting.  Journalist Pavel Sheremet, who on June 13 reported queues outside the Russian consulate in Tiraspol, writes that a fast-track system for issuing Russian citizenship has been introduced.

This largely corresponds with a report on the pro-Russian ‘News of Transnistria’ site on June 10 that “Russia has allowed people from Transnistria to have double citizenship”.   “On June 8 in Tiraspol registration centres opened for the Transnistria population to receive Russian citizenship. If previously, Transnistrians had to travel to Kishinev for a permit to receive second citizenship, now this can be done either in the House of Officers, or in the Russian consulate”.   Those two offices are accepting applications for second citizenship every day from 8.30 to 12.00 from Moldovan and Ukrainian citizens.  Since Ukrainian law does not allow dual citizenship, Russia’s action seems at very least provocative.  Russia’s President Vladimir Putin has repeatedly presented his annexation of Crimea as being to protect Russians and Russian-speakers on the peninsula, and asserted Russia’s ‘right’ to use military force to protect its citizens in Ukraine.

Pro-Kremlin Russian media have been full of reports since Mikhail Saakashvili was appointed Governor of the Odesa Oblast effectively suggesting that Ukraine is seeking war with Transnistria.

Rossiyskaya Gazeta on June 10 claimed that a mere two weeks after Saakashvili became Governor, the territory under his control has begun preparing for war – “the second war for the ex-President of Georgia. Is it really for this that President Petro Poroshenko’s Washington advisers recommended that Saakashvili be appointed to a high regional post?”  The article goes on to suggest that Saakashvili is planning to fight Transnistria, though again his real enemy is the Russian army. “More precisely, the Russian peacekeepers posted in Transnistria”.

It cites the pro-Russian Ukrainian publication – Timer - as reporting that S-300 air defence systems are in the near future to be deployed in the Odesa oblast.  Timer asserts that the decision was taken by the Defence Ministry over the last few days, though it is not clear from the ministry site where they found this information.  Timer reports, without comment, that the air-defence systems are intended to “safeguard the country in the south of the Odesa oblast, on the border with Transnistria”.  The Russian media who have reported this all dismiss defence considerations, and Rossiyskaya Gazeta directly presents the alleged air defence systems as proof that Saakashvili is planning war.

On May 21. Ukraine’s parliament passed a number of laws revoking agreements with Russia in the military sphere, with these coming into force, after being signed by the President, on June 11.  Among other moves, Russian forces have now formally been refused transit through Ukrainian territory, with parliament explaining this as due to the need “to defend Ukraine’s national security and territorial integrity.”

A recent Stratfor report says that in fact there had been no land movement for over a year, but the move is obviously a major one for Russia which permanently has 1500 Russian forces which it calls ‘peacekeeping’ in the breakaway republic.  Stratfor also mentions the Timer report, and points out that if such systems were in place, they could be used if Russia tried to transport soldiers and goods to Transnistria through Ukrainian airspace.  All of this, Stratfor notes, presents a problem to Russia since the Moldovan route is also unreliable with Moldova not recognizing the breakaway republic and not wanting Russian forces there.

“Even if Russia continues its airlift operations into Transnistria, it will have to face the fact that its air route is inherently vulnerable and, in case of an outright conflict, would be lost easily”.

Stratfor notes that Russia cannot stop Ukraine and Moldova prohibiting transit, but their stand might “lead Russia to decide to reinforce its limited position in Transnistria to make it robust enough to withstand isolation or possibly assist in maintaining access”.

Thus far Russia has hurled a lot of allegations about Ukraine preparing for war and angrily dismissed the compelling reasons why, after Russia’s invasion of Crimea and heavy military support and involvement in Donbas, Ukraine should wish to secure its borders against attack.  Russia has also seemingly moved to make it much easier for Transnistrians to obtain Russian passports, with this increasing the number of ‘Russians’ in this breakaway region of Moldova, bordering on Ukraine, who need to be ‘protected’.

Whether this is more than ballast remains to be seen, but it seems worth noting the situation immediately prior to the war between Russia and Georgia in 2008 over South Ossetia and Abkhazia.  Then too, Russia suddenly began actively handing out Russian citizenship.  Russian commentator Anton Orekh noted then that Russian passports, having appeared in South Ossetia and Abkhazia suddenly began rapidly multiplying until “virtually everybody” had one. “And then the war began, and it transpired that in some strange way the Russian passport had helped develop, escalate and incite” the conflict.

Russian sources claim that 200 thousand (out of 500 thousand) Transnistrians already have Russian citizenship, so any increase does not seem of critical importance.  It is also unlikely that the West would, like Rossiyskaya Gazeta, view Ukraine’s digging of anti-tank ditches and armed checkpoints along the border with Transnistria as indication of plans to attack.  For the Russian audience, and those under Kremlin-backed militant control in Donbas who effectively have no access to other sources of information, the situation is different.  With a large Russian military build-up on the Russian-Ukrainian border, increasing Russian military engagement in Donbas and mounting violations of an ever more nominal ‘ceasefire’, such hype about supposed Ukrainian aggression may have a more sinister purpose.