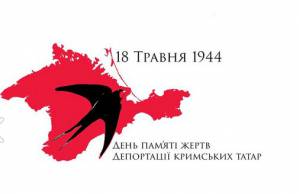 In 2015 the image chosen as symbol for the Deportation of the Crimean Tatar People was of a swallow, "that always returns home" against Crimea in red, an SOS to the world

Saniye Ametova, a highly-respected veteran of the Crimean Tatar national movement has spoken of the harassment and threats she faced when organizing a remembrance gathering on May 18 in remembrance of the victims of the 1944 Deportation.  She is due in court on June 18, and faces a hefty fine.

Ms Ametova explains that as the head of the regional mejlis, she lodged the application to hold a remembrance gathering a full 15 days in advance and, as in previous years, with the Voinki Village Council.  A permit was immediately issued, but then the district authorities learned of the meeting and began causing problems.  The organizers were summoned on both May 16 and 17 to Krasnoperekopsk to a round table ‘on countering extremism’, attended by the FSB [Russian security service], prosecutor and police.  They put pressure on her to change the time of the meeting.  She stood firm and eventually the meeting did take place.

The police appeared and threatened to take the young people away if they didn’t remove the placards.  This is no small threat given the number of young Crimean Tatars who have been abducted and / or disappeared under Russian occupation.  The organizers finally removed them, but did argue and Saniye Ametova was told: “Just wait, we’ll come for you tomorrow”.

Around 450 people took part in the meeting which the police openly videoed.

On May 19 two cars with 8-9 police officers turned up at Saniye Ametova’s home. They argued with her there, then took her to the police station where they tried to get her to either say who had written the placards or to say that she had written them herself.  She refused, as later she refused to sign the protocol they gave her.

“I said that I wouldn’t sign anything, that I would only write that I wouldn’t give testimony against myself and people close to me, in accordance with Article 51. Then they took me home and said: “Now forget about May 18”.

I answered: “Our people will never forget 18 May, even if you close our mouths”

Saniye Ametova and Yunus Nemetullayev, imam of the village of Dolinka (who held a placard calling for the release of Akhtem Chiygoz) have been summoned to court on June 18.

The fine will almost certainly be steep and it

Refat Chubarov, Head of the Crimean Tatar Mejlis [representative assembly] has issued a statement calling the court case against Saniye Ametova, scheduled for the first day of Ramadan, a reprisal and the latest shameful and criminal action of the occupation regime.

He explains that Saniye, whom he was at school with, is from one of the first families to defy the ban and return to Crimea in 1968.  “She is one of the steadfast and courageous activists of the Crimean Tatar national movement which she became a part of back in Soviet time.  Her authority is unfailingly high both among Crimean Tatars and among people of other nationalities”.

Ms Ametova is a widow and cares permanently for her son Nariman who suffers from a debilitating illness and is bound to a wheelchair.  This the occupation authorities are doubtless aware of.

In 2014, soon after Russia’s invasion and annexation of Crimea, the occupation authorities banned all meetings marking the seventieth anniversary of the Deportation.   They were forced to back down effectively because there was no way you could force people to not honour their parents, grandparents and others who suffered in 1944 and during the bitter years of exile. Refat Chubarov said at the time:

“It’s like telling everybody “Don’t go to your holy places, don’t visit your dead” If they prohibited you, how would you act?  Force can stop everything, or not everything – it won’t stop the human spirit.”

A year later, on May 18, 2015, the authorities again banned the main traditional gathering in the centre of Simferopol.  They also refused permission to the Crimean Tatar youth organization that traditionally holds an action entitled « Light a Candle in your Heart », instead organizing an ersatz event with their ‘own’ organization.   In response, dozens of young Crimean Tatars came out in Simferopol on Sunday evening and let off Chinese lanterns in memory.  The traditional “Light a Candle” was held throughout mainland Ukraine, with the main remembrance events on Sunday evening and Monday afternoon taking place in Kyiv’s main square.

Around 60 Crimean Tatars were detained, together with three journalists, on May 18.  The Crimean Tatars were planning to take part in a traditional car rally from Simferopol to Bakhchysaraj, and may have irritated the occupation regime with their Crimean Tatar flags – as well as one or two Ukrainian flags – but they had done nothing wrong. This did not stop the police taking them away and drawing up protocols.

Very many Crimean Tatars took part in remembrance gatherings in mainland Ukraine, having been forced to flee their homes or, like Crimean Tatar leader Mustafa Dzhemiliev, 6-months old in May 1944; Refat Chubarov; Sinaver Kadyrov and others – in forced exile after Russia banned them from their homeland.

On May 18 it was not only the victims of the Deportation whom Crimean Tatars were remembering, but also those imprisoned or exiled since Russia annexed their homeland.