“Stop using us as shields!” Donetsk protests against Kremlin-backed militants 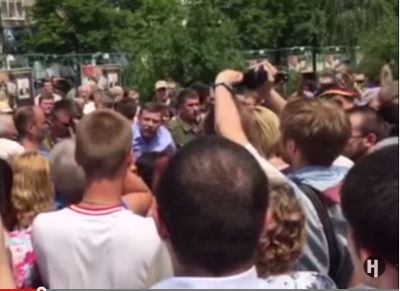 Screenshot from the Novvaya video

Around 500 people in Donetsk protested on Monday, demanding that Kremlin-backed militants stop firing rocket launchers from inside Donetsk and stop using civilians as shields.  Their demands were heard and reported by foreign reporters, not however by most Russians and residents of areas under militant control with the only TV channels available either concealing the demonstration altogether or, like Life News, claiming that the demonstration was in protest at the actions of the Ukrainian army.

It is not surprising that the militants and pro-Kremlin media wanted to muffle the protest.  Life News can say what it or the Kremlin likes, and consistently does so, but the accusations from tormented residents were clear.  They accused the militants of deploying rocket launchers within crowded city districts and of provoking return fire from the Ukrainian army, not returning fire if shot at.

Pavel Kanygin, correspondent for the independent Russian newspaper Novaya Gazeta reported the protest live.  The spontaneous protest began at 11 a.m., with around 500 residents from the Kievsky district around Oktyabrsky Rynok which is nearest the airport.  The protesters shouted: “Stop the war!”, “Give us back somewhere to live, our homes have been destroyed!” and “Get out all of you!”

“The general demands are for an end to military action, shelling which the self-proclaimed ‘Donetsk people’s republic’ [‘DPR’] fighters are carrying out from the territory of the Kievsky micro-district ‘Oktyabrsky Rynok’. The residents accuse the separatists of provoking through their actions return fire from the Ukrainian army on the civilian population. Every day from return fire people are dying. For example, on Sunday 10 residents were injured, two killed”.

The protesters blocked the traffic on the main road in Donetsk, with transport, including trolleybuses, paralyzed.

Kanygin reported that at 13.00 there was no noticeable reaction from the ‘DPR’ leaders, with only police who came up to both demonstrators and journalists to check their documents.  “They looked quite confused”.

At some point around then a person appeared from the ‘DPR’ administration.  He did not wish to identify himself but invited five representatives of the demonstrators to meet with the head of ‘DPR’ Alexander Zakharchenko.  This ‘initiative group’ was put in a car and taken away.

At 13.45, Kanygin writes, the main road was cleared and Zakharchenko came out on crutches (from a recent injury) flanked by men with machine guns.  He can be seen in the video here:  https://youtube.com/watch?v=TkDWt_oAk64

He told the crowd that the war could not be stopped for now, with this eliciting angry cries from the protesters.

An older woman shouted at Zakharchenko that he had promised them peace at the ‘elections’ (on Nov 2, 2014 – they were not even recognized by Russia).  Zakharchenko reacted as one might expect demanding to know the woman’s name.  She refused to give it, asking “so that they again shot us?”

“Most of the people demanded that the war be stopped, that the equipment be removed from the Kievsky district, that the shooting stop and that they don’t provoke return fire from the Ukrainian army”.

There were, however, some, Kanygin writes, who demanded that Zakharchenko attack the Ukrainian army, that he drive them further out, but so that their district wasn’t under fire.

Zakharchenko promised to help, resettle people in sanatoriums, but asked them to be patient as far as the war was concerned.

The France Press Agency and the Polish Gazeta Wyborcza reports of the protests are analogous to Kanygin’s, with AFP commenting that “the small but unusual demonstration outside the offices of the self-proclaimed Donetsk People’s Republic suggested that an undercurrent of resentment with the new authorities was running through the streets of eastern Ukraine’s main rebel-held town”.

The official ‘DPR’ site and Life News present the story very differently, with the residents demanding that the ‘DPR’ authorities “protect them from Ukrainian artillery bombing”, and Life News claiming that the protesters main demand was for the removal of Ukrainian forces from Donbas.

It is likely that even return fire by the Ukrainian military will be condemned by some human rights organizations, though it is difficult to understand what they should do when they come under fire and Ukrainian soldiers are killed virtually every day. Events of the last year, including the continued seizure of Debaltseve on the day after the Minsk II agreement, demonstrate that the militants will not stop within agreed boundaries, and in all cities liberated from the militants, such as Kramatorsk, Sloviansk and Mariupol, surveys suggest that the local population mainly fears the return of the militants, and wants the Ukrainian army to remain.

The Russian media constantly pushes the claim that Ukrainian forces are attacking and the Kremlin-backed militants only responding.  Monday’s demonstration made it clear that many residents of the main militant stronghold now have a very different view.