Transport blockade of Crimea a Gift to the Kremlin?Russian, or else: On how Russia is foisting its citizenship in CrimeaCrimean Tatars and others face citizenship dilemmaRussian methods: Calls for Crimea’s return to Ukraine could get you imprisonedMGIMO historian fired for article comparing Crimean annexation to Hitler’s AnschlussInformation channels at warDonetsk Front in Putin’s Dirty WarScurrilous rumours used to spread fear and distrust in Eastern oblastsAutoMaidan activist shot at near ChongarRussian troops already deployed in mainland UkraineThe Crimea is our Home: Get your troops out!Crimean "referendum" a grotesque farceCrimean Tatars call on all Crimeans to boycott "referendum"Avoiding Ukraine’s language minefieldsChief Rabbi and others dismiss Putin’s “anti-Semitic extremist” claimsRussian propaganda must be challengedWestern Media: Don’t distort the situation in Ukraine!Russia’s aggression poses dangers beyond Ukraine’s bordersCrimea: Anti-Semitic card and other provocation in time of siegeMr Putin: We ethnic Russians and Russian speakers don’t need protection
• Topics / Freedom of movement

Why is Ukraine restricting Crimeans’ rights? 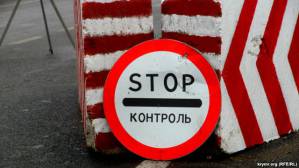 Human rights groups have condemned the new rules which Ukraine’s government introduced earlier this month for crossing into and out of Crimea.  The restrictions will hit ordinary Ukrainians hard, whereas business interests are continuing to prevent Ukraine exerting economic pressure that could improve the plight of Ukrainians living under occupation.

On June 4, Ukraine’s Cabinet of Ministers approved Rules for entering and leaving temporarily occupied Ukrainian territory.  The Crimean Human Rights Field Mission [CFM], Ukrainian Helsinki Human Rights Union, and other NGOs point to major failings in these rules which make movement into or from Crimea possible only through 24-hour checkpoints.

Border guards will be able to prevent a Ukrainian national from crossing what should be an administrative border between Crimea and mainland Ukraine.  They will be able to refuse a person permission on any formal grounds which gives enormous scope for abuse.  It will be difficult for the person to appeal against the decision, especially if the Ukrainian national is in Crimea and has been refused entry to mainland Ukraine.

The situation is especially difficult for foreign nationals, stateless persons and also for children / families travelling with children.

Foreign nationals and stateless persons living in Crimea will now need to get an entry permit from the Ukrainian Foreign Ministry, which is effectively impossible if they are coming from Crimea.  Alexandra Krylenkova from CFM points out that foreign nationals living in Crimea already face a huge number of problems in Crimea.  She says that the rules make the work of foreign human rights activists, journalists and lawyers in Crimea illegal from Ukraine’s point of view.  This can only exacerbate the already serious information and legal blockade in Crimea.

Olha Skrypnyk, Deputy Head of CFM and Head of the NGO Almenda, recently explained that rules should have been introduced in April 2014, as required by the Law on Temporarily Occupied Territory.

One of the fundamental problems is that although this must be an administrative border since Crimea is part of Ukraine, the rules are in part linked with a state border and this poses enormous problems regarding how they are applied and interpreted.

In the case of citizens 18 years and older, then the law on occupied territory applies, however if a person is under 18, then the 1995 rules for Ukrainian nationals crossing a state border are in force.  This seriously means that while parents will be crossing an administrative border, as per the law on occupied territory, their children will be crossing a state border.  Small wonder that Skrypnyk notes that “for border guards it won’t be clear whether this is a state border, or administrative”.

It is also not clear for parents, and she said in a different interview that in the last five days they have received a large number of calls from people worried about the new rules.

Not the right blockade

In a bitter comment on the new rules, a person signing himself Alexander Yevpatoriysky explained that he and all his family are Ukrainians living in Crimea.  They did not move to the mainland because they hope that Crimea will be returned to Ukraine.

He notes that it’s business as usual for those trading with Crimea, and points out that “Ukrainians, Crimean Tatars, Chechens and Russians (yes, there are also Russian patriots of Ukraine) are categorically against such trade.  Don’t bring anything here, don’t sell electricity. We will understand. Let the occupier bear full responsibility before “their people” whom they promised electricity, water and the land of milk and honey. Refat Chubarov (Head of the Crimean Tatar Mejlis) has spoken of this many times.  It is getting harder and harder for them to blame everything that goes wrong on Ukraine.  The local population are gradually beginning to see this”.

Instead of bringing such changes, or even a full economic blockade, that could put real pressure on the occupiers, Ukraine has introduced rules that effectively penalize Ukrainians.  They are now forced to travel to relatives, to family graves, using passes which some border guard could refuse to issue.  Or, in the case of children or foreign nationals, many of whom made their home in Ukrainian Crimea, they may be prevented altogether from travelling to mainland Ukraine from Crimea.