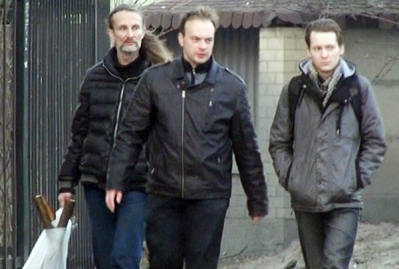 Photo from the case  material

3 men held in detention since March 2014 for placing a German flag on the FSB building in Kaliningrad in protest at Russia’s annexation of Crimea have been convicted of ‘hooliganism’ but sentenced only to the period already spent in detention.  During the trial it transpired that the 92-year-old veteran whom the FSB claimed had been ‘insulted’ did not know that the flag was not that of the Third Reich.  Nor was this alleged ‘victim’ the only person not quite clear which flag had been so ‘offensive’.

As reported, on March 11 last year 43-year-old Mikhail Feldman and 27-year-old Oleg Savvin from a local group called the Public Defence Committee, and a friend  from Moscow 24-year-old Dmitry Fonarev placed a German [Federal Republic!] flag in a glass on the roof of the garage of the regional office of the Russian Federal Security Service [FSB].   Feldman explained that they were simply pointing to the double standards whereby Russia officially approves of Russian flags being flown in another sovereign state, yet if a foreign flag is raised over Russian territory, this is seen as a crime.

The flag was immediately removed and the three received 10-15 day prison sentences for petty hooliganism.  The prosecution, however, decided that this was not enough and initiated criminal proceedings under Article 213 § 2 of the Criminal Code (group conspiracy to commit hooliganism motivated by political hatred and enmity or hatred to a particular social group).

The investigators initially claimed that the activists had raised the flag “as a symbol of Kaliningrad’s secession from Russia”, however by the time of the trial, which began in March, they had changed this to “insulting veterans of the Great Patriotic War” (WWII).  The indictment claimed that their jar containing the flag of the Federal Republic of Germany was “a flagrant infringement of public order, demonstrating overt disrespect for society out of motives of political hatred and enmity and hatred for a social group”. They allegedly “insulted and denigrated the feelings and political orientation of Russian citizens, the feelings of veterans of the Great Patriotic War and the memory of those killed in the Great Patriotic War”.

Following the hearing on March 24, Maria Bontsler, Savvin and Fonarev’s lawyer pointed out that there were no war veterans at all, since the only person with ‘victim status’ was the head of a Kaliningrad veterans’ organization born four years after the end of the War.

The FSB presumably decided to rectify this and found 92-year-old veteran Boris Glybin.  Natalya Zotova from Novaya Gazeta reports, however, that in court it became clear that Mr Glybin thought he “had been insulted by the flag of Nazi Germany”.  According to the group supporting the three men, they overheard a police officer also asking whether it had been a Nazi flag.

Zotova writes that the theme of ‘fascism’ permeated the whole trial.  The prosecution, as earlier reported, tried to claim that one of the men had shouted the Nazi “Sieg Heil!” when the flag was being raised.  The problem was that they originally claimed that Feldman had done this, and only switched to Fonarev after discovering that Feldman is Jewish.

Fonarev was also unimpressed, saying that such an action would raise the question of why they didn’t order a psychiatric assessment to check the mental faculties of a person raising his arm in a Nazi greeting at the sight of a modern German flag, and with a person who is Jewish beside him.

Zotova explains that Feldman and Savvin had previously been involved in protests in support of the Bolotnaya Square prisoners and Pussy Riot, and supported the protests against Ukrainian President Viktor Yanukovych.

It turns out the three had planned to raise the flag near the city administration building, but, Mediazona reports, they couldn’t find a ladder.  On the way home, Fonarev, the youngest of the three, caught sight of what seemed a convenient place and simply jumped up before the others had time to say anything and placed the flag.  He asserted throughout the trial that he’d had no idea it was the FSB building.

The prosecution claimed that all the men had been involved in the act, yet Feldman suffered from cerebral palsy as a child, and could not physically have carried out the ‘impugned offence’.  His lawyer Dmitry Dinze believed that the investigators had concentrated on him because he was very active in the Public Self-Defence Committee.  Feldman, for example, was also charged with possession of a small piece of the explosive hexogen (without any case, etc.).  Feldman asserted that this was planted on him, and certainly the investigators’ claim that he kept it at home was implausible since no trace of it was found in his flat.  It also had nothing to do with the flag raising.

The men had all been under surveillance before the flag raising incident, and the FSB were there immediately. Feldman was brought to the ground as he tried to photograph the flag.  The other two managed to run off but were soon caught.

On June 17 all three men were sentenced to 1 year and I month imprisonment on the ‘hooliganism’ charge, while Feldman also received a 6 month sentence on the charge of illegal possession.  Since the two charges were partially made concurrent, this came to slightly less than 14 months, meaning that all had effectively served the sentences.  Despite the absurdity of the case he judge was clearly not prepared to go against the FSB by acquitting the men, but at least allowed their release.