Who wants to turn Kyiv into another Donetsk?In Memory of Boris Nemtsov – Minute of NON-SilenceThe Anti-Semitic Coding in Putin’s Telegram to Boris Nemtsov’s MotherBoris Nemtsov: Yes, I’m afraid that Putin will kill meFar-right activists suspected of controversial journalist’s murder to remain in detentionTrial begins of two C14 far-right activists accused of killing controversial journalist Oles BuzynaNew surreal confessions from Ukrainian ‘SBU agent’ seized by Russia backed Donbas militantsThe attempt of arson of the flat of Oles Buzina (Kyiv)Decision on the claim against the newspaper “Kievskie vedomosti”, Oles Buzina and Marina Turovskaya “on the protection of honor, dignity and business reputation of T. Shevchenko” came into force after the consideration in the Kyiv appeal courtThe attempt of arson of the flat of Oles Buzina (Kyiv)
• Topics / The right to a fair trial 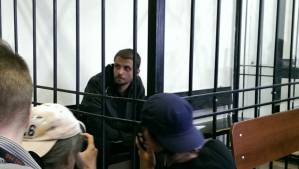 A day after Interior Minister Arsen Avakov blithely ignored the presumption of innocence and claimed that the murderers of controversial journalist Oles Buzyna had been caught, allegations have been made by Ihor Lutsenko, a well-known journalist and MP about a ‘war’ between the Interior Ministry management and one of the two far-right suspects.  There have been plenty of other reactions to the arrest of men involved both in Euromaidan and the fighting in Donbas,  including at least one disturbingly inadequate pronouncement from an MP.

Avakov stated on Thursday that 3 people had been detained and that other arrests were likely, but for the moment only two suspects have been named.  On Friday it was announced that the third person had been released without charge.

26-year-old Andriy Medvedko is a member of the extreme nationalist group C14, which researcher on the far-right Anton Shekhovtsov calls the paramilitary wing of the VO Svoboda party.  Medvedko – known in his circles as Menson - was involved in the occupation of the Kyiv City Council building during Euromaidan and in the Maidan self-defence.  He was the VO Svoboda candidate for a single mandate constituency in the 2014 Kyiv City Council elections, but was not successful.  He served for a few months last autumn in the Interior Ministry volunteer battalion Kyiv-2, but according to MP and journalist Ihor Lutsenko recently left, “due to the total corruption and sabotage in the police”.

The other suspect in Denis Polishchuk, who is 25 and a member of UNA-UNSO, a far-right nationalist organization which at least during Euromaidan merged with Right Sector.  He is reported to have been involved in protests against illegal construction work in Kyiv, and to be (or have been) commander of a unit of the 54th separate reconnaissance platoon.

Both men deny the charges and say that they were not in Kyiv that day. Whether the men are guilty is for a court to decide, and none of the comments here should be read as expressing an opinion either way.

Avakov asserted on Thursday that the “murder of Buzyna has been solved” and that  “the criminals were arrested this morning”.   The police, he continues, had investigated the murder over the last two months and obtained “direct proof of the role in this crime of a group of people, including those who directly carried out the murder”

He names the above-mentioned men and says that “they have established when, where and from whom they obtained the car in which they followed Buzyna. It was in this car that the criminals hid from the scene of the murder”.

He asserts that the car was found and material evidence removed from it which allegedly provides direct proof that the men committed the crime. He specifies that by direct proof, he means “DNA from clothes thrown by the criminals from the scene of the crime, analysis of marks in the car, eye witness reports; material from covert surveillance carried out by criminal investigators from the Interior Ministry.

During the court hearing on whether the men are remanded in custody, Ihor Lutsenko reported that the supposed DNA found was tested against chewing gum found in the household rubbish and alleged to have been chewed by Medvedko’s mother.  Whether Lutsenko is right in his assumption that women of her age do not chew gum can be disputed, but his mother apparently herself denies doing so.   There is also disagreement over alleged summonses which Medvedko allegedly ignored.  While the fact that the summons said 2016, not 2015 does not seem compelling (most of us would ring to check or simply assume a typo), Medvedko and his mother deny seeing any such document.

According to Bohdan Tytsky, seemingly also writing from the court, there are no eye witnesses who saw the killers’ faces, nor who saw the number plates of cars around.

In Polishchuk’s case the court was prepared to release him on bail of 5 million UAH, though the prosecutor’s office on Friday appealed against this ruling, saying that the charges are serious and warrant custody.  After a court hearing lasting many hours and ending only at 2 a.m on Friday morning, the court also remanded Medvedko in custody for 2 months.

The above details about evidence presented during the hearing may be inaccurate or incomplete.  It is certainly to be hoped that Avakov really does have the proof that he claims and that he will understand the need for transparency and openness.

Ihor Lutsenko was at the court hearing on Thursday evening and cannot be considered totally unbiased, but he has stressed that he is making no comment as to the men’s guilt or innocence.  He asserts, however, that he had arranged to meet with Medvedko on Friday, with the latter allegedly planning to pass over documents about wrongdoing by the Interior Ministry management.  He claims that there is a war on between Medvedko and some police heads who retained their posts after Maidan.

If true, then all such allegations need to be urgently investigated, and with maximum openness.

There have also been some disturbing attempts to minimize the crime or even suggest something ‘noble’ about gunning down the victim, who was known for his extremely pronounced anti-Ukrainian position often expressed on Russian television and for a scandalous book published 15 years ago about the Ukrainian poet Taras Shevchenko.

The most shocking was the Facebook entry by Ihor Mosiychuk, an extreme right MP with a background in neo-Nazi parties.  While mentioning that the suspects deny all charges, he goes on to add that “those who eliminated the Ukraine-hater Oles Buzyna should be awarded the title of Hero of Ukraine”.

Buzyna was gunned down near his home in the centre of Kyiv on April 16, less than 12 hours after the shooting dead of politician Oleh Kalashnikov, who had been active under the presidency of Viktor Yanukovych in organizing the titushki, or paid thugs, used widely against protesters during Euromaidan and earlier.  The two high-profile murders so close together, and the fact that the murder of Buzyna was reported to Russian President Vladimir Putin and commented on by him during his television phone-in interview, led to widespread assumption that the Russian security service might be behind the killings.

There were, however,  letters sent to political analyst Volodymyr Fesenko and the Opposition Bloc [made up of former members of Yanukovych’s Party of the Regions].  A group calling itself the Ukrainian Insurgent Army [UPA] claimed responsibility not only for the killings of Kalashnikov and Buzyna, but also for the deaths of former Yanukovych associates Mykhailo Chechetov, Oleksandr Peklushenko and Stanislav Melnyk.   The police had asserted that some of the latter committed suicide, and in the case of Chechetov, his apparent suicide note had been made public.

The letter was claimed to be a fake by Ukraine’s SBU [Security Service], however Anton Shekhovtsov confirmed that he had heard of a marginal group calling itself UPA in 2014. Thus far no mention has been made of Kalashnikov, nor of the claims made in the letter.

Medvedko at least was a member of C14, which has been around for some time and played an active role in the Euromaidan protests.  Shekhovtsov views the organization’s role as negative, writing in the above-cited article that “displaying racist banners in the occupied Kyiv City State Administration, attacking journalists, volunteer medical workers and other Euromaidan activists, demolishing the Lenin monument, staging a torch-lit march commemorating controversial Ukrainian ultranationalist Stepan Bandera – all these activities damaged the unity, as well as the image, of Euromaidan”.

If members of this organization are proved to have been involved in the murder of Oles Buzyna, then this should not cast a shadow on Euromaidan, but it might legitimately raise questions about C14 that have long needed to be asked. The first  reports from Thursday’s hearings and especially Lutsenko’s allegations have raised other questions.  This is frustrating given the fairly predictable resistance to any accusations against people viewed in a positive light as participants in Maidan and because of their role in defending the country.  Those who killed Oles Buzyna in cold blood must answer for their crime, but upbeat announcements that the crime has been solved need to be proven.