The Law and Crimean Tatars held hostage in Russian-occupied Crimea 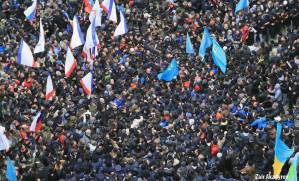 Ali Asanov has not seen his fourth child who was born in June, two months after Asanov was remanded in custody in Crimea on unprovable charges linked with a pre-annexation demonstration over which Russia has no jurisdiction.  Despite the lack of any possible grounds or legitimacy, he remains in custody, together with Crimean Tatar leader Akhtem Chiygoz and  Mustafa Degermendzhy.

The only good news is that TV ATR cameraman Eskender Nebiyev was released from custody on June 18. He is still facing the same nonsensical charges over a demonstration which ATR management have said he was covering for the channel.  Nebiyev was remanded in custody for two months after his arrest in April and the court hearing on June 18 was to decide whether to extend the detention or change the restraint measure.  His lawyer Dzhemil Temishev had asked the Mufti of Crimea Emiral Ablayev to offer to stand as guarantor which the latter fortunately agreed to do.

Akhtem Chiygoz, Deputy Head of the Mejlis or Crimean Tatar representative assembly has been in detention since Jan 29 and there seems no intention to release him despite the lack, not only of any legitimacy to this ’case’, but also of any specific grounds against him.  The whole case in fact appears aimed at undermining the Mejlis which has consistently opposed Russia’s occupation of Crimea.

There have been repeated reports of Crimean Tatars taken in for questioning or detained, with pressure put on them to give testimony against Chiygoz.  Thus far there is nothing to suggest that anybody has given such testimony or what it could consist of.

At present there are 7 ‘suspects’ in this case.  Eskender Kantemirov; Eskender Emirvaliyev and Talyat Yunusov were all released from custody in April or May.  Temishev seems to have been successful in getting all his clients released.

Little is known about Mustafa Degermendzhy who was arrested on May 7.

Ali Asanov is 33, and as mentioned a father of four.  He was arrested initially on April 15 and held in a police station in Bakhchysarai where, his family say, they tried to get him to ‘confess’ to causing the death of two people through carelessness, saying that they’d let him go home if he did.

The lawyer whom the Crimean Tatar Rights Committee found was rejected by the Investigative Committee who tried to get Asanov to accept a state lawyer.  In a number of cases in Russian-occupied Crimea and in Russia such state lawyers have effectively worked with the investigators, and tried to pressure detainees into ‘confessing’,

Asanov refused the services of such a state lawyer and he is currently represented by a lawyer from the Collegiate of Lawyers of Crimea.

The court in April, in considering a restraint measure, ignored the fact that Asanov’s wife was in her seventh month and the couple have three other children, and remanded him in custody for 2 months.  It argued that Asanov was charged with a serious crime carrying a sentence of 3 to 8 years, that Asanov denied the charges and that he had supposedly fled from the scene of the event and had not informed the police.  The fact that Asanov is a Ukrainian national was also mentioned with the judge accepting that the father of three, with another on the way, and an invalid father, would flee if not held in custody.

Most ominously “it is necessary to check that Ali Asanov is not implicated in other crimes, including of an extremist nature”.

On June 8, in another closed court hearing, Asanov was remanded in custody for a further 2 months.

There are unfortunately relatively few lawyers in Crimea willing to take on such cases and clearly a limit to how many people any individual lawyer can represent.  Asanov is also the sole breadwinner with small children and there simply isn’t the money for legal defence.

The Crimean Tatar Rights Committee and other human rights activists are calling on Ukrainian and international NGOs to help draw attention to a case of unparalleled legal cynicism.