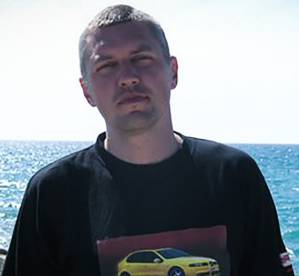 Ukrainian history lecturer Stanislav Klykh has been found in a solitary confinement cell in Russia’s Piatygorsk facing charges of fighting against Russia in Chechnya in the 1990s.  It can be easily proven that Klykh was never in Chechnya, which may well explain why Russia has concealed his whereabouts over the last 10 months and is refusing to allow lawyers chosen by the family to see him.

Klykh set off for Oryol last August to visit a girlfriend he’d met in Crimea and from then on his family knew essentially only that he was in detention.  Human rights activist Zoya Svetova has now been able to at least confirm where he is being held, and on what charges.

Svetova explains that she was asked by Klykh’s 71-year-old mother to help find her son.  Tamara Klykh discovered that her son had been detained in Oryol near the beginning of August from some stranger who rang her on her mobile. She was told that he had been jailed for 15 days “for disobeying police officers”.

She and her husband hurtled off from Kyiv to Oryol only to find that he was no longer in the SIZO [pre-trial detention centre].  They were told that he had been sent to Yessentuky.

At 2 a.m. on Aug 24 Klykh rang his mother on his mobile phone from the SIZO in Yessentuky.  He was hardly able to speak and said that he would tell her everything later, but that he was being accused of something that happened in the 1990s.  She received a text message the following day that he was being moved to Piatygorsk.”

That was her last direct contact with her son.  She was informed only after several months that the ‘case’ against him was being run by the North Caucuses Department of the Russian Investigative Committee.  The investigator – identified only as Kurbanov – proved totally elusive.  She managed to get through by phone once, but heard nothing sensible from him and after that he stopped answering the phone.

Oleksandr Kovtun, Ukrainian consul in Rostov on the Don has tried to see Klykh for the last 10 months, but been prevented.  It is clear, Svetova writes, that all information about the case is being treated as secret.

Efforts were also made, at Ukraine’s request, by Ella Pamfilova, Russian Human Rights Ombudsperson, to find out where Klykh was being held.  All was to no avail, however Svetova writes that she has managed to track down a couple of documents including the detention order from Aug 22, 2014 issued by a Yessentuky judge O. Frolova.  The detention has been extended several times since then and is now until Aug 21, 2015.   He has been formally represented at these detention hearings by a series of lawyers appointed by the investigators.  Svetova contacted one – Olga Chudentsova – who reacted extremely aggressively on the telephone to Svetova’s attempt to simply find out at least where Klykh had been when the lawyer was supposed to have represented him in January 2015.   The woman was clearly frightened of ‘revealing’ any information about a case in which she was supposed to be representing Klykh’s interests.

Svetova ascertained that Klykh is in the Piatygorsk SIZO by asking somebody in Stavropol to send him a parcel.  The person received confirmation that the parcel had been passed to him, the first time he would have received anything from the outside world for 10 months.

Svetova has been able to ascertain that Klykh is charged with taking part “in an armed group (band) and in the attacks (banditry) they carried out, as well as murders, and also with killing Russian military servicemen.”

He is alleged to have been a member of the Ukrainian far-right UNA-UNSO party, and together with Oleksandr Muzychko (known also as Sashko Bily, a controversial Right Sector activist killed in a police raid in 2014) and other unidentified individuals come to Chechnya. There he is accused of having taken part in attacks on civilians and Russian soldiers as part of an armed gang together with Aslan Maskhadov and Shamil Basayev.

This ‘case’ was opened back in 2000, then terminated many times, before being taken from the Chechen investigators and passed to the North Caucuses Department in Dec 2013.

There was no mention in it of Klykh or of another Ukrainian nationalist, Mykola Karpyuk.  As reported, the latter has not been seen at all since March 2014, and there have been suggestions that he may not be alive.

Only the nationality is right

Svetova notes that Klykh is accused of two crimes, one of which (murder of an official carrying out his duties) has been taken from the Soviet Criminal Code.

Klykh was studying history at Kyiv University in the 1990s, then working.  He was also living with his parents during most of the period in question.  Svetova points out that if Klykh had been represented by a proper lawyer, the latter would have immediately demanded the paperwork that proves that Klykh could not have been in Chechnya.

Karpyuk’s family also assert that he was never in Crimea.

If in Karpyuk’s case the investigators went for him because of his leading position in Right Sector which Russia has demonized since Euromaidan, Klykh seems to have been targeted purely because he was Ukrainian and had the misfortune to register as such in a Russian hotel.  Klykh is not well-known but there is mention of him on the Internet and it is clear that his views were, if anything, more pro-Russian than Ukrainian nationalist.

It is likely that Klykh has been held in solitary confinement since August 2014, and without legal defence.  Svetova writes, without disclosing sources, that he has sent letters to his mother, but these were obviously censored and did not reach her.  His mother has recently hired a Russian lawyer who is planning to travel to Yessentuky to speak with the investigator and arrange to see his client.

The investigators have no right to prevent Klykh from speaking with his lawyer, however optimism is limited following other cases over this last year, including the effective refusal to allow 73-year-old Yury Soloshenko to see the lawyer of his choice and the total secrecy about Karpyuk’s whereabouts.  The case is also ominously similar to that of Yury Yatsenko who, together with a friend, was held in custody, tortured, and then sentenced on far-fetched charges essentially because the two were discovered to be Ukrainian.

In the present climate in Russia that is viewed as incriminating.