Bribe to save your life: a permit system generating corruption 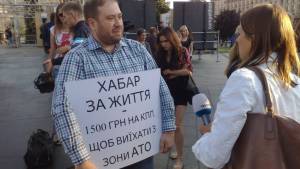 The placard held by one protester against the permit system for leaving territory under Kremlin-backed militant control was bitterly succinct. “A BRIBE FOR YOUR LIFE:  1500 UAH at the checkpoint to leave the ATO [anti-terrorist operation] zone.

Ukraine’s problems with corruption are legion and the commitment of its leaders to fight it often placed in question by close scrutiny.  In comparison with some forms of institutionalized corruption, the bribes reportedly generated by the permit system may seem minor.  They are not necessarily small to the people trying to cross into mainland Ukraine.  Nor do civic groups helping people in those areas or those who fled (‘internally displaced persons’, or IDP) see any benefit to justify the difficulties the permit system presents and the corruption it encourages.

As reported here, there is anger among both civic activists and those directly affected by amendments introduced by the SBU [Security Service] to its controversial permit system in place since Jan 21 this year.  The SBU had promised to simplify the system and invited civic activists to take part in a working group on this, but then announced changes which had not been discussed.  One of these, the banning of bus transport across the demarcation line has especially enraged activists and filled local residents of areas under militant control with despair.

The protest on Maidan Nezalezhnosti [Independence Square] in Kyiv on Monday evening was organized by Donbas SOS, the Donetsk Press Club and the ‘Donbas’ United Coordination Centre.  The people, all displaced former residents of the Donetsk and Luhansk oblasts were protesting at the permit system altogether, though the rally was prompted by the SBU’s June 16 amendments which have exacerbated an already difficult situation. 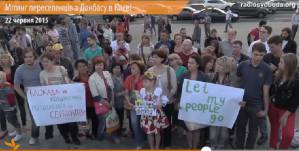 In his report, Luhansk journalist and former hostage Serhiy Sakadynsky writes that there is one main criticism of the permit system made by civic activists, enforcement bodies and politicians.  “The permit system creates problems solely for civilians, while being absolutely incapable of stopping the flow of illegally transported goods and freight”.

Sakadynsky notes that this criticism led to two contradictory statements.  The SBU promised to simplify the permit system, while President Petro Poroshenko, on the contrary, demanded that the blockade of the self-declared republics be tightened and any economic links stopped.

During a talk show on June 4 on this subject, the SBU representative did not answer the question put, namely why the permit system could not be abolished altogether, and replaced by passport (internal document) control, but did reiterate the promise to simplify the system.

All the above-mentioned civic initiatives consider that the June 16 amendments make the situation worse.  While an electronic system has replaced the old paper permits, the procedure for getting the permits remains the same: submitting documents to a coordination centre; at least 10 days wait and various bureaucratic problems. Sakadynsky acknowledges that there is a clause stating that in the case of people being forced to flee adverse consequences of the military conflict, etc., no permits are required, but points out that there is no clarity at all how this is to be carried out in practice.

Of the six new transport corridors, he says, only two are functioning.

As well as public transport, the new rules prohibit transport of any goods or freight by vehicle, although transportation of goods by railway is allowed.

Only private vehicles may now cross the demarcation line.  Sakadynsky writes that pedestrians are also not being allowed to cross into areas under Ukrainian government control (this contradicts other reports).  They are told to find car drivers, however not all will agree, and many are already full up.  There are always those who will leap in with solutions, however, either buses with a change, as people make their own way across the demarcation line, or using loopholes in the rules. All of this has massively increased the cost of travelling between Kyiv and Donetsk or Luhansk.  If before you could do the trip for 700-800 UAH, now changing at the demarcation line, you pay a thousand, without a change (by minivan, for example, which is classified as a private vehicle) – 1500 UAH.  “That for the moment is the only obvious ‘achievement’ of the new permit system.”   It is one which effectively grounds a large number of people.

Civic activists are demanding that the SBU:

-        Increases the capacity of the checkpoints to avoid huge queues;

-        Liberalize the rules for transporting medical and basic necessities;

-        A tolerant attitude by border guards and other enforcement officers to people crossing the demarcation line.

The other key complaint from the 200 or so protesters will not be helped by the above and reiterates the objections to the permit system raised since its inception. While the changes will prevent some Donbas residents from moving at all, for others it simply extends the number of people taking bribes and the amounts demanded.

(Radio Svoboda’s video of the protest can be seen here)