“Jewish pogroms in Ukraine” that we all missed 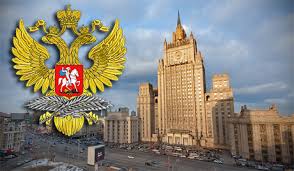 Russia’s Foreign Ministry is again aware of ‘pogroms’ that experienced researchers of anti-Semitism and xenophobia in Ukraine and human rights groups would seem to have not noticed. The ministry’s keeping the details to itself however

The BBC Russian Service reports that Konstantin Dolgov, the Russian Foreign Ministry’s Human Rights Representative devoted most of his June 18 press conference to accusations of “rehabilitation and glorification of Nazism” in the Baltic republics. The BBC asked for examples of parties and slogans, but received none, instead being referred to the recently published Russian Foreign Ministry ‘Report on Neo-Nazism in Europe’.  Dolgov then switched his attention to Ukraine, claiming as follows:

“Anti-Semitic slogans, the pogroms beginning in our times, at the beginning of 2014 in several Ukrainian cities. Jewish pogroms. They daubed the relevant stars in apartment entrances, homes”.

In refreshing contrast to many reports in English, the BBC Russian Service states quite clearly that it is not aware of any such ‘Jewish pogroms’ in Ukraine.  With respect to the Baltic states, Dolgov mentioned only one allegedly neo-Nazi slogan: “Latvia for Latvians” without stipulating where he found it.

The phrase “Russian for Russians”, and many others could easily have been cited, but Dolgov presumably feels, along with the Foreign Ministry, that there is no need to look closer to home.  There is no entry on the Russian Federation at all, despite considerable evidence of problems in Russia, as highlighted in the latest, as well as previous reports by the Sova Centre, and the ongoing trial in connection with the murderous Russian neo-Nazi BORN party.

Vyacheslav Likhachev, who has been closely monitoring all manifestations of anti-Semitism in Ukraine for over 11 years appeared amused by the disclosure of all that appeared to have escaped his attention.

Judging by the above-mentioned report on ‘Neo-Nazism’, it seems that Russia’s Foreign Ministry sees no reason to study Likhachev’s detailed reports on the situation in Ukraine, although these are published in Russian and easily accessible.

The Russian report, in fact, makes no mention of ‘pogroms’, but paints a truly alarming picture, claiming that “the rise of neo-Nazism and radical national in Ukraine over recent times and particularly after the anti-constitutional state coup of February 2014 has reached unprecedented proportions.”   There are supposedly “purges and enforcement, punitive operations against those labelled for “anti-Ukrainian activities”.

The report is well-worth the attention of western governments, though not as a warning about rampant neo-Nazism.  The methods used are identical to those seen on Russian propaganda sites which the EU has belatedly recognized as a problem.

A simple example is seen at the beginning of a long rant about the indeed far-right Svoboda party.  This, the report, published in April 2015,   states received 10.44% of the votes in the 2012 parliamentary elections.  No mention is made of the fact that after the supposed ‘coup’ in 2014, Svoboda gained 1.16% of the votes in the presidential elections and 4.71% in the parliamentary elections, below the threshold for entering parliament.  ‘Right Sector’ which has been particularly demonized in Russia did even more abysmally, although you would never guess this from the report.

It is certainly true that some of those fighting in volunteer battalions like ‘Azov’ have neo-Nazi views, and there are some far-right radicals from other countries fighting in Donbas.  The report, however, makes no mention of the proven links between Kremlin-backed militants and Russian neo-Nazi and fascist movements and the very significant number of those movements’ followers fighting in Donbas. .

There is also no mention of the openly anti-Semitic utterances made by the puppet leaders of the so-called ‘Donetsk and Luhansk people’s republic’.  Igor Plotnitsky just last week made world headlines for his attempt to claim that Euromaidan means ‘Jewish Maidan’, and  as being Jewish (in Russian the word Jewish has the same first letters as European).  The jibes later in Plotnitsky’s address got less attention, though they warranted it, and echoed a previous statement from Plotnitsky and Alexander Zakharchenko expressing contempt for the “pathetic Jews now in power in Ukraine”.

The Kremlin’s credibility on Ukraine’s alleged ‘anti-Semitism’ has already been ripped to shreds by Jewish leaders, by observers from other countries and by the stream of fakes which are promptly exposed.  The claims can seem so absurd as to not worth bothering to refute.  The problem is that it takes effort to distort and manipulate facts, and the Kremlin is expending vast amounts of money on pounding its ‘Ukrainian anti-Semitism’ narrative as well as on raising doubts about the honesty of any who question it.

Attention to the propaganda is belated, and very much needed, but it might be worth starting with Russia’s Foreign Ministry.