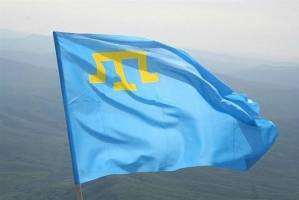 The authorities in Russian-occupied Crimea have shown no originality on this Crimean Tatar Flag Day, repeating a format already tried on previous dates of importance to Crimean Tatars.  Having banned the traditional events to mark the day planned by, among others, the Mejlis, or Crimean Tatar representative assembly, they again found time to issue prosecutor’s ‘warnings’ to Crimean Tatar and Ukrainian activists against organizing any events, while in Bakhchysaraj they phoned around Crimean Tatars in the hope of enticing them to attend pro-regime-organized events.

Crimean Tatar Flag Day is a relatively new festival, but one of symbolic importance since the date chosen – June 26 – is in memory of the second Qurultay or Crimean Tatar National Congress – the first after Crimean Tatars began returning after the Deportation.

The authorities three times turned down applications from the previous organizers and the latter issued a statement saying that they would not be holding the traditional festivities and car rally.  They called on Crimean Tatars to mark the day by raising the Crimean Tatar flag in their own homes and on their cars, and to wear Crimean Tatar national symbols.

The QHA Crimean News Agency reported that at least two members of the Mejlis – the Deputy Head Ilmi Umerov and Dilyaver Akiyev, as well as Ukrainian activist Leonid Klimkin – received visitations with warnings from the prosecutor’s office, not to try to organize meetings.

In the meantime, pro-regime organizations have been organizing look-alive events with a car rally planned, as well as an event in which huge Crimean Tatar flags will be let off into the sky.  The organizers say that “experts from the Simferopol Book of Records” will be recording both the car rally and the size of the flag.

Nariman Dzelyal, First Deputy Head of the Mejlis, told Radio Svoboda’s Crimean Service that the Mejlis considers it unacceptable when those with access to administrative resources try to monopolize such occasions and obstruct others from organizing events.  He pointed out that exactly the same thing had been seen on May 17, when the youth group which had traditionally held the “Light a candle in your heart” action in memory of the victims of the Deportation were prevented from doing so.  As reported here, another organization close to those in power took over, and typically prevented journalists from being present at their event.

Dzhelyal said that he was pleased that most young people want nothing to do with such “manipulation and political fraud”.

Events will be held in many cities in mainland Ukraine marking Crimean Tatar Flag Day.  As part of a “We are all Crimean Tatars” action, the Crimean Tatar flag has, since setting off from Kyiv on June 3, been carried from city to city and is expected to be brought finally home, to Crimea.

The action has been organized and carried out by the Crimean Tatar Youth Centre and Mejlis. The  main celebration of Crimean Flag Day will be in Kyiv with a procession, car rally and market planned.  The procession will be from St Sophia Square to Shevchenko Park where the gathering will be addressed by Crimean Tatar leaders Mustafa Dzhemiliev and Refat Chubarov, both of whom have been banned by Russia from their homeland.