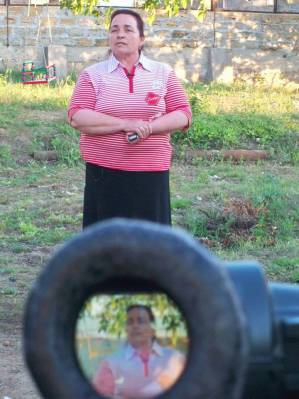 A Crimean court has imposed a 10 thousand rouble fine on Saniye Ametova for a meeting in memory of the victims of the 1944 Deportation that had been agreed in advance with the authorities.  Yunus Nemetullayev, a village imam was fined the same amount ostensibly for taking part in a meeting, though probably because of the placard he had with him calling for the release of imprisoned Crimean Tatar leader Akhtem Chiygoz.  There were similar placards at the meeting organized by Saniye Ametova.

The court hearings had both been adjourned for a week, but if the judges were discomforted by the overt illegitimacy of their rulings, they did not show it.

Saniye Ametova is a much-respected veteran of the Crimean Tatar national movement and head of a local mejlis, or Crimean Tatar self-governing body.  She is also a widow with a severely disabled son and the fine is steep.

It is also entirely lawless since Ms Ametova had lodged the necessary application to hold a remembrance gathering on May 18 15 days in advance.  A permit was immediately issued, but then the district authorities learned of the meeting and began causing problems.  The organizers were summoned on both May 16 and 17 to Krasnoperekopsk to a round table ‘on countering extremism’, attended by the FSB [Russian security service], prosecutor and police.  They put pressure on her to change the time of the meeting.  She stood firm and eventually the meeting did take place.

The police appeared and threatened to take the young people away if they didn’t remove the placards.  A number of Crimean Tatars have been abducted or simply disappeared without trace since Russia’s annexation of Crimea, and the organizers did finally remove the placards.  Saniye Ametova was told that they would come for her the next day.   is no small threat given the number of young Crimean Tatars who have been abducted and / or disappeared under Russian occupation.  The organizers finally removed them, but did argue and Saniye Ametova was told: “Just wait, we’ll come for you tomorrow”.  About 8-9 police officers in two cars did indeed turn up and took her to the police station.  They tried to get her to admit to writing the placards herself or say who had.  She refused.

As mentioned Unus Nemetullayev was almost certainly fined for a similar reason:  he had held up a placard calling for the release of Akhtem Chiygoz.

Akthem Chiygoz was first arrested on Jan 29, 2015, and he remains in custody.  He and around six other Crimean Tatars are charged in connection with a demonstration which took place on Feb 26, 2014, i.e. the day before Russian soldiers seized control, and over which Russian-occupied Crimea can have no jurisdiction.  There were around 10 thousand Crimean Tatars and Maidan supporters who gathered outside the parliament building in Simferopol that day because they feared plans were underway to push through a bill changing Crimea’s status.  They were opposed by a smaller number of pro-Russian demonstrators led by Sergei Aksyonov, then the leader of a marginal pro-Russian party in the Crimean parliament.  Aksyonov was installed as self-proclaimed leader on Feb 27 after Russian soldiers seized control.

The ‘case’ is by definition absurd and is widely viewed as aimed at organizing a show trial against the Mejlis and terrorizing Crimean Tatars into silence or exile.