KHPG: On the Armed Forces Headquarters initiative seriously restricting freedom of movement in connection with mobilizationAmbush in KharkivAmbushes as quota-filling ’mobilization’ continue in the Kharkiv oblastEyewitnesses Ponder Real Reasons Behind Raid On Kyiv Nightclub, Question Excessive ForceRussia sends forcibly mobilized Ukrainians from occupied Donbas to die as ‘live bait’ at the frontlineCovert mobilization and Ukrainian conscripts from occupied Crimea sent to die in Russia’s war against Ukraine Russian legislative changes would mean school leavers can officially be sent to fight in Ukraine Desperate plea from the wives of Donbas men seized and sent to fight Russia’s war against UkraineThe letter on the attempt to remove the Ombudsman from the position – to all people concernedRussia deports Ukrainians to occupied Donbas, forcing them to fight its war against Ukraine Russian invaders create “real concentration camp” to torture Ukrainian prisoners in Kharkiv oblast Russia is forcibly ‘mobilizing’ Ukrainians from occupied territory to fight its war against Ukraine Russia plans total ‘filtration’ of Mariupol men and forced ‘mobilization’Russia is forcing Ukrainians from occupied Crimea and Donbas to fight in its invasion of Ukraine Ukrainians tortured and imprisoned in Donbas for supporting Ukraine, with Russia blocking their release When Russia shouted that Ukraine had attacked Crimea: A tale of torture and fabrication A brief description of the KHPG strategic litigations in the first half of 2021Application practice of Article 110 of the Criminal Code of UkraineA brief description of the KHPG strategic litigations in July–December 2020Monuments and graves provide damning proof of Russian military involvement in Ukraine
• Topics / Army 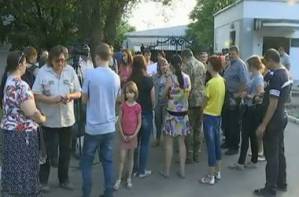 There have been a worrying number of cases recently where young men of conscription age were effectively pulled off the street and taken to military recruitment offices.  While the regional military commissar claims that all is in order, representatives of the Kharkiv Human Rights Group are adamant that this is in breach of the Constitution and can be viewed as abduction.

Around 40 parents of conscripts are reported to have picketed the regional military recruitment office on June 24, and since.  They complain that their sons were grabbed in the metro, on the street or in public places and taken to the military recruitment office where they are being held, without being allowed to see either their parents or lawyers.

Yana Smelyanska from the Kharkiv Human Rights Group, for example, is trying to help a mother from Alchevsk in the Luhansk oblast. Her son has finished technical college and had arrived, together with his mother, in Kharkiv to take an exam when he was taken away by plain-clothed men.  They had to scour all police stations and recruitment officers to find out where the young man is being held.  And held without any justification since he is registered in Luhansk, and cannot be called up in the Kharkiv oblast.

Yury Kalhushkin, Deputy Regional Commissar asserts that they are behaving in accordance with the law on military service.  This states that young men of conscription age must themselves appear at the military recruitment office within 10 days of the President’s decree coming into force, which means April 1.  He also claims that only those who live too far away are presently being held at the collection point.

Natalya Okhotnikova, from KHPG, is scathing in her response.  She says that in the cases before KHPG, there is no evidence that the young men tried to avoid military service.  There is effectively confirmation of this in the reports that the young men are only handed summonses in the recruitment office before being sent for a medical.  Okhotnikova and other human rights activists consider this all to be a violation of the young men’s constitutional rights and tantamount to abduction.