Criticism of Government cleaning (lustration) law swept under the carpet 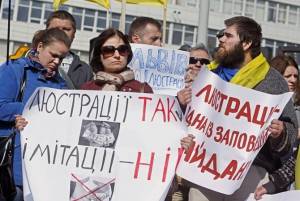 Yes to lustration, no to imitation

The Council of Europe’s Venice Commission made some very critical comments and recommendations about Ukraine’s law on ‘cleaning up the government’, though you wouldn’t know it from reading the Justice Ministry’s mention of it.  In a report disturbingly reminiscent of attempts to muffle the truth during the presidency of Viktor Yanukovych, the Venice Commission is alleged to have found that the law fully complies with international standards.  It supposedly mentions only « technical comments » which the Ministry promises will be taken into account.

The Venice Commission report is now available in Ukrainian on the same website, and its negative assessment was reported from the outset, most wittily by Oleksandr Puzanov in his article “Death in Venice. For the moment clinical”   Some of the negative comments were even mentioned by one of the law’s main advocates, MP Yehor Sobolyev.  However, if Puzanov’s article openly states that the law received a ‘C-‘ from the Venice Commission, Sobolyev’s blog implies a higher grade.

Sobolyev also presents the criticism of the bill as emanating solely from people like Serhiy Kivalov and Serhiy Lyovochkin, associated closely with Yanukovych’s regime. This is misleading since most of the concerns found in both the Venice Commission’s damning Interim Report and its slightly softer Final Report have been raised by legal experts and human rights activists since the law was passed on September 16, 2014.

Criticism from the latter was not based on a wish to see people who seriously compromised themselves under Yanukovych remain in their posts.  It focused on fundamental failings of the law which unwarrantedly infringes people’s rights while not achieving the stated aim of cleaning up the government.

The Venice Commission in its Final Report dated June 19, 2015 highlights flaws in the Law on Government Cleaning [the ‘Lustration Law’] that are much more than ‘technical’.

The Commission explains that since the Ukrainian authorities had “engaged in a constructive dialogue on the improvement of the law”, they decided to issue their Dec 2014 report as interim.  In April the Commission received a set of draft amendments to the Law, and although these have not yet been passed, they are taken into account in the Opinion, as are proposed amendments to electoral law and the Law on Restoration of the Trust in the Judiciary in as much as they are needed to understand the scope of application of the Lustration Law.  The Venice Commission earlier issued a separate opinion on the Law on the Restoration of Trust in the Judiciary finding that it was in need of revision.  Amendments are currently awaiting its consideration.

The Justice Ministry and Sobolyev stress the Venice Commission’s basic acceptance of the legitimacy of the aims behind the Lustration Law, but do not give due attention to the very considerable qualifications made.

Ukraine’s Lustration Law, the Commission notes, is broader in scope from lustration laws adopted in other countries.  “It pursues two different aims. The first is that of protecting the society from individuals who, due to their past behaviour, could pose a threat to the newly established democratic regime. The second is to cleanse the public administration from individuals who have engaged in large-scale corruption. The term lustration in its traditional meaning only covers the first process”.

Both aims are legitimate, but are unlikely to be well-served by being merged into one law.

Yes, “a newly democratic state might have good reasons to remove from the public life, on a temporary basis, individuals who occupied high-level positions under the previous, non- democratic regime or who engaged in serious human rights violations. Doing so limits the risk that the new regime be overturned or tarnished from the beginning by non-democratic practices”.

However “during the meetings with the Ukrainian authorities, the Venice Commission delegation has repeatedly expressed the view that trying to deal with the two challenges in the same piece of legislation, and while using identical means, is not optimal. Lustration on the one hand and anti-corruption measures on the other hand, though both legitimate, are not identical in nature. They are also not subject to the same international legal standards and require different means to fight them.”

This is anything but a ‘technical’ issue, but is totally ignored in the Justice Ministry report.  The Venice Commission cannot force Ukraine to do anything, but its opinion is clear:  the Ukrainian authorities should “consider either removing the sections of anti-corruption to another piece of legislation (The Law on the Principles of Preventing and Combating Corruption) or, at least, modifying the cleansing procedure with respect to individuals falling under Article 3(8) of the Law on Government Cleansing to reflect the differences between lustration in the traditional sense and anti-corruption.”

The Commission does not dispute that in order to defend its democratic system, Ukraine may need to “exclude from the access to public positions those individuals who might pose a threat to the democratic system and/or have shown themselves unworthy of serving the society”.

The legal regulation must, however, be clear, non-arbitrary and proportionate.  The Commission looks at the “rather extensive number of positions” and reiterates that an overbroad application of the Law would both risk violating individual fundamental rights, and “affect the functioning of the whole Ukrainian civil service and social peace, giving rise to serious antagonisms and stimulating the rancour of those working under the former regime being disqualified from public functions in a disproportionate manner. A large scale lustration process would result in enormous bureaucratic burdens and might lead to an atmosphere of general fear and distrust.”

Neither the Law itself nor the proposed amendments remove “professional judges” from the list of those subject to lustration, meaning that they would be subject to two laws. “The Ukrainian authorities have argued that judges will only be subject to the anti-corruption measures under the Lustration Law, this is not clear from the text of the law. The relationship between these pieces of legislation remains unclear.”  The Commission sees no intrinsic problem with inclusion of judges of the Constitutional Court in the list.

The criteria for government cleansing are extremely broad with large numbers of people excluded from occupying a number of posts for 5-10 years because of positions held in Soviet times or under Yanukovych.

The Commission cites here, as on other occasions, the 1996 Parliamentary Assembly of the Council of Europe’s Guidelines on Lustration which state that lustration shall only be directed against persons who played an important role in perpetrating serious human rights violations or who occupied a senior position in an organization responsible for serious human rights violations.

The Venice Commission is extremely careful in its assessment here.  While suggesting that the range of posts covered goes far beyond the criterion stipulated, namely that they were senior posts, it goes on to note that the Ukrainian authorities are better placed to assess which public institutions played a prominent role.

In fact the list of posts has been criticised within Ukraine as far too broad.  As well as the practical consequences were some departments to be suddenly stripped of managerial staff, it is also quite clear that certain people whose posts fall within the criteria are unlikely to be touched, placing the law in danger of selective application.  It should also be noted that however critical we may be of people who held positions in the Soviet Communist Party or in Yanukovych’s administration, the lack of such details on somebody’s career resume does not per se make a person suitable. Certain appointments, one in particular, over the last year have raised equally strong concerns.

The measures allegedly aimed at fighting corruption in the bill come in for serious criticism.  Application of Article 3(8) on irregularities in a person’s financial declarations, etc. “could result in thousands of persons being excluded from the access to public positions for 10 years on the basis of irregularities in their financial data and being put at pair with individuals responsible for serious human rights violations and crimes.”

The Opinion gives a detailed and largely critical assessment of other aspects of the Lustration law as well.  Ukraine’s failure to take the recommendations from this highly authoritative Council of Europe body on board will reflect very badly on the country as a whole. In the light of the extremely piecemeal, and sometimes scandal-filled measures on fighting corruption and first meagre results of ‘lustration’, refusal to address the real problems in the Lustration Law must also place in question Ukraine’s leaders’ commitment to a fundamental commitment made during Euromaidan.  Cheap populism and imitation of real measures are not what they promised, and categorically not what Ukraine needs.