Euromaidan: A Year of Impunity and what went wrongEx-Berkut officer on trial over AutoMaidan ambushEx-Berkut officers arrested on suspicion of involvement in Maidan killingsWhere are 13 mysterious Berkut sniper suspects?Who (hasn’t) answered for crimes against Maidan?Maidan killings suspect missing after being released from custodyTwelve detained on suspicion of involvement in the gunning down of Maidan protesters (updated)Blood and Berkut Sniper Bullets on the President’s HandsMustafa Dzhemiliev on Maidan: I’m proud of you, dear fellow UkrainiansBerkut snipers aimed at protestersWaiting for more bloodshed?Open threats and covert plans as ‘hostage law’ deadline nearsRuling majority takes hostages through new “amnesty law”Ruling party absolves Berkut of liability for Nov 30Ukraine’s ruling majority slips in dangerously repressive lawTraffic police deployed against EuroMaidan protestersTraffic police prevent Euromaidan protesters reaching KyivEuromaidan: Lviv universities come out in support of student protest“The government has made its choice, now it’s our turn”UCU: The Fate of 46 million Ukrainians is at stake
• Topics / The right to a fair trial
• Topics / Human Rights Violations associated with EuroMaidan 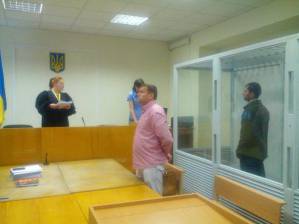 A police lieutenant colonel, working in the police force until his arrest this month, has been remanded in custody on suspicion of involvement in the killing of 39 Euromaidan protesters in Kyiv on Feb 20, 2014.  Oleh Yanishevsky was deputy commander of the Kyiv Berkut special force unit in Feb 2014 and lawyers representing Euromaidan victims or their families call this the most significant arrest thus far.

Given the criticism expressed both within Ukraine and from an over the lack of progress in investigating the crimes, it is possibly no accident that the arrest was  on June 26, during a Security Service [SBU] briefing given to members of foreign diplomatic missions in Ukraine.

Four ex-Berkut officers are already in custody on charges over the same killings, although it appears that Yanishevsky may also be charged with issuing orders to kill.

Lawyers and activists were following the June 28 court hearing on a restraint measure closely as the same Pechersky District Court had on Sept 19, 2014  released Dmytro Sadovnyk who was in charge of the Berkut unit suspected of shooting 39 protesters.  Sadovnyk was placed under house arrest and promptly disappeared.  Given the serious charges against him, the court had needed to provide grounds for changing the restraint measure to house arrest.  Judge Svitlana Volkova was convinced by the fact that he has a wife, three children and a flat in Kyiv, and had received a good character reference.

Sadovnyk had been arrested together with two subordinates – Pavlo Abroskin and Serhiy Zinchenko – who were not released and who remain in custody.  Sadovnyk’s release and immediate disappearance and the general lack of movement in the investigation caused public anger, and other ex- Berkut officers since arrested have all been placed in detention.  This is not to suggest that there have been many arrests.  On Feb 24, 2015, two former Berkut officers – Oleksandr Marynchenko and Serhiy Tamtura – , on the same charges over the death of 39 Maidan activists on Feb 20.

Most other former Berkut officers from that unit have not been charged, and were doubtless among those who gathered on Sunday to show their support for Yanishevsky.

As reported, three ex-Berkut officers have also been in custody since April 2015, charged with involvement in the bloody police dispersal of the peaceful procession to the Verkhovna Rada on Feb. 18  Five people were killed; 62 received gun injuries and a further 400 – other injuries. The Prosecutor General’s Office that investigators have established the involvement of the former commander of the Kharkiv regional Berkut unit and two subordinates.  They have been charged under Article 365 § 3 (exceeding official duties with this leading to grave consequences) and Articles 15 § 2 and 115 § 2 (attempted murder).

While these people are in custody, and some others are on the wanted list believed to be in hiding in Crimea (including Sadovnyk) or Russia, there have not yet been any convictions by a Ukrainian court over any of the violent crimes committed during the Euromaidan protests.

A recent report by civic organizations and lawyers was appropriately entitled “.  It analyses every incident under investigation (we hope) by the prosecutor’s office from the first violence against a group of Lviv students on Nov 25, 2013 to the mass gunning down of unarmed protesters on Feb 20, 2014.

At on the report, Pavlo Dykan, one of the lawyers representing victims, listed just some of the problems with the investigation into the killings in Jan-Feb 2014, namely: the lack of sufficient technical backup; procrastination with qualifying the alleged actions of people arrested back in April 2014; Interior Ministry sabotage; court trials being dragged out and others.  He said then that there had effectively been no progress in the investigation into the beating by police officers during the events on Bankova St on Dec 1, 2014 and during the storming of Maidan in the early hours of Dec 11, and many others.

The report was put together by Euromaidan SOS, OZON [a civic initiative monitoring peaceful assembly and attempts to restrict it], and the Centre for Civil Liberties with the intention not only of demonstrating what had not been done, but of understanding what had gone wrong.

Many of the criticisms were identical to those presented in the International Advisory Panel’s damning ,   including scathing comments about the “uncooperative attitude” from the Interior Ministry and the SBU.