Over 1.3 million people forced from Donbas and Crimea need a decent law 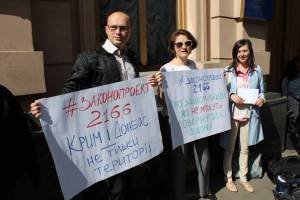 Ukrainian human rights organizations have addressed an appeal to the country’s legislators to enable swift passage of a bill urgently needed to help people forced from their homes by Russia’s invasion of Crimea and military conflict in Donbas.

In the open appeal addressed to Parliamentary Speaker Volodymyr Groisman, the heads of factions and all MPs, the ‘Human Rights Agenda’ coalition explain that although the Law on ensuring the rights of internally displaced persons [IDP] is in general a positive step forward, there are a number of flaws and several norms which do not meet international standards.

With the UN High Commissioner on Refugees estimating that up to 1 million 300 people in Ukraine have been displaced – the largest number since the end of World War II, the need for proper measures is urgent.   A draft law has therefore been drawn up by a group of MPs in cooperation with human rights organizations on vitally needed amendments.  Draft Law No. 2166 was passed as a basis over a month ago, on May 19, and Human Rights Agenda is calling for it to be placed on the parliamentary agenda and adopted in full as soon as possible.

The draft bill both simplifies and accelerates procedure for displaced persons to find work; to get unemployed status and to reinstate documents.  It revokes the unwarranted dependence on registration of place of residence, and broadens the guarantees for people who were living in Crimea or Donbas without registration, as well as stateless persons or foreign nationals permanently resident in Ukraine.

As reported, it has not been easy to get Ukraine’s legislators to react adequately to the needs of a huge number of people forced to flee Crimea and Donbas.

The above-mentioned law was only signed into force on Nov 20, despite having been adopted by parliament a full month earlier.  The information on the presidential website spoke of amendments that would be made to Law No. 4490a-1 shortly, without providing any detail. The law set out the procedure for registering IDP and regulated issues regarding employment and social payments.

A draft law had originally been adopted on June 19, 2014.  It was not, however, the one that had been discussed with civic groups, but a new document only tabled on the day of voting and basically failed to address any of the very real problems which confront people forced to leave their homes.  That bill was vetoed a month later by Poroshenko, however a new bill was adopted at the absolute final moment by the old parliament, and was then not signed into force by the President Petro Poroshenko for a further month.

On March 4, 2015, a Cabinet of Ministers resolution required people who have moved from areas under occupation to constantly confirm their actual place of residence.  Without the relevant stamp from the Migration Service, the IDP document, entitling them to social payments, material assistance, etc., becomes invalid.   This, human rights activists say, is reinstating the old system of propiska, or registration.  Outrage was expressed by human rights groups working with displaced people, many of whom saw the measure as a way of reducing the number of people entitled to government assistance.