Children learn ’patriotism’ and to shoot Kalashnikovs in occupied Crimea 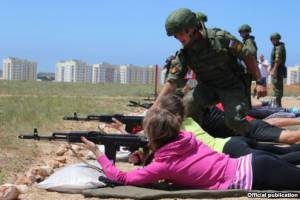 The final stage of the Russian military-sport game ‘Victory’ has taken place for the first time in Russian-occupied Crimea, with teenagers from 14-16 competing in shooting, as well as dismantling and putting together Kalashnikov rifles.  The event is aimed at, among other things, ensuring a “solid basis of patriotic awareness” and an “understanding of Russia’s strength and resilience”.

According to the Black Sea Fleet’s press release reported by Radio Svoboda, the finalists in the competition also demonstrated their physical training, were tested on their knowledge of Russian history and had to give a presentation about their region.  There were 44 teams from different parts of the Russian Federation and, presumably, Crimea, with each made up of 8 boys and 2 girls.

This is the fifth time the ‘military-sport games’ have been held as part of Russia’s state programme on ‘patriotic education’ which has been especially pushed by President Vladimir Putin.

The choice of Sevastopol, 15 months after Russia invaded and annexed Crimea, was doubtless deliberate, and one can assume that the history test reflected the Kremlin version of history.  It is worth noting the comments made by Andrei Zubov, former Professor of History at the prestigious Moscow State Institute of International Relations (MGIMO).  Zubov lost his job for his fierce criticism of Russia’s invasion and later stated that he would fail any student who claimed, as have Russia’s current leaders, that Crimea was “always Russian”.

This is not the only undertaking Russia has planned for occupied Crimea.  A month ago Russia’s Minister of Culture Vladimir Medinsky announced that in 2016 the Russian Military History Society which he heads would be organizing a ‘patriotic camp’ for 5 thousand children in Crimea, entitled “I am a Citizen and Defender of a Great Country”.  At that camp it is planned that young people, aged from 12 to 18, will study the history of Russian statehood and the Russian Armed Forces; military ethics, and will also undergo physical and tactical training, together with training in using firearms and marching in formation, etc.  Medinsky believes that this has a positive impact on kids who want to be “like the military heroes of our Fatherland”.

The camps were first started in Russia in 2014, with their aim being quite openly to prevent young people turning to political protest.  Denis Sadovnikov from the Russian Military History Society was quoted as suggesting that the children should find a ‘positive role’ model in Igor Girkin (nom de guerre Strelkov). The latter has been identified by US officials as working for Russia’s GRU military intelligence service and played an active role both in Russia’s invasion of Crimea and in the military conflict in Donbas.  At the time Sadovnikov was offering him as an example to Russian youth, Girkin was ‘defence minister’ of the so-called ‘Donetsk people’s republic’.

The camps and ‘Victory’ military sport games are all part of the 2011-2015 “Programme for Patriotic Education of Russian Citizens”.  Putin clearly sees this as not going far enough. In April 2015 he reportedly instructed Russia’s Education Ministry to reinstate early ‘patriotic education of young people’.  He said that the work must be on a modern level, interesting, educational and gripping for young people so that they understood what they have to be proud of.

The plan drawn up by Rosmolodezh, the Federal Agency on Youth Affairs, for the period until 2020 is more ambitious – and expensive.  The plan envisages an 8% increase in the number of Russians “proud of their country” and a 10% increase in the number of army recruits.   It writes of a “geopolitical struggle seen in attempts to exacerbate internal development issues, internal challenges and threats to national security from outside Russia”.   1.8 billion roubles are sought from the state budget.

In a Facebook post a month before he was gunned down outside the Kremlin, Boris Nemtsov wrote of how the Russian government’s anti-crisis plan envisaged continuation of the war against Ukraine. “Expenditure is being decreased on medicine, education, culture, that is, virtually everything except military expenditure.”  He explained that military spending had increased by 33% since 2014.  “This type of increase is impossible in peacetime. This is a war budget”.

Russia’s health service and education are facing steep decline and the number of people experiencing real poverty has increased dramatically, but children will be taught to be good patriots and feel pride in their country – and, seemingly, to shoot from Kalashnikov rifles.