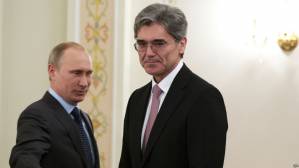 Vladimir Putin and Siemens CEO Joe Kaeser at the Russian President’s residence outside Moscow on March 26.

With a Russian-based subsidiary of Siemens refusing to comment on serious allegations that it is seeking to bypass EU sanctions, a German-initiated inquiry seems called for.  Germany could look to Latvia which is demonstrating its commitment to prosecuting those who breach sanctions.

Delti reported on June 25 that a search had been carried out of two buildings in Riga over alleged violation of the ban on providing tourist agency services for visiting Russian-occupied Crimea.  The two buildings both housed branches of MKVC TOUR, the House of Moscow travel agency which is registered in Latvia.

Criminal proceedings were launched on June 4 against two individuals under Article 84 of Latvia’s Criminal Code (violation of sanctions established by international organizations).

The European Union recently extended the sanctions imposed in 2014 over Russia’s annexation of Crimea.  The restrictions include a ban on export from the EU to Crimea of goods and technology used in the transport, telecommunications and energy sector.

Latvia has responded appropriately to a situation where any travel agency organizing trips to occupied Crimea are also in breach of Ukraine’s law on Temporarily Occupied Territory.  As the Russian NGO Public Control recently warned Russian nationals to its cost, it is illegal to enter Crimea except through existing Ukrainian passport control.  In view of this, the NGO warned, they could face both Ukrainian and international sanctions.

Siemens – a tradition of collaboration

The claim that Siemens Gas Turbine Technologies LLC, a St Petersburg subsidiary of Siemens, is to provide gas turbines for new power stations in Crimea was first made in a Vedomosti report on June 30.  Aside from loose assurances that Siemens will comply with international sanctions, there has been no response to serious allegations which would show a company which Siemens has a majority share in deliberately bypassing restrictions imposed due to Russia’s annexation of Ukrainian territory.

Vedomosti reported that the deal had been reached in Spring with the Siemens turbines officially contracted for a station in Taman (Krasnodar region, Russia) but in fact destined for Crimea.  Siemens Gas Turbines Technologies LLC is described by Bloomberg as a subsidiary of Siemens Aktiengesellschaft which owns 65% of the shares.

Vedomosti’s unnamed sources suggest a conscious fiddle with a new power station in Taman used as a smoke screen.  The turbines are to be purchased by Tekhnopromeksport, a subsidiary of Rostekh which Russia contracted a year ago to build power stations in Simferopol and Sevastopol, with 25 billion roubles of the cost funded by the Russian state.

Crimea is 90% dependent on Ukrainian electricity supplies, so if this report proves true, Siemens’ collaboration with Russia in violating international sanctions would seem clear.

One of the sources told Vedomosti that Siemens would likely refuse to service the turbines once they were in Crimea because of the sanctions.  Another suggests that this is no problem since spare parts can easily be bought at Siemens factories in China and Iran,   and the Siemens service is already officially located in Russia.

Siemens has already demonstrated a will to collaborate with Russia.  Just 8 days after Russia ‘formalized’ its annexation of Crimea, the Wall Street Journal reported that Russian President Vladimir Putin “facing increasing isolation from the U.S. and European nations, received a vote of confidence from another important corner: one of Europe’s biggest companies.  Siemens AG Chief Executive Joe Kaeser met Mr. Putin at his official residence outside Moscow on Wednesday. The men posed for the cameras and talked up Germany and Russia’s special economic relationship”.

That meeting and the clear message that Siemens – and, supposedly, other German firms - were interested in close cooperation with Russia despite its flagrant violation of international law was a propaganda coup for the Kremlin.

Failure by Germany to properly investigate very serious allegations against Siemens would be another victory for Russia.  The Latvian authorities have demonstrated that they will not allow firms registered in Latvia to breach sanctions.  Let’s hope Germany follows.