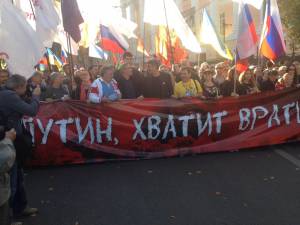 A nationwide survey has found that Russian propaganda about an ‘illegal armed junta’ in February 2014, ‘widespread discrimination of ethnic Russians’, etc. has not convinced the majority of Ukrainians who are certain that the Ukrainian army is fighting Russia and pro-Russian terrorists   The good news ends there since some of the more subtle messages pushed by the same propaganda are effective, trust in all media diminished, and scepticism about the current Ukrainian government high.

The survey found that respondents could be divided into 4 groups depending on how they received news.  72% get news mainly from the Ukrainian media – TV and / or the Internet;  22% - from both Ukrainian and Russian; 0.2% mainly from Russian; and 6% don’t use either Ukrainian or Russian media to find out the news.

Ukrainians proved united in their immunity to the Kremlin’s narrative on the conflict in Donbas and denial of Russian involvement.  Although the numbers were slightly smaller in the east and south of the country, a large majority of Ukrainians are convinced that the Ukrainian army is waging war with Russia and pro-Russian terrorists and that the source of the difficulties which the country is facing is Russian aggression.  A large percentage also viewed Maidan 2014 as a people’s revolution.  There was, however, no geographical divide regarding one question with a similar number everywhere answering that the present government is not capable of carrying out the reforms needed.

The survey was commissioned by Telekritika and carried out by the Kyiv International Institute of Sociology [KIIS] from May 20 to June 2.  People were interviewed in all regions, except Crimea, however KIIS warns that due to the difficulties in areas under Kremlin-backed militant control, the respondents from the so-called ‘Donetsk and Luhansk people’s republics’ cannot be considered a representative selection of the local population.

Marina Shpiker from KIIS explained that in drawing up the survey they assumed two levels of propaganda.  The first covers the narrative about a Kyiv ‘junta’, rabid nationalists seizing power, etc.  The second is more subtle and aimed at undermining Ukraine’s resistance, with the messages claiming that the Ukrainian army is not capable of defending the country, that the government can’t do anything and that peace is needed at any cost.  She pointed to several positive assertions which she believes can act as a uniting force in the country, namely the determination to achieve peace and believe that this period of crisis will pass and Ukraine will become a thriving nation. 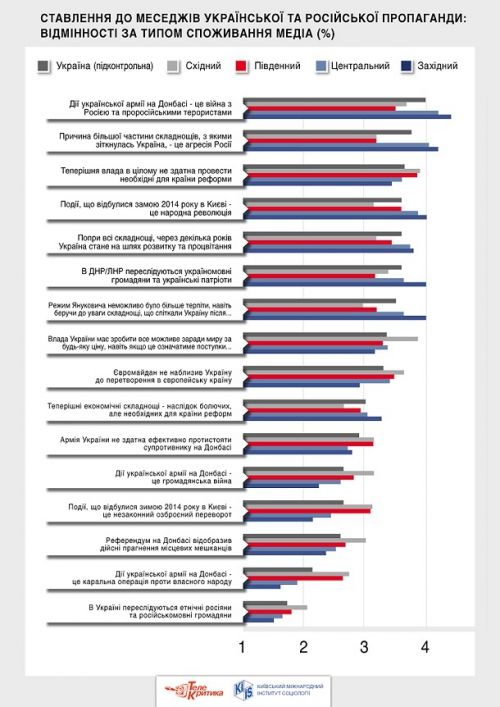 Translation of the above graph:  Attitude to messages pushed by Ukrainian and Russian propaganda

Despite all difficulties, in a few years Ukraine will be on the path to development and to flourishing

In DPR/LPR Ukrainian-speaking citizens and Ukrainian patriots are persecuted

The Yanukovych regime could not be endured any longer, even taking into consideration the difficulties that Ukraine has faced since

The Ukrainian government should do anything possible for the sake of peace at any price, even if that entails concessions

Ethnic Russians and Russian-speaking citizens are persecuted in Ukraine