Moscow shouts ‘abduction’ yet holds Ukrainian hostages incommunicadoRussia holds 72-year-old Ukrainian hostage on absurd spying chargesRussian mother of 7 stands by her warning about Russian soldiers in UkraineRussian Mother of 7 accused of ‘treason’ released from custodyRussians call to release mother of 7 accused of revealing ’state secrets’Russian woman charged with ‘treason’ for reporting soldiers sent to UkraineRussian Newspeak: “Killed at exercises on the border with Ukraine”Russian soldiers’ deaths in Ukraine: A web of lies and fake social network pagesMore Russians aware that their sons are being sent to fight and die in UkrainePersecution of elderly activist exposing Russian soldiers’ deaths in Ukraine continuesRussian rights activist investigating soldiers’ deaths in Ukraine arrestedRussia continues lying about solders’ deaths in UkraineFirst reports on Pro-Kremlin TV of Russian soldiers killed in UkraineEntire Pskov paratrooper regiment killed in Ukraine?More Russian conscripts forced to fight in UkraineAttacked for asking why Russian paratroopers died fighting in UkraineThe Russian Invasion and Deaths Putin didn’t mentionRussian NGO has list of 400 killed or wounded Russian soldiersIf Russia is not at war, then who is in those freshly-dug graves?Macabre Convoy: Cargo 200 from Ukraine to Russia
• Topics / Implementation of European Law
• Topics / The right to liberty and security
• Topics / News from the CIS countries 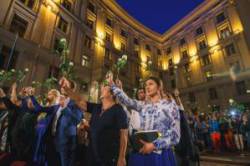 White roses at a concert in support of all Russia’s Ukrainian hostages (Photo: Yevhen Nikiforov)

Two Ukrainian nationals, one elderly and in poor health, have been held in Russian detention now for almost a year on mystery spying charges.  The degree of secrecy and refusal to let 73-year-old Yury Soloshenko see the lawyers of his choice and obvious pressure placed on 30-year-old Valentin Vyhivsky arouse serious concern that the men’s nationality is the main ‘incriminating’ factor.  At this rate, the trials may begin with nobody knowing what the men are supposed to have done.

Both have been held in the Lefortovo Prison in Moscow since last year and had for most of that time been prevented from seeing the Ukrainian consul.  Svetova recently reported, however, that following the capture in Ukraine of two Russian spetsnaz military officers who asked to see the Russian consul, Moscow allowed a visit from Ukraine’s consul.

There is nothing else positive to add.  On July 2, a Moscow court extended Soloshenko’s detention until Aug 5.  Although by then he will have been held in custody for a year, effectively nothing is known about the charges against him. The investigators illegally stopped Soloshenko from seeing the lawyers taken on to defend him, and all information about the case is classified as secret.

It is not difficult to understand why the investigators refused one of the lawyers access to his client.  Back in March this year Ivan Pavlov played a major role in getting the charges of ‘state treason’ dropped against Svetlana Davydova.  The charge of treason for trying to warn Ukraine that Russian soldiers were being sent to eastern Ukraine was absurd, and the detention of a mother of 7, including a 2-month-old daughter whom she was still breast-feeding, monstrous and in breach of regulations. Yet the ‘lawyer’ provided by the investigators (Andrei Stebenev) sought only to get Davydova to ‘confess’ and made no effort to stop the court from remanding Davydova in custody.

For that reason it is of major concern that Soloshenko, probably under duress, has now rejected the legal service of Pavlov and his team.  He is staying with the lawyer – Sergei Kisel - offered by the investigators, who gives every impression that he is serving the prosecution, not his official client.

Soloshenko is the retired director of the long-bankrupt Poltava-based Znamya factory which once specialized in high-frequency electro vacuum lamps used in anti-aircraft warfare.  The factory had always depended for its survival on orders from Russia, meaning that there was nothing secret between the two countries, with it all a single system.  Soloshenko was arrested in August 2014 when he arrived in Moscow for a business meeting connected with buying and selling equipment. His son believes that he was set up by somebody he trusted and had worked with.  This may explain how he came to be in Moscow, but casts no light over the  charge of ‘spying’ which the investigators are keeping top secret.

In an article entitled “Torture by investigation”, human rights activist Zoya Svetova spoke of the refusal to allow Soloshenko to see his chosen lawyers and other overt infringements.  She wrote that she had visited many people held in detention, but had never seen such flagrant violation of Russia’s Constitution as in the case of Yury Soloshenko.

The case of Valentin Vihivsky is also in violation of Russian and international law, though even less is known about him.  Svetova, who was contacted by his father, reports that the 30-year-old set off for Simferopol on Sept. 17, 2014 and was supposed to return two days later.  It was only in the middle of October that his father finally learned that he had been taken to Moscow and placed in the Lefortovo Prison.

Ukraine’s Foreign Ministry was told only that he is charged under Article 183 of the Russian criminal code (illegally receiving and disclosing information constituting a commercial, tax or banking secret). A few months later, Svetova reports, the State-appointed lawyer Vladimir Goryachev informed Vyhivsky’s family that the charges could be changed to espionage (Article 276).

Valentin’s father learned that a whole group of people had been detained at the railway station in Simferopol on Sept 18.  Vyhivsky seems to have been separated from the others and taken away for ‘questioning’ with physical force perhaps used.

There is frighteningly little to say beyond that.  The Ukrainian national was taken, undoubtedly against his will, to Russia where he has been held ever since.  As with Soloshenko, the only lawyer seems to be a person provided by the investigators and probably serving them.   Certainly the account given by Svetova who, as member of a monitoring group, has the right to visit detainees, is anything but promising.  She says that the young man didn’t want to talk about himself at all, and even refused to say which article of the criminal code he’s charged under.

Svetova believes that he may have been persuaded to ‘confess’ so as to get a lighter sentence.

Which could mean that nobody even finds out if Russia ever had any charges against him.