Decentralization of the government: reform behind closed doors 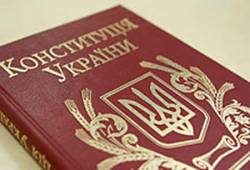 On June 24 the Venice Commission of the Council of Europe published its conclusions on the bill on amendments to the Constitution of Ukraine in the section regarding decentralization drafted by President Petro Poroshenko. The conclusions of the Venice Commission were for the most part positive, though they also pointed out a number of problematic issues of constitutional reform. On June 26 a session of the Constitutional Commission was held during which decisions were made to make certain corrections to the bill and transfer it to the president, who promised to submit them to the Verkhovna Rada.

What changes to the Constitution were submitted to the deputies?

How legitimate can such changes in the Constitution be?

The devil lies in details

The need for decentralization of power in Ukraine is incontrovertible. In addition to that, a consensus on how to implement decentralization has been formed in the non-government expert circles. The document submitted by the Constitutional Commission to the Venice Commission generally corresponded to this vision, though it contained a number of clauses that posed a threat to the implementation of the positive intentions of its authors. The conclusion of the Venice Commission adequately reflected the contradictory nature of this document, pointing out its advantages and shortcomings.

On the one hand, the transfer of the majority of executive powers from local state administrations built into the state vertical to executive committees that will be by local councils was indisputably approved.

The expansion of financial autonomy of bodies of local self-government (BLSG) by granting territorial communities the right to set local taxes and fees was an important supplement to this innovation. This way the BLSG directly elected by citizens will not only gain full authority in resolving local problems, but will also receive financial and other resources to fulfil their authority in practice.

The idea that representatives of the state bodies of power in the regions (so-called prefects) responsible for monitoring the legality of activities of BLSG was also perceived well. However, the proposed model of appointment and dismissal of the prefects was not well thought out. First of all, the bill proposed the system of appointment of prefects based on the current model of appointment of heads of the Local State Administrations – meaning by the president upon submission to the Cabinet of Ministers.

Furthermore, the document granted the head of state exclusive right to dismiss prefects. This obviously not only posed a threat to renewed rivalry between the president and the government for control over the activity of prefects, but also would have given the president excessive levers of influence over them.

The inclusion of rights of the president to prematurely suspend the authorities of local councils in the event that they posed a threat to territorial integrity or national security appeared to be no less threatening. On the one hand, such authority can be justified by the separatist-minded activities of some local councils during the annexation of Crimea and the unrest in the eastern and southern regions of Ukraine in 2014.

On the other hand, the proposed normative resolution of the situation would have created a threat of unjustified establishment of direct presidential rule in the regions. First of all, the head of state could have independently determined whether the local council poses a threat to the state without referring to the Constitutional Court. Secondly, in the event that the functioning of the local council is suspended the president could have controlled local bodies of power through his representative during one-year term, which would obviously have been a violation of citizens’ rights to self-government.

Noteworthy is that these changes to the bill, just as any previous working versions, were not publicly presented. This is where the main problem of reform of the system of relations between the central and regional administrations appeared – namely, the absence of its openness to society. Even experts in this sphere had far from any opportunities to gain access to documents that were drafted by representatives of the commission. Obviously, the average citizen could only guess what the true content of the proposed changes was.

Moreover, the process of drafting the bill of changes to the Constitution in and of itself was excessively closed. On the one hand, many leading experts in decentralization were indeed included in the commission, although not all of them. On the other hand, stakeholders of the decentralization reform – namely, the heads of local, town and village councils and officials of the local state administration – were practically not engaged in the process of discussion. Furthermore, the process did not include feedback from all interested actors which should be an integral element of any reform, all the more such an important one as decentralization.

Accordingly, there are obvious concerns that the process of making changes to the Constitution will lack legitimacy among both key stakeholders and society overall. Such a flaw could have not only a symbolic, but also practical significance. In particular, the success of decentralization will critically depend on the trust of those who will put it into practice and their understanding of its particular features. For this reason, even legal finalization of making changes to the Constitution in the sphere of decentralization does not guarantee the success of their implementation seeing as without active cooperation of the government with stakeholders it could face active resistance during the implementation of adopted clauses in practice.

As such, the drafting of the bill on changes to the Constitution in the sphere of decentralization of the government was characterized by the closed and non-transparent nature of the work of the Constitutional Commission. Accordingly, the further process of discussion and possible approval of the bill in parliament must be accompanied by more open discussions to which at least the main interested actors and expert representatives of civil society must be engaged. In addition to that, the government should launch a major campaign of informing the public about the essence, potential advantages and possible threats of decentralization in order to prepare society for the implementation of this reform.