Disturbing allegations over arrests of far-right suspects in Oles Buzyna killingWho wants to turn Kyiv into another Donetsk?In Memory of Boris Nemtsov – Minute of NON-SilenceThe Anti-Semitic Coding in Putin’s Telegram to Boris Nemtsov’s MotherBoris Nemtsov: Yes, I’m afraid that Putin will kill meTrial begins of two C14 far-right activists accused of killing controversial journalist Oles BuzynaNew surreal confessions from Ukrainian ‘SBU agent’ seized by Russia backed Donbas militantsThe attempt of arson of the flat of Oles Buzina (Kyiv)Decision on the claim against the newspaper “Kievskie vedomosti”, Oles Buzina and Marina Turovskaya “on the protection of honor, dignity and business reputation of T. Shevchenko” came into force after the consideration in the Kyiv appeal courtThe attempt of arson of the flat of Oles Buzina (Kyiv)
• Topics / The right to a fair trial 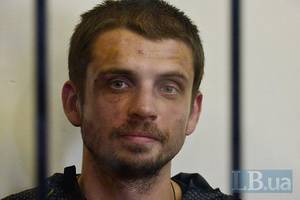 The Kyiv Court of Appeal has upheld the detention  until August 14 of Andriy Medvedko, a far-right activist accused of killing journalist and publicist Oles Buzyna.  The court hearing came days after the prosecutor’s office successfully challenged a ruling granting bail to the second suspect – Denis Polishchuk and the latter was once again taken into custody.

Both the victim and the suspects in this case arouse strong emotions, and the court hearings have been attended by certain MPs and others asserting that the men are innocent.  Although the majority appear to be people who support the men’s political views, this does not seem to be the case with all.  There has also been strong criticism of the Interior Minister Arsen Avakov who announced on June 18 that the crime had been solved and the culprits found before a court had even remanded the two suspects in custody.

Oles Buzyna was widely viewed as anti-Ukrainian and often interviewed by the Russian media.  He was gunned down in the centre of Kyiv on April 17 about 12 hours after the shooting dead of Oleg Kalashnikov, a politician known to have organized the ‘titushki’ or paid thugs used under the Presidency of Viktor Yanukovych, including against Euromaidan activists.  A lot of commentators initially assumed that the two killings were linked, however the investigators are only charging the two suspects with Buzyna’s murder.  Artem Shevchenko, Police Communications Director, argues that the two killings were separate.

There were also calls from international media organizations etc. to ensure an efficient and transparent investigation into Buzyna’s killing.  This has provoked claims from some of those effectively supporting the young men to assert that they have been framed.

It was presumably for this reason that Shevchenko took the extremely unusual step of writing an article in the media. He says that he persuaded the investigators to share evidence which cannot harm the case, but should convince people that the police have grounds for their suspicions.

He writes of several witnesses, saying that one, a taxi driver waiting for a customer, was the closest from the crime  Judging by the testimony cited, the man had seen one of the suspects giving an interview, and is asked if this was the person.  Whether that was the only identification carried out is not clear. The taxi driver said that he was 60-70% sure of one of the men (the one who fired the shots), and only saw the other for a few seconds.

Several people saw the car, which was also recorded by the video register on another car. The investigators assert that Buzyna’s killers were watching him from that car for a week, and early that morning arrived in the courtyard and waited for him, then left in it after the killing.

The article is detailed, with other evidence mentioned, including some regarding phone calls which Shevchenko says cannot be revealed in full, but which allegedly drew the investigators’ attention to Medvedko.

During the court hearing on Monday Serhiy Voichenko, the lawyer representing both men, asserted that the DNA forensic test carried out in the case could not prove the suspects’ guilt in the case, and effectively suggested that it had been falsified.  He argued that the DNA test in fact proved Polishchuk’s innocence since not one of the medical masks had his DNA. “They claim that the tall person fired the shots, but on the jacket where they find the gunpowder, they found Polishchuk’s DNA.  And they find it on the outside although it would be more logical for it to be on the inside. This yet again indicates total falsification”.

The lawyer(s) also presented the media with two alleged witnesses, both of whom say that the men in the Ford believed to have been the killers’ car were not similar to Medvedko and Polishchuk.  A kiosk worker  – Angela Kukla – said that she had seen two men in the car in the morning, and that later they had bought coffee from her.  One, she says, looked around 40, the other around 35.  She explains that the investigators showed her an identikit picture and she recognized one of the men, not either of the suspects.  Olha Mykolaivna, the owner of the kiosk said that she saw the Ford and the men getting out of it who had spoken to each other in prison jargon.  She asserts that they were not similar to Medvedko and Polishchuk.

26-year-old Andriy Medvedko is a member of the extreme nationalist group C14, which positioned itself as the youth wing of VO Svoboda, but was much more extreme in its views. He stood for election to the Kyiv City Council (as a VO Svoboda single mandate constituency candidate) but was not successful.  25-year-old Denis Polishchuk is a member of UNA-UNSO, a far-right nationalist organization which during Euromaidan merged with Right Sector, but has apparently returned as a separate organization.  Both men were active participants in Euromaidan.  Medvedko has more recently fought in Donbas as part of the Interior Ministry’s Kyiv-2 volunteer battalion, while Polishchuk has served as commander of a unit of the 54th separate reconnaissance platoon.