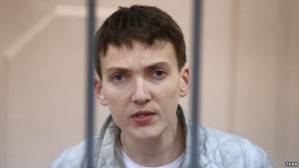 Investigators in Russia have increased the seriousness of charges against captive Ukrainian pilot Nadia Savchenko, accusing her of direct participation in the killing of two Russian reporters who died last year while covering the conflict in Ukraine.

A spokesman for the Russian Investigative Committee, Vladimir Markin, announced the new charges on July 7, along with charges of attempted murder and illegally entering Russian territory.

Savchenko has been in Russian custody since July 2014, when she alleges she was captured by pro-Russian gunmen in eastern Ukraine and smuggled across the border into Russia.

The charges against Savchenko could carry a life sentence.

She was previously accused by Russian authorities of complicity in the deaths of reporters Igor Kornelyuk and Anton Voloshin in Luhansk.

Savchenko has consistently denied the charges, saying Russia has no right to detain or try her.

Markin said the Investigative Committee had completed its inquiry and sent the case to the prosecutor’s office to pave the way for a trial.

Markin’s statement came one day after Russian authorities rejected Savchenko’s request to be tried by a jury, potentially placing her fate in the hands of a so-called troika -- a judge and two public representatives.

Savchenko’s lawyer, Nikolai Polozov, said on July 6 that he was informed via telephone that "all the petitions have been denied and the case was transferred to the prosecutor’s office."

Savchenko conducted a hunger strike that lasted more than 80 days to protest her incarceration in Russia, sparking fears that she did irreversible damage to her health.