Back in the USSR: Russia places human rights NGOs on ‘Patriotic Stop List’ 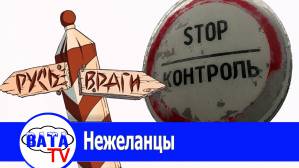 Left points to Rus, right to "enemies" .  The program's satirical title is 'the undesirables'

The vital Crimean Human Rights Field Mission has been placed on a so-called “patriotic stop list” of foreign NGOs likely to be deemed ‘undesirable’ and effectively outlawed in Russia and Russian-occupied Crimea.

Russia’s upper house of parliament, the Federation Council, has drawn up a list of 12 organizations for a ‘patriotic stop list’ of foreign NGOs deemed ‘undesirable’ in Russia.  It includes the Crimean Human Rights Field Mission, Freedom House, the Open Society Foundation and a number of other well-known NGOs.   Before the Council’s session on Wednesday, the head of the FC committee on international affairs, Kostantin Kosachev described the organizations as « foreign or international nongovernmental organizations known for their anti-Russian bias » and said that they would be considering whether they should be declared undesirable organizations.  “We want to defend Russian civic society from outside manipulation”, he stated.

This ‘patriotic stop-list’, he asserted, would be of a “preventive nature” and an open document which could change, presumably if the said NGOs repent of their “anti-Russian” ways.

Valentina Matveyenko, Head of the Federation Council and close associate of President Vladimir Putin was considerably more careful than Kosachev in what she said about the list.  She claimed it to be based on appeals from the regions where the authorities “are concerned that foreign organizations that do not even have branches in Russia are working on their territory.”  The stop list, she asserts, will enable the work of these NGOs to become more “transparent and understandable”.

In fact, however, if they are declared ‘undesirable’ as per the legislation passed in May this year, their work will become totally impossible, and any Russians working for them will be in breach of Russian law (more details here).

The inclusion in this effective blacklist of the Crimean Human Rights Field Mission is especially disastrous.  Russia and the occupation authorities in Crimea have consistently refused to allow western structures and NGOs to visit Crimea and observe the human situation there.  The Crimean Field Mission has been a vital source of information about very grave rights violations which is, one assumes, why it has been added to this list.

It is almost exactly 40 years since the signing of the Helsinki Accords in which the Soviet Union, which Russia calls itself successor to, agreed not only to respect the territorial integrity of states, but to also respect human rights and fundamental freedoms.  The move back in 1975 was significant even though nobody seriously expected the USSR to honour its word.  40 years on, Russia is scarcely pretending.