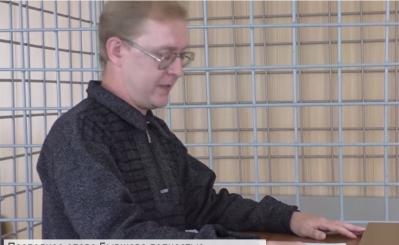 Alexander Byvshev, the Russian poet dismissed from his teaching job and on trial for a poem against Russia’s annexation of Crimea says that he would repeat every word despite all of the persecution and hate campaign against him this last year.  WIKIPEDIA, in contrast, has removed its entry on the poet in Russian and muffles this censorship on its English page

The court verdict in his trial is due on July 13, with the prosecutor demanding 6 months community work and a ban from teaching.  The latter under the present regime in Russia is probably unnecessary since Byvshev lost his job immediately, and was recently to Russia’s List of Terrorists and Extremists.

As reported, Russian Wikipedia followed suit by removing their entry on the poet.  This was certainly noticed by the English-language Wikipedia,  Since a text reporting Wikipedia’s censorship is even cited as a source on their page about the poet.  Unfortunately, they chose not to mention the censorship, and the Russian page has not been reinstated.

The criminal charges against Byvshev are over the poem – “To Ukrainian patriots” posted on Byvshev’s social network VKontakte page soon after Russia’s invasion and annexation of Crimea.  The poem, which is widely blocked in Russia, expresses vehement opposition to Russia’s invasion and suggests Ukrainians should ensure that not one inch of Crimea is handed “to Putin’s chekists” (see: Russian teacher on trial for poem against annexation of Crimea)

At the court hearing on July 7, Byvshev read out his final statement.  He began by quoting George Orwell:  “In a time of universal deceit - telling the truth is a revolutionary act”.

He says that he is often asked – more often with glee, or even hatred what he achieved “with his truth”.  Yes, it has been difficult, he admits and goes on to describe the hate campaign against him, the threats he has received, his life as an outcast in his provincial town, being placed on the ‘list of terrorists and extremists’. “All of that is the case.  Yet nonetheless I answer without hesitating for a second: “I don’t regret anything and am ready to repeat each word from the poem that I’m being tried for.  I acted according to my conscience, as my convictions dictated. And for your convictions you have to go to the bitter end.”

For 20 years, he continues, he taught his students never to lie.  What would that say about him if, after calling on others to tell the truth, he himself began prevaricating and repenting in cowardly fashion, renouncing what he had written or said and changing his position to suit the political climate. “I think that would be dishonest and low on my part. Life has decided to test me for the strength and firmness of my views. I am taking an exam today in maturity, in the true calling of a human being”.

He calls the trial politically motivated and believes its aim totally clear, namely to demonstratively punish a person who dared speak his mind and thus challenged the majority who have become accustomed to living as they’re told, not as their conscience dictates.

“After all my ‘offence’ consists solely of having called things by their proper names: that it’s bad to take what belongs to others; that it’s unacceptable and immoral to violate international agreements. That people holding weapons and heading to another country to kill its citizens are war criminals, bandits and occupiers and that Ukraine, like any country, has every right to defend its territorial integrity and sovereignty through all available means, including armed resistance. Where in that is there extremism, incitement to enmity between peoples, propaganda of one nation’s supremacy over another?”

Byvshev gives annihilating criticism of the so-called experts and the level of the accusations he is facing (examples here).  Important to note that, in trying to justify his demand for Byvshev to be prevented from teaching, the prosecutor claimed that some students “remembered him” criticizing the country’s leaders in class.  This would not necessarily be viewed as unacceptable in many democratic countries.  In Russia, Byvshev notes, any such behaviour would have received immediate reaction.  Instead, there had never been any complaints from anybody about his teaching until the poem about Russia’s invasion of Crimea.

Until he saw no choice but to call things by their real names.  It is not only Alexander Byvshev who has been tested by this ‘trial’ with its worrying Soviet echoes.  The judge’s exam will be passed or failed on July 13, and we should not pre-judge.  Those who found ‘extremism’ and ‘incitement’ in a poem against Russia’s invasion of Crimea and those involved in the hate campaign have already been tested, together, unfortunately, with Wikipedia.  They failed.