Trial begins of Sentsov and Kolchenko as OSCE demands their release 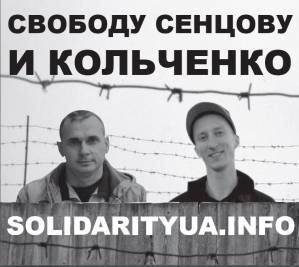 The preliminary hearing is due on July 9 in the trial of Ukrainian film director Oleg Sentsov and civic activist Oleksandr Kolchenko whom Russia is holding illegally and accusing of ‘terrorism’.  The two Crimeans were specifically named, together with Nadiya Savchenko and  “all other illegally detained Ukrainian citizens” in the Organization of Security and Cooperation in Europe’s resolution.

The hearing on Thursday by a military court in Rostov will be behind closed doors with only the prosecution and defence admitted. The fact that even the Ukrainian consul will not be allowed to attend has been condemned by Ukraine’s Foreign Ministry as the latest breach in the Vienna Convention on Consular Relations.  They have been refused permission to see the two Ukrainians for almost 14 months now.  As reported, Russia has illegally claimed that the two men are Russian nationals more or less ‘by default’ because Russia annexed their native Crimea (see: Imprisoned Crimean Activist takes Russia to Strasbourg over forced citizenship )

Sentsov and Kolchenko were taken to Rostov at the beginning of July. Although the conditions in the SIZO [remand prison] are reported to be reasonable, the distance from Moscow makes it much harder for people to show their moral support for the two, and of course heavily increasing lawyer fees.

This preliminary hearing is taking place at a time when Sentsov’s two lawyers are on leave (as they had warned long before the hearing was scheduled, so he will be represented by another member of their team.  Svetlana Sidorkina, Kolchenko;s lawyer will be present.  The trial itself, she says will be heard by a panel of three judges.  She notes also that military courts (required since the men are charged with ‘terrorism’) tend to keep to schedule more than ordinary courts, meaning that the trial could end in 2 – 3 months.

Sentsov and Kolchenko were arrested in May 2014, together with two other active opponents of Russia’s annexation of Crimea – Gennady Afanasyev and Oleksy Chirniy.  All four men were held for up to 3 weeks without access to proper lawyers or their families and then taken by force to Moscow.  It was only on May 30 that the FSB came up with charges against the men, accusing them of a ‘Right Sector’ terrorist plot

Sentsov and Kolchenko both allege that they were tortured and there is every reason to believe the same of the other two. Afanasyev and Chirniy, however, did ‘confess’ and have since ‘cooperated’ with the investigators and received the minimum sentences under the relevant article of the criminal code (7 years).

They will both be giving testimony at the trial.

There is no other evidence against Sentsov at all, and the only real charge against Kolchenko is that he threw a Molotov cocktail late at night at the deserted office of the Russian Unity party.  He admits to this but quite rightly denies that this had anything to do with ‘terrorism’.

Despite the lack of any actual terrorist acts, or hard evidence that such were planned, Oleg Sentsov and Oleksandr Kolchenko are facing likely 17-20 year sentences.

Both men have been recognized as political prisoners by the Memorial Society and all international film festivals have joined famous film directors in calling for an end to this monstrous travesty of justice.