Kremlin’s anti-Semitic proxies in Donbas turn on each other 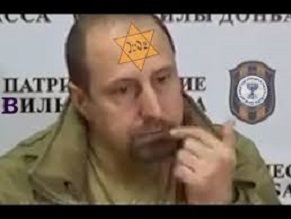 It was bad enough for Russian President Vladimir Putin’s narrative about ‘anti-Semitic hordes’ seizing power in Kyiv when the Kremlin’s proxies in Donbas dismissed Ukraine’s leaders as “pathetic Jews”.  Now foul anti-Semitic attacks are being used as part of an internal struggle for power between various militant leaders.

Viacheslav Likhachev, researcher on anti-Semitism and xenophobia, reports that the fighting for position within the part of the Donetsk oblast under the control of Kremlin-backed militants appears to be intensifying  He stresses that the lack of reliable information makes it difficult to be certain what is going on, but that some of the information coming out suggests that the battle may be heating up due to the state of health of the leader of the so-called ‘Donetsk people’s republic’ [‘DPR’], Alexander Zakharchenko.  As well as political power, he says, the infighting between certain militant leaders is probably about control over smuggling channels.

What is more interesting, however, are the methods used, and what kind of supposedly compromising information or ‘dirt’ is being flung around.

One of the militant leaders most under attack is Alexander Khodakovsky, a former commander of the Ukrainian Security Service [SBU] Alpha special force unit and then commander of the Kremlin-funded and largely manned Vostok Brigade (initially battalion).  He became ‘security minister in the so-called ‘republic’ last summer and since autumn has been calling himself secretary of a self-styled ‘security council’.

He first came in for criticism back in late August when the Vostok Battalion, with a large contingent of supposed volunteers from Chechnya and Ossetia in Russia, suffered heavy losses when trying to seize Donetsk Airport.  Then, however, he was merely called a “traitor”.  Later they added the detail that supposedly ‘explains it all’, that Khodakovsky is Jewish.

Likhachev notes that there has been a noticeable change in the level of such anti-Semitic attacks.  If initially they were anonymous comments like “well what would you expect from a Jew [an offensive word used]?”, the anti-Semitism developed into a major component.  The blurb about a film against “Jew Khodakovsky” posted on YouTube states, for example, that: “Jew Khodakovsky did not betray the insurgents. Being a Jew and citizen of Israel, he simply acted in accordance with the Torah”.  People’s negative comments about Khodakovsky are accompanied by his photo with a star of David or the emblem of the Israeli intelligence service.  He is alleged to be a specially trained Mossad agent who has been planted in the ‘DPR’ leadership to carry out sabotage, plan doomed operations, etc.

There is, unfortunately, nothing at all exceptional about this attack.  As LIkhachev puts it  “anti-Semitism has long become an important component of the official ideology and propaganda of the puppet regimes declared on the territory of the Donetsk and Luhansk oblasts, occupied by Russia. It is used, for example, to discredit the President and leaders of the country”,

The most outrageous example was in early February when Zakharchenko and the leader of the so-called ‘Luhansk people’s republic’, Igor Plotnytsky, publically referred to Ukraine’s leaders as “pathetic Jews”.

Plotnytsky recently demonstrated his level of linguistic knowledge as well as his primitive anti-Semitism by claiming that Euromaidan referred to ‘Jewish Maidan’, not European Maidan  (in Russian the word Jewish has the same first letters as European).

Back in April last year, after militants seized control in Sloviansk, they removed Ukrainian channels, replacing them with Russian propaganda channels as well as one with an overtly anti-Semitic bent.  They were, they claimed “inflicting a powerful information conceptual blow to the biblical matrix … to Zionist zombie broadcasting”.   One of the militant groups had shortly before that come up with anti-Semitic attacks against Boris Filatov, aide to the then governor of Dnipropetrovsk Igor Kolomoisky (who was also attacked in similar mode).

Likhachev notes that Plotnytsky’s own anti-Semitism did not stop him being called a Jew (with the offensive term used).

The level is pitiful, but those using anti-Semitic attacks in their power struggle are assuming that this will find a receptive audience, and in the Kremlin-backed ‘republics’, the assumption is probably correct.