Russian soldiers face prison for refusing to fight in Ukraine 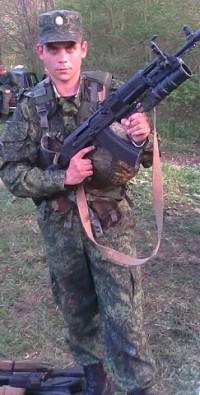 Several dozen Russian contract soldiers could face up to 10 year prison sentences for having left a military unit in the Rostov oblast, fearing that they would be sent to fight in Ukraine.  Soldiers allege that were offered up to 8 thousand roubles a day for ‘volunteering’ to go to Ukraine, and effectively held there until they agreed.

Gazeta.ru has spoken with soldiers facing trial for going absent without leave or deserting, their mothers, as well as a lawyer representing 5 men.  On a video which the newspaper was shown, a military official rubbishes all claims that men are being sent to Ukraine.  The journalists’ attempts to speak directly to the man on the video or representatives of the Russian Defence Ministry were all unsuccessful.

All the soldiers are from the Maikop reconnaissance brigade and on contract service. 23-year-old Anatoly Kudrin has already received a 6 month term of imprisonment for going absent without leave, and two others are facing similar charges.  Their lawyers say that the young men left the Kadamovsky unit in the Rostov oblast (which borders Donbas) as they believed they would be sent to Ukraine.

The men are now facing charges under Article 337 of the criminal code (going absent without leave) which carries a sentence of up to 5 years imprisonment and Article 338 (desertion) – up to 10 years.

All the men complain of appalling conditions, but are adamant that they left because they were under heavy pressure to go to Ukraine and were not prepared to take part in the fighting there – for any amount of money.

27-year-old Pavel Tynchenko, who had previously served for 7 years in the Northern Fleet, is in custody, charged with going absent without leave.   His mother explains after he had been sent on training in conditions so bad that he tried to resign.  This was ignored and he and several others were simply put on trucks and taken to the Rostov oblast where he was officially on military training from Oct 15 to Nov 14.

Gazeta.ru quotes the statement Tynchenko issued to the judge of the Maikop military court in which he informs the court that the ruling “has not included my testimony regarding “disobeying an order”.  I did not carry out a criminal order since I did not wish to go against the oath which I took and did not want to take part in military action on Ukrainian territory. I would ask that this is added to the court’s ruling”. 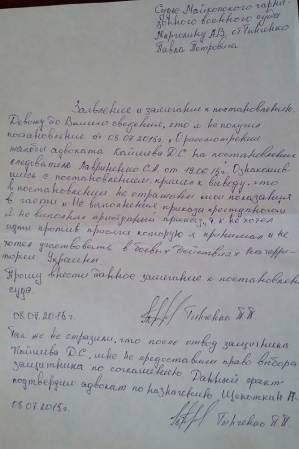 Tatyana Chernetskaya, the lawyer representing 5 contract soldiers says that according to her information dozens of criminal cases have been initiated.  This is borne out by the Maikop court’s statistics.  62 soldiers have been convicted of going absent without leave since the beginning of 2015, against 35 for the entire period from 2010 through 2014.

Chernetskaya reports that the circumstances were the same for all of the several dozen soldiers facing charges of desertion or going AWOL.  They all left the Rostov unit between the end of September, 2014 and the middle of November.  They complained both of the inhuman conditions and of the pressure on them to serve as ‘volunteers’ in the so-called ‘Donetsk and Luhansk people’s republics’.

The conditions certainly appear to have been intolerable with men forced to sleep on blankets on the ground (in October and early November), and with virtually no water available, even to drink.

It is not only Tynchenko, however, who stresses that fear of being sent to Ukraine was at least as strong a reason.

The men recount how they were pestered by recruiters in camouflage gear without insignia who tried to get them to fight in Donbas for money, with 8 thousand per day offered.  All agree that these recruiters were not from their unit, so were clearly there with permission from the military command.

None of them was enticed by the 8 thousand per day offered, Chernetskaya explains, and they made their way back to their unit in Maikop.  There they tried to hand in formal resignations but these were not even considered, and they are now facing serious charges.

They are, however, alive, unlike many other Russian soldiers sent to Ukraine to fight.  Gazeta.ru explains the considerable efforts they took to speak with Russian official sources.  They confronted the same difficulties reported by journalists trying to find out about the two Russian spetsnaz officers captured in Ukraine whom Russia is trying to claim were not active military servicemen.   All suggestions by the Kremlin and Defence Ministry that the two were ‘volunteers’ have been totally rejected by the men themselves.

Moscow has also tried to deny the deaths of Pskov paratroopers in Ukraine, as well as other soldiers.  Human rights activists and journalists like Lev Schlosberg and Ludmila Bogatenkova have faced attacks and hate campaigns, or actual criminal prosecution.

President Vladimir Putin has also come up with a new method.  In his decree from May 28 he classified information about Russian military losses during “special operations in peacetime”, thus potentially enabling prosecution and imprisonment for divulging details about the deaths of Russian soldiers in eastern Ukraine.

The numbers of soldiers killed is becoming impossible to hide, and there are more and more reports from reputable journalists and human rights groups.  Soldiers have now also understood how Russia will abandon them to their fate in order to maintain a lie which no longer has power to convince anybody.