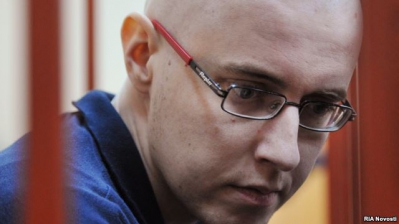 A jury in Moscow has found Ilya Goryachev guilty of ordering the killing of anti-fascist lawyer Stanislav Markelov and four other victims of the neo-Nazi organization BORN [Militant Organization of Russian Nationalists].  The jury held unanimously that Goryachev had also created BORN, termed both an extremist and an armed organization and that he was guilty of illegal circulation of weapons.

Goryachev is also the leader of the far-right organization (originally a journal) Russian Image [Russky Obraz] and had ties to people close to the Kremlin.  He denies all charges and at one of the first hearings in June asserted that his prosecution was the result of a struggle among the political elite, involving Vladislav Surkov.  The latter is now officially an aide to President Vladimir Putin, but was the first deputy head of the President’s Administration during the period that Goryachev was most politically active.  Goryachev had been in hiding and in 2013 was extradited from Serbia to face trial.

BORN members are already serving long sentences for a number of high-profile hate killings which also included Judge Edward Chuvashov  and Novaya Gazeta journalist Anastasia Baburova who was killed on Jan 19, 2009, together with Markelov.  Goryachev was not charged over Baburova’s murder as only Markelov had been deliberately targeted.  He was, however, found guilty of ordering the murders of antifascists Ilya Dzhaparidze and Fyodor Filatov; Salokhiddan Azizov and student Rasul Khalilov.

It was not only because of the high-profile victims that the trial was followed closely.  BORN leader Nikolai Tikhonov and his partner Yevgenia Khasis have insisted on the leading role played by Goryachev and on his links to people in Russian President Vladimir Putin’s administration.  They first spoke of this late last year during the trial of three members of the organization, and repeated their allegations during the trial which has just ended.

Tikhonov is serving life for the murders of Markelov and Baburov, Khasis – 18 years.  It should be said that Goryachev testified against them back in 2011, however the evidence against Goryachev appears to be based on more than just their testimony.

In court, Tikhonov asserted that Goryachev had been “the organizer, leader and ideologue behind BORN”.  They had met at university and in 2003 began publishing the journal Russian Image together.

Although the defence made much of the fact that Russian Image was a legal organization, Novaya Gazeta points out that they received a formal warning from Russia’s Roskomnadzor for citing the organization’s political manifesto which were described as propagating racial exclusiveness and inciting ethnic enmity.

Radio Svoboda reports that many witnesses for the defence noted the collaboration between Russian Image and Surkov and his colleagues Maxim Mishchenko and Nikita Ivanov.  One of Goryachev’s associates who identified herself only as Tatyana called Russian Image a “Kremlin project”.  This was a common view, Novaya Gazeta wrote back in August 2014, and noted Goryachev’s close cooperation with far-right MPs, and with leaders of pro-Kremlin youth organizations.

Tatyana told Radio Svoboda that many nationalists hadn’t liked the fact that Russian Image was “partly a Kremlin organization, even a puppet one”. The defence insisted on this difference, asserting that it made it impossible for Goryachev to work with Tikhonov and Khasis.

This is not the version presented by the latter.  Tikhonov dates the origins of BORN to 2007 when he turned to Goryachev for help to get back to Russia from Ukraine where he’d fled from prosecution for a 2005 killing.  He asserted on June 8 that Goryachev had spoken of his contacts in the President’s Administration, who were interested in political services, not the money Tikhonov suggested offering them.

According to this version, Goryachev proposed that Tikhonov head a militant wing of Russian Image which would be overseen by the Kremlin.  He claims that he agreed in order to return safely and that he was given a list of specific antifascist leaders, together with their addresses.  Although nobody used harsh words like hit-lists, he alleges that this was the start of BORN, and that Goryachev perceived it as the illegal wing of Russian Image, with the relation between the two similar to that between the legal party Sinn Fein and the IRA [Irish Republican Army].

Goryachev argued that the list had been needed for a lecture he was asked to give for payment by Alexei Mitryushin from the pro-Putin movements Nashi, and later Mestniye on the activities of left-wing activists in Russia.  He does not seem to have clarified why their addresses were required.

Goryachev’s defence team (the same as that representing Nadiya Savchenko) assert that the case is politicized, and that all are out to imprison their client at any cost.  They believe that the sudden disappearance of a member of the jury for most of the hearing on July 8 was suspicious and that the refusal of three witnesses to appear three days before that could indicate that they were put under pressure.

In his final speech Goryachev apparently ignored the judge’s objections and warnings that he would stop him altogether, and constantly spoke of staff of the President’s Administration, the IRA and other subjects.

With respect to the allegations, back in June this year Putin’s Press Secretary was forced to mention the subject.  Not unexpectedly, he denied everything.  During the trial, the prosecution appears to have also tried to dismiss such claims, asserting that Goryachev likes to make himself seem important in this way.

Despite the number of people from pro-Kremlin groups or the Administration mentioned, only one appears to have appeared as a witness for the defence.   Leonid Simulin was identified by both Tikhonov and Khasis as the contact person in the President’s Administration, and as a person for whom Goryachev asked Tikhonov to obtain a firearms weapon.  Simulin later went on to hold a ‘ministerial post’ among the Kremlin-backed militants in the self-proclaimed ‘Donetsk people’s republic”.  Mediazona reports that throughout the questioning on June 22, he looked scared and spoke barely audibly.  He denied everything that Tikhonov and Khasis asserted.

The jury was not asked to give their opinion about the alleged role of people in the President’s Administration, only whether Goryachev was guilty or innocent of the impugned role in BORN.  Where asked, they found the allegations proven.