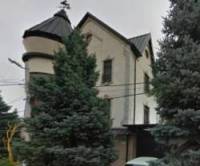 Alexander Zakharchenko, the Kremlin-backed militant leader of the so-called ‘Donetsk people’s republic’ has certainly not suffered like the people of Donbas from the military conflict unleashed in April 2014.  Quite the contrary, judging by the luxury and palatial homes that he is enjoying.

Zakharchenko’s good life may be about to end, judging by current rumours of a power struggle underway.  These come together with reports that Russian President Vladimir Putin’s adviser Vladislav Surkov is on yet another ‘business visit’ to Donetsk.  The investigation into Zakharchenko’s new lifestyle, however, was carried out by Oleksy Matsyuka, a well-known Ukrainian journalist and he cannot be suspected of involvement in militant power games.

Matsuka writes that Zakharchenko, “who calls himself ‘the head of DPR’, has moved at the same time into several private houses in the regional centre, and has spread his offices around several addresses in the centre of Donetsk”.

His subordinates, he writes, call Zakharchenko a ‘sociopath’ who doesn’t receive Donetsk residents, seldom appears at mass events and doesn’t particularly like spending time with others.

The one recent exception was on June 15 when he had no choice but to come out and speak with protesters.  Around 500 residents had gathered in the centre demanding that the militants stop firing rocket launchers from inside Donetsk and stop using civilians as shields.  Zakharchenko then came out after almost 3 hours, flanked by men with machine guns.  Details of the protest here: “Stop using us as shields!”

The demonstration was distorted or totally muffled in the pro-Kremlin and local militant-controlled media, but reported live by Pavel Kanygin from Novaya Gazeta.  He was then detained and beaten up by militants the following day and sent back to Russia.

Zakharchenko’s lifestyle is nothing new for the Donetsk oblast.  Matsyuka points out that his taste for luxury and huge homes is similar to that of former President Viktor Yanukovych who began his rise to power in Donetsk.

Zakharchenko has also apparently shunned contact with fellow militants.  He travels around the city only with an armed guard and seldom leaves it.  He still uses crutches, having been shot in the leg by his own guard.  That, at least, is the official story.  He often fails to appear at work, citing his health as the reason.

He has two main ‘residences’ at the moment, one of which is more modest than Yanukovych’s Mezhyhirya, but still more like a palace and in stark contrast to the place he lived in before being installed as ‘DPR’ leader.  Matsyuka suggests that his wife may still be living there.  Zakharchenko has a new partner who lives with him in his luxury homes.

Zakharchenko has held his post since early August when he replaced Russian national Alexander Borodai.  At the time many commentators noted that the Russians like Borodai and Igor Girkin (Strelkov) were being replaced by Ukrainian nationals.  This improved appearances yet changed little, and nobody has seriously suggested that Zakharchenko, Igor Plotnytsky from the so-called ‘Luhansk people’s republic’, and others in top posts take decisions without consulting the Kremlin.

Judging by the mounting belief that Zakharchenko is about to lose his post, probably to Alexander Khodakovsky, and the rumours that Surkov is yet again in Donbas, heads do not roll without Kremlin involvement either.