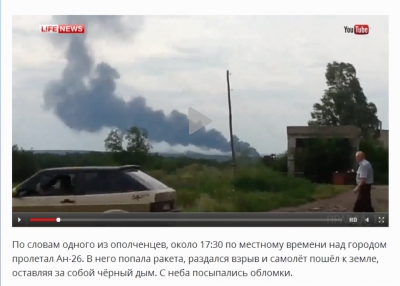 Screenshot of the video footage shown on LifeNews

Within minutes of the downing of Malaysian Airline MH17 Russian television and other media reported that the militants in Donbas had downed a Ukrainian military airplane, and even showed the video footage.  It was removed later in the evening as Moscow realized all that it had to hide.  From then on there have been only lies.  Now Russian President Vladimir Putin has claimed that the tribunal that all countries whose citizens were on that flight, and Ukraine, are calling for is ‘premature’.

Russian commentator Anton Orekh reminds Russian readers of how “each day we shouted from all the screens and tribunes about the Kyiv junta, about the fascists, Bandera-supporters and genocide of Russians in Donbas and how many times the word ‘tribunal’ was heard! Crimes against humanity, war crimes, punitive operations – have you forgotten?”

He recalls that even after MH17 was downed, there were still claims that it was a Ukrainian missile, or even that the plane had been carrying dead bodies as provocation.  “Then we also threatened a Nuremberg trial”.

Now, when an international tribunal is a reality, it is Russia that is against.  Why, if all the claims made about Kyiv being to blame, etc. are true?

A strange situation, he says, when those supposedly convinced that they are right, those who claim to have the strongest proof and know where to look for the culprits, try with all their might to prevent a tribunal.  Those who have the truth on their side would not be afraid, and this, he says, is the best proof of what is clear to everybody.  Proof that the Boeing was either downed by Russian soldiers fighting on the side of the separatists, or the separatists themselves believing the plane to be a Ukrainian military transport plane.

“And in Moscow they understand this better than anywhere. But they don’t want to admit it and prefer endless lies. Because this entire war is based totally on lies. From beginning to end.

These fake republics are a lie. And the fascists with Bandera-supporters.  And the volunteers in Donbas are a lie. And when they downed the Boeing, nothing else remained but to once again lie. To lie to the bitter [in Russian: triumphant] end.  Only there will be no triumphant end in this story. There will be shame, dishonour and hundreds and hundreds more deaths in addition to those 298 who died in the sky over Ukraine.”

There have already been thousands of deaths.

In  memory of the 298 people who lost their lives on July 17, 2014, and all those Ukrainians killed before and since, join in a minute’s silence on Friday - and in the calls for an international tribunal to stop the lies and the killing.

From a year ago

The Life News Channel report came shortly before it became clear that it was no Ukrainian military aircraft that had been shot down.  The words under the video say: “According to one of the rebels, around 17.30 local time an An-26 flew over the city. A missile hit it, there was an explosion and the plane came down, leaving black smoke.  Wreckage fell from the sky”.

The video was removed during the evening, as were many of the reports in other pro-Kremlin media as well.

The screen shot from that video is basically identical to the post on the social media website VKontakte, purportedly from the militant leader, Strelkov [Igor Girkin] boasting of having downed a Ukrainian AN-26.  The claims that the post was a fake do not explain why that ‘fake’ was broadcast on Russian television.

They make it entirely clear why the video was removed, it’s called hiding the incriminating evidence.