Convicted of ’hate speech’ for criticizing Russian annexation of Crimea 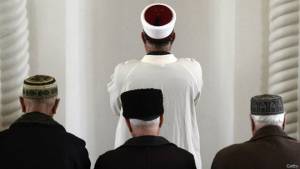 Mustafa Yagyaev, the imam of a village mosque in Crimea, has received a 2 year suspended sentence and been prohibited from “any activity involving the circulation of information” after three colleagues claimed that he had made comments about Crimea returning to Ukraine, Russians, etc.

The women reported Yagyaev to the Centre for Fighting Extremism in June 2014. According to their version, Yagyaev had said the following: “We will return Crimea to Ukraine, there will be war, we will kill and burn you, and Russians will choke in blood in this war, but it’s a shame that my Muslim brothers will die”.

Yagyaev denies this and says that the argument with the women was on an everyday issue and that they made their denunciation out of animosity towards them.  It is not clear when he was summoned to the investigator, but six months after the argument, on Dec 18, armed enforcement officers carried out a 5-hour search of his home, and of the mosque.  They removed religious books, a hard disk, photos, telephones, as well as documents pertaining to a meeting while he was head of the local Mejlis [body of the Crimean Tatar assembly] of the Turgenevka village [Bakhchysarai region].

On the basis of the denunciation, he was charged with inciting enmity with the use of force or threatening to use it (Article 282 §  2.a of the Russian Criminal Code).

Russia’s Sova Centre which monitors hate speech suggests that the real reason for Yagyaev’s prosecution was quite probably his work as imam and his civic activity in the 1990s as member of the Crimean Tatar Mejlis.

The Centre criticizes the sentence under Article 282.  Even if, and there must be doubts, he really did make remarks that could be viewed as a threat to use violence, the statements were not made publicly but to three woman sitting in a room. Article 282 applies only to public utterances.

There had been many armed searches prior to that of Yagyaev’s home and mosque.  It was always Crimean Tatars who were targeted, and a clear offensive against the Crimean Tatar Mejlis had been underway since September .

Whether aimed at the Mejlis, or one of an ever-increasing number of repressive measures against all those opposing Russia’s annexation of Crimea, including a teacher now in custody, remains unclear.  The charges, however, are obviously unwarranted, and the sentence, including the attempt to silence the imam altogether, deeply disturbing.