“Crimea was always ours!” 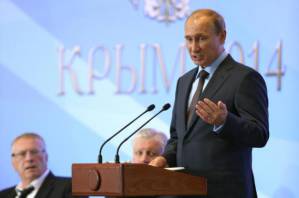 Forget hurtful words like ‘annexation’ and ‘invasion’.  A new Russian legislative initiative has been proposed which would ‘remind’ people that Russia had been entitled to Crimea from the time of Catherine the Great.

The initiative has been proposed by Sergei Tsekov, member of Russia’s Federation Council (upper house of parliament) from Crimea.  If accepted, it will establish April 19 as a memorable date marking the day in 1783 that “Crimea, Taman and Kuban were accepted into the Russian Empire”.  According to the Crimean parliament’s website, the bill has received a positive assessment in various Federation Council committees as well as from Sergei Lavrov, Russia’s Foreign Minister.  Lavrov reportedly believes that “establishing this memorable date will make it possible to attract attention to an important historical and legal event – formalization of the merging of the above-mentioned territory within the Russian Empire.  The legitimacy of this event was not disputed by anybody, it was recognized by other states and at the present time will remind people of the right by Russia to own the above-mentioned territory from the end of the XVIII century”.

The legislative initiative has been tabled in Russia’s State Duma.

This is the latest of a series of attempts to provide historical justification for Russia’s annexation of a part of Ukraine in March 2014.  In June Russia’s Prosecutor General asserted that the 1954 decision of the relevant Supreme Soviets which formally made Crimea part of the Ukrainian SSR did not comply with the Soviet onstitution and was therefore illegitimate.  This came six months after Valentina Matveyenko, speaker of the Federation Council announced that they were preparing a draft bill which would declare the Soviet normative acts on transferring the Crimea from the Russian to the Ukrainian SSR to be of no legal significance.   It was a year after the State Duma speaker Sergei Naryshkin claimed that it was Ukraine that had annexed Crimea, not Russia.   More details here:  "Not yours anyway!" Russia claims transfer of Crimea to Ukraine was ‘unconstitutional’

Although the international reaction led to official statements distancing themselves from any attempts to dispute the independence of the Baltic States ‘on historic grounds’, the proposal was aired (see: Russia to declare Baltic Republics’ independence unlawful?)

In June 2015 three men were convicted of ‘hooliganism’ in Kaliningrad.  They were released in court, but only because they had already been in detention since March 2014 for placing a German flag on the top of an FSB garage in Kaliningrad.

Russia was not amused, and the initial charges looked likely to end with up to 7 years imprisonment under Article 213 § 2 of the Criminal Code (group conspiracy to commit hooliganism motivated by political hatred and enmity or hatred to a particular social group).

The men had been trying to point out the double standards whereby Russia officially approves of Russian flags being flown in part of Ukraine’s sovereign territory, but treats the raising of a foreign flag over Russian territory as a crime.

The same reaction would be likely if Kaliningrad residents were to ask for recognition of dates marking their history as German Königsberg until 1946.

Heavy censorship, state control of the media and prosecution of dissidents can only achieve so much when attempts to justify flagrant violation of international law are so very pitiful.