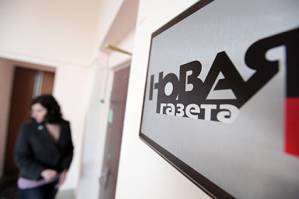 Russia’s Roskomnadzor has issued the independent newspaper Novaya Gazeta with a warning over bad language cited in a literary text.  As the second warning in less than a year, it could be used as pretext to strip the publication of its licence.

If the first warning was over alleged ‘extremism’ in a political text by the well-known journalist Yulya Latynina, the second is over an excerpt from a book soon to be published by the newspaper’s own Far East correspondent Vasily Avchenko.  The book was shortlisted for the National Bestseller in 2015, and the specific text  ‘Yaponomortsi’ about how the harsh weather conditions, landscape, people, even food influence a person’s character.

Novaya Gazeta has not yet received formal notification, though information about the warning is already available on the Roskomnadzor site.  The press secretary Vadim Ampelonsky has apparently stated which is the offending word, by giving a synonym.

Suspicion that this word is being used as a pretext is only heightened by the fact that the word in question was published with dots replacing some letters.  Given that it was likely to have been used by a character in a literary text, the fact that the people at Romkomnadzor knew which word was meant should not be enough to warrant a formal warning.

Novaya Gazeta, the newspaper which Anna Politkovskaya wrote for, is one of the few independent media still publishing in Russia.  Over recent months it has published vital material regarding Russia’s undeclared war against Ukraine.  There was an interview with Dorzhi Batomunkuyev, a 20-year-old soldier from Russia who suffered horrific injuries while fighting in eastern Ukraine.  More recently Pavel Kanygin took interviews of the two Russian spetsnaz soldiers who were captured in Ukraine, and whom Russia has effectively abandoned and is claiming were not serving officers. Kanygin also provided important reports from the area controlled by Kremlin-backed militants until he was beaten up and ‘deported’ by the militants a day after providing live coverage of a demonstration in Donetsk.  The residents were protesting against being used as live shields by the militants.

It seems likely that the warning is aimed more at putting pressure on the publication, than as a direct attempt to close it down.  The censor is now formally entitled to do so, but has apparently “stressed that this infringement is “not systemic”, and has noted that there was a considerable period between the first and second warning, and that they were of a different nature”.

The first warning also demanded the removal of passages which Novaya and the vast majority of its readers found nothing ‘extremist’ in.  It could at least be predicted in that case that Latynina’s text, entitled “If we’re not the West, then who are we?”, would irritate the Russian authorities.  This latest supposed transgression seems totally arbitrary and unpredictable – a warning in itself that the publication should watch its step.