Ukrainians not willing to give up Donbas for peace 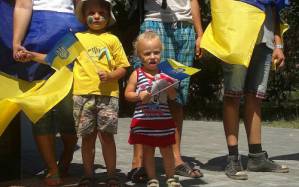 According to a recent survey, only 15.3% of Ukrainians would be willing to hand Donbas over to Russia in exchange for peace. The figure willing to give up Crimea was higher – 33%, but still much lower than the 50.6% against.

The Kyiv International Institute of Sociology [KIIS] survey examined the socio-political situation in the country in July 2015, devoting most attention to people’s assessment of Ukraine’s leaders and political party preferences a few months before local elections are due.  It also sought Ukrainians’ views as to potential ways of resolving the conflict in eastern Ukraine.   The survey was carried out throughout the country except in Crimea and in those areas of Donbas under Kremlin-backed militant control.

In the country as a whole 56.8% of the respondents supported continuation of the peace process and peaceful regulation on the basis of the Minsk Accords. The geographical divide here is telling.  There were less supporters of this peaceful process in the West and Centre [49.0% and 49.9%, respectively] and not so dramatically many in the East .  In the South support reached 79.5% and in Donbas itself – 74.8%.

28.3% were in favour of the Ukrainian army liberating the occupied area of Donbas by force. This overall figure is, however, based on an average between greater support in the West and Centre, and less elsewhere.  Only 4.1% of people in Donbas were in favour.

Respondents were asked to give a response to the statement that “any agreement with the Russian Federation’s current leadership is deception and will still not be carried out.  There was agreement with this from an absolute majority in the country  as a whole (35.1% totally agreed, and 21.2% probably agreed).   The figure for Donbas was, however, fairly markedly different, with only 22.8% agreeing, and 16.3% disagreeing (with another 6.5% probably disagreeing).

Ukrainians were asked whether they were prepared to make other changes or renounce other things for the sake of peace.  Only 5.8% said that they would be willing to hand Russia all of Eastern and Southern Ukraine as divided by the Dnipro River.  33.9% would be prepared to renounce integration with the EU, against 48.8% who would not (the analogous figures for giving up membership of NATO: 40.7 would agree, vs. 41.0% would not).

24.7% would accept an amnesty for separatists (the term used); 55.4% would not find that acceptable.

47.7% said that for the sake of peace they would be prepared to accept Russian as a second State language, against 38.0% who considered this unacceptable.

KIIS points out that the survey was carried out before the events on July 14 in Mukacheve and before the new amendments to the Constitution were presented and sent to the Constitutional Court for assessment.  Both these things might well have had impact on people’s response, KIIS stresses.

Such results must, obviously, be compared to those of surveys ascertaining the attitude in the country to the above issues.  Surveys have always found that there is majority support for retaining Ukrainian as the only State language.

Two surveys reported here, which were also carried out by KIIS in cooperation with the Democratic Initiatives Foundation found very little support for independence of the ‘republics’ or for joining Russia.  In the survey of people in two Luhansk oblast cities, and earlier in the Donetsk oblast cities of Sloviansk and Kramatorsk, both liberated from the militants in July 2014, a majority wanted the Ukrainian military to remain in their cities.  A majority considered Russia to be a party to the military conflict.