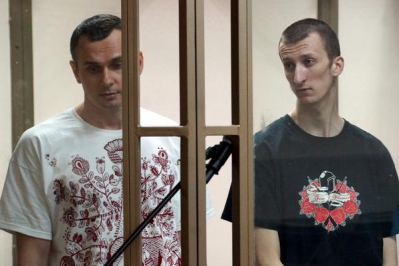 All possible illusions about the trial of well-known Ukrainian film director Oleg Sentsov and left-wing activist Oleksandr Kolchenko were dispelled by around midday on July 21, three hours into the first hearing.  Sentsov really is facing a likely 20-year, or even life sentence on charges of ‘masterminding’ a ‘Right Sector’ plot in which fire bombs were thrown at two buildings housing pro-Russian organizations and a plan was afoot to blow up a Lenin monument.  The charges are based solely on the testimony of two men who received minimum sentences for ‘cooperating’ with the prosecution.  Left-wing activist Oleksandr Kolchenko is charged with participation in the same far-right organization’s ‘terrorist plot’ and with throwing one Molotov cocktail, for which he is likely to receive a 20 year sentence.

The decision to remove the trial from western journalists and diplomats by holding it in a military court in Rostov on the Don was doubtless deliberate.  Most reports in the western media on Tuesday  mentioned that both men deny the charges of terrorism, that the EU and USA have called for the men’s release.  Some quoted Sentsov as saying that he did not consider this a court, and that he believes the charges to be revenge for his opposition to Russian rule, but gave no further detail, although it is precisely the details that are so very damning in this case.

Four Ukrainian opponents of Russia’s annexation of Crimea were arrested in Crimea in May last year and held incommunicado for two weeks or more.  They were taken to Moscow where on May 30 Russia’s FSB announced that the men were facing ‘terrorist plot’ charges and pro-Kremlin television channels shown two of the four – Gennady Afanasyev and Oleksy Chirniy – ‘confessing’.  Both Kolchenko and Sentsov have consistently spoken of being tortured and told that if they didn’t confess, they would face more serious charges.  Despite physical marks corroborating Sentsov’s testimony, the prosecutor refused to investigate.  It seems extremely likely that the other two men gave ‘confessions’ under the same duress (more details here).

As reported earlier, Russia is claiming that Sentsov and Kolchenko are Russian citizens, essentially ‘by default’ because they did not formally express their intention to retain Ukrainian citizenship after Russia’s annexation of Crimea.  They have been prevented from seeing the Ukrainian consul and are being denied their rights under both Ukrainian and international law.  Both men are adamant that they are Ukrainian citizens, and Kolchenko’s lawyer has lodged an appeal with the European Court of Human Rights.

14 months ago the FSB made grandiose claims about plans to carry out ‘diversionary-terrorist’ acts in Simferopol; Yalta and Sevastopol with a number of buildings, railway bridges and power lines supposed to be destroyed in Sevastopol.  It then forced the  men’s lawyers to sign undertakings not to divulge information about the case, including revealing the lack of any real charges. As mentioned, it seems that the testimony of three individuals, and even their identity, have been classified and will be considered in closed session.

Such secrecy can be justified where real terrorist acts need to be prevented and informers protected.  This is not the case here as Mediazona’s report from the courtroom makes clear.  All charges revolve solely around the Molotov cocktail incidents, a plan to blow up a Lenin monument, and maybe, though even the prosecutor seemed unsure, a “possible explosion” at the Eternal Flame.

The Prosecutor Oleg Tkachenko announced in court that Sentsov is charged with having received instructions from Right Sector in March to create a Right Sector unit in Crimea “and carry out terrorist acts in order to destabilize the situation and act on the authorities so that they take the decision to leave the Russian Federation”.  It is worth remembering that Russian soldiers had seized control on Feb 27, 2014, and Russia completed its annexation on March 18.  It is not only Dmitry Dinze, Sentsov’s lawyer, who does not understand how exactly the impugned actions, even if they did take place, were supposed to lead to Crimea “leaving the RF”.

Sentsov is alleged to have met with Afanasyev; Chirniy and three other people: Enver Asanov; Nikita Borkin and Ilya Zuykov. According to civic activist Oleksandra Dvoretska, who was living in Simferopol until annexation, Enver Asanov was already in Kyiv at the time in question.  Nothing at all is known about the other two men who, if they do in fact exist, are on the wanted list, together with Asanov.

Sentsov supposedly announced, at some unspecified moment, but "no later than April 11", that protests had no effect, and that “it was necessary in accordance with the purposes of Right Sector to create a group for acts aimed at influencing the authorities, ” and “to turn to destabilizing the work of the authorities of the Russian Federation, including to carry out an explosion at the monument to Lenin.

Chirniy offered to carry out the explosion, and on that same day, the prosecutor claims, Sentsov handed him 200 UAH via Afanasyev.

He also asserts that Borkin and Kolchenko were recruited “not later than April 18”.

Sentsov’s impugned actions are all given as “not later than” the dates on which the Molotov cocktails were hurled at the buildings late at night.  His role, in the prosecution’s version, was solely to tell people what to do.  This is described as having been “via” the two men who have given testimony against Sentsov and received minimum 7-year sentences against the 20 years facing Sentsov and Kolchenko.

There is nothing to link Sentsov with the right-wing organization Right Sector, while the suggestion that anti-fascist Kolchenko could have agreed to join a ‘Right Sector’ plot is simply absurd.

Kolchenko does not deny that he threw a Molotov cocktail at a building housing pro-Russian organizations.  The building was believed to house pro-Russian organizations and provide a transit point for Russians believed to be directly implicated in the violent seizure of control in Simferopol.  The court rejected a couple of Dinze’s questions regarding the activists of the “Russian Society’ and also its links with state structures. The lawyer explained his question about the links, pointing out that the prosecution claims that Sentsov had tried “to destabilize state bodies of power”, yet the two organizations whose buildings were attacked were both private organizations.  No answer was forthcoming.

Both Kolchenko and his lawyer, Svetlana Sidorkina, are adamant that the sole real charge against Kolchenko can be classified as hooliganism or vandalism, but does not constitute ‘terrorism’.

Nor does toppling, dismantling or any other disrespectful treatment of a statue to Lenin, as a court in Russia has confirmed. On July 21, a Russian citizen was sentenced to 1 year restriction of liberty for cutting off the head of a Lenin monument in the Tomsk oblast.  His act was qualified as vandalism.

The human rights organization Memorial has declared Sentsov and Kolchenko political prisoners and there have been calls for their release from all European structures and democratic governments.  These are all grounds for agreeing with Sentsov’s lawyer that no fair trial can be expected, or could even be possible in a case based solely on testimony beaten out of two men.  It seems likely that the FSB expected all four men to break under pressure and didn’t see the need to produce a convincing case.  Tragically, the failure by even one judge in the last 14 months to question any of the multiple irregularities in their detention suggests that Russia’s courts also have no problem with trying men for non-existent ’terrorism’.

The next hearing is scheduled for July 27.