‘Perm-36’ fined for not registering as ‘foreign agent’ 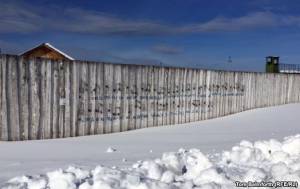 ‘Perm-36’, the NGO recently forced to give up running a vital museum about the Soviet Gulag has not only been forcibly registered as a ‘foreign agent’, but also fined steeply for not registering itself.   The organization has been ordered to pay 300 thousand roubles, and the former director Tatyana Kursina – 100 thousand.

Russia’s justice ministry announced in April that ‘Perm-36’ had been added to the Register of ‘Foreign Agents’.  The Ministry’s Perm department had claimed to have found ‘political activity’ in the NGO’s activities and also foreign funding.  The department then announced plans to bring administrative proceedings against the management of the NGO and have it fined for not having independently asked to be added to the list, and not having provided accounting documents.  As reported, the moves were especially cynical since the NGO had been denied access to the museum’s archives for around a year.

The Perm-36 Museum opened in 1996 on the site of the harsh regime labour camp in Kuchino, Perm oblast.  It was here that Vasyl Stus died on September 4, 1985 and where Valeriy Marchenko was held before his death in a Leningrad hospital.  Other Ukrainian political prisoners included Yevhen Sverstyuk and Levko Lukyanenko; Russian:  Sergei Kovalev, Gleb Yakunin, Yury Orlov and Vladimir Bukovsky.

The offensive against the Museum began over a year ago, in 2014, when state funding was cut, the director dismissed and even water and electricity supplies cut.

Although purportedly a regional issue, it is of significance that in June 2014 the nationwide pro-Kremlin television channel NTV broadcast two programmes accusing the Museum and its staff of “re-writing history and glorifying Bandera supporters and fascists”.  The NTV programme, entitled “Fifth Column” , “endlessly repeats the neo-Stalinist idea that only Stepan Bandera supporters and those who collaborated with the Nazis were held in Perm-36, with the conclusion that the museum itself is built on pro-fascist and anti-State ideology”.

An appeal launched under the title “Save the Public GULAG History Museum from destruction!” was signed by well over seventy eight thousand people.

It did not, unfortunately, stop the attack against the NGO and the transformation of the Museum into a travesty where “the words "Stalin, " "dissident, " or "gulag" are nowhere to be seen”.

It is not only information about the victims that Russia, under former KGB officer Vladimir Putin, is trying to hide.  An instruction from March 12, 2014 classified the archives of all the secret police [officially ’state security’] bodies (Cheka, NKVD, KGB, etc.) for another 30 years  (see: Russia’s ’new approach’ to Stalin and extended secrecy about his victims).