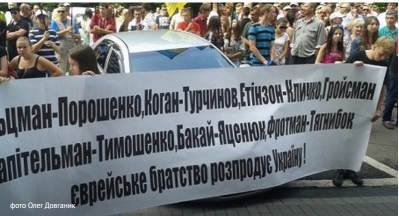 A fake anti-Semitic demonstration in Lviv on Wednesday was ugly and dangerous, not least because it highlighted the ease with which such stunts can be orchestrated and the inability of the authorities in a democratic country to intervene.  The local media fortunately reacted with some inconvenient questions and close attention to money changing hands.

On July 22, around 100 people appeared outside the Lviv Regional Administration building and unfurled banners with anti-Semitic messages against the present government.  One big banner gives the supposedly ‘real’ names of Ukraine’s leaders, claiming that this “Jewish fraternity is selling off Ukraine”, another: “No Jews in power”.

The Lviv-based publication Zaxid.net and the Television News 24 channel were at the scene and tried to ascertain who the people were and what they were demanding.  The first thing that hit them in the eye was how reluctant the ‘demonstrators’ were to show their faces.  There were a large number of teenagers, as well as many adults, as they put it, “of suspicious appearance”.  All participants had difficulty explaining what their demands were and what Jews had to do with anything.  The journalist directly asked one young lad if he had been paid.  The young boy turned away still further, like most of the other kids, trying to hide his face.  The video can be seen here:  http://zaxid.net/news/showNews.do?na_proplachenomu_mitingu_pid_loda_rozgornuli_antisemitski_gasla&objectId=1359346 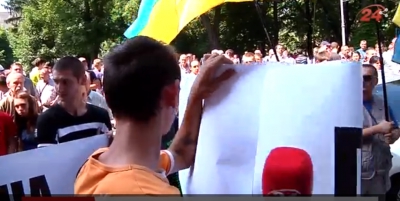 It should be stressed that the journalists and others (from around 1.30 on the video) were watching the spectacle with anger. Crime journalist Mykola Savelyev told the news programme that he had seen people he knows to have a background in crime and believes that they were there to earn a bit of money. Like paid demonstrations under the former President Viktor Yanukovych, some of the older ’picketers’ had obviously had too much to drink.

Savelyev pointed out the very professional look of the anti-Semitic banners and reminded the viewers of the amateur placards produced during Euromaidan.  The demonstrators not only didn’t quite understand what the banners were all about, but saw no need to keep them.  The reporters found them thrown in the rubbish bin after the participants dispersed.  .

Police were present but explained that they had no reason to intervene.  The authorities had been notified of the planned picket, though clearly not the nature of the banners and chants, and the event passed peacefully.  It was for the SBU [Ukraine’s Security Service] to assess whether the banners had incited racial enmity and therefore fell under Article 161 of the Criminal Code.  That is, long after the event has taken place and attracted negative publicity. 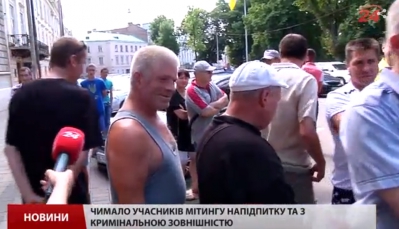 The event’s organizer was a civic organization called ‘Active Element’, registered in the Lviv oblast in January 2014 and headed by a certain Oleh Onats.  There was no way of anticipating the anti-Semitic flavour of the performance since this was the first time the NGO had made its existence known in the last 18 months.  Zaxid.net managed to track down Onats who said he was ‘co-organizer’ of the event, but refused to name the other organizers and ‘partners’. He also denied that money had been paid for participation even though the news channel had filmed such transactions.

Zaxid.net was unable to establish who is financing ‘Active Element’s ‘activities’, but it points out that the cost of paying participants and getting the banners specially printed made it an expensive stunt.  Savelyev suggested that a local MP from the Opposition Bloc (the former ruling Party of the Regions) might be behind it, but as of yet, nothing has been confirmed.

This latest staged demonstration comes only days after a planned ‘separatist’ picket in the same location turned into a 5-minute photo stunt, with the event inflated beyond recognition within hours by Russian television. It also coincides with the aftermath of the conflict in Mukacheve and in particular the opposition expressed by the far-right Right Sector to the present government.

It may be difficult to pinpoint exactly who orchestrated Wednesday’s event, but the intended message seems clear.  Headlines suggesting an anti-Semitic element in ‘nationalist’ anti-government protest seem likely, or they could simply try to associate Lviv with anti-Semitic sentiments.  One need only imagine the impact of the anti-Semitic banners on observers in other countries, unable to see the specific types of ‘participants’; their inability to explain their presence and the evidence that they were paid to be there. The media, one assumes, will point out that the police did not try to stop the protest as though this suggests police collusion. There are self-evident propaganda uses for Moscow which has faced failure after failure in convincing the world that Ukraine is, in Russian President Vladimir Putin’s words “a hotbed of fascism and anti-Semitism”.

There may well not be any democratic way of stopping such overt provocation.  It is frustrating, nonetheless, that even 100 people, including many young adults, were prepared to take money for participation in a stunt, both offensive in itself, and of obvious harm to their city and country,