Another attack on journalists investigating Interior Ministry corruptionHead of Traffic Police Dismissed after Scandalous Lifestyle ExposedIt’s Tax Time In Ukraine, And Financial Discrepancies Suggest Corruption EnduresBehind the declarations: how public officials lived – and live nowParliamentarians’ secrecy regarding income given judicial OKVerkhovna Rada and Constitutional Court least willing to divulge public informationCourt rejects Verkhovna Rada claim that staffing details are not for the publicOPORA takes secretive Verkhovna Rada Office to courtCHESNO: Office of the Verkhovna Rada flagrantly violating Public Information ActUkrainska Pravda takes parliament to court over concealed informationResidences of Azarov, Lytvyn and Yushchenko to cost the taxpayer 50 million UAHCourt has no problem with parliament not handing over MP’s declarationsVerkhovna Rada Office refuses to hand over Deputies’ declarationsPublic Information Law like a Bolt from the Blue for the AuthoritiesCVU: Ukrainian authorities not ready to be openFirst legal proceedings over alleged infringement of Public Information LawStop Censorship will force Deputies to make their income declarations publicThe Public are most interested in how public funding is spentLaw on Access to Public Information: comes into effectMayor of Uzhhorod bans action in support of Public Information Law
• Topics / The right to life 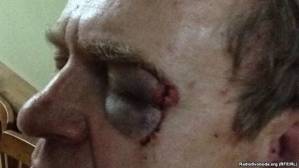 Oleksandr Kulibabchuk is in hospital with head injuries after being beaten unconscious by assailants.  His wife Natalya Rostova told Radio Svoboda that the men were lying in wait outside their home in Irpin (Kyiv oblast).  She is convinced that the attack is linked with her role in helping journalists from the ‘Schemy. Corruption in Detail’ programme investigate alleged corrupt dealings by the Mayor of Irpin, Volodymyr Karplyuk.  She says that it came just a few hours after the latest Schemy broadcast reported that Karplyuk’s property might face scrutiny by the tax department.

The attack happened in the early hours of July 24 near the residential complex Rich-Town which had earlier attracted the attention of the investigative journalists. The police say that the assailants did not take either Kulibabchuk’s wallet or his phone.  At the moment they plan a criminal investigation under Article 125 of the Criminal Code – causing light bodily injuries, though they say that they are awaiting the medical report.   It is not immediately clear why the police should consider Kulibabchuk’s head injuries which are causing dizziness and problems with memory ‘light’.  The penalty if people were convicted under that article would range from 150-240 hours of community work to imprisonment for 6 months, or restricted liberty for up to 2 years.

Radio Svoboda, which runs the programme in cooperation with UTV-1, has tried to contact the Mayor of Irpin for comment, but says that he does not answer their calls.

In the first half of June Schemy journalists reported that Karplyuk had sold 44 flats and alleged that he had used a fiddle, enabling him to save hundreds of thousands of UAH in unpaid tax.

The journalists scrutinized Karplyuk’s 2014 declaration in which he stated that he had sold the flats. Some of them were in residential complexes built by a company founded by his wife and the wife of the mayor of neighbouring Buch.  The journalists tracked down some of the sale contracts, including for property in the Rich Town complex.  The amount claimed per square metre was three times lower than the market value of the property.  Several of the residents told the programme that they had paid the difference in cash.

Radio Svoboda reports that Karplyuk claimed that all had been legal.  He told the programme that he had paid millions in taxes and that they should come with handcuffs, or tell him he was a good guy – one or the other.

Yehor Sobolyev, who is head of the parliamentary committee on fighting corruption, turned to the State Fiscal Service on July 9, asking that they investigate the claims.

Whether this comes to anything remains to be seen.  It is also unfortunately not guaranteed that there will be an adequate investigation into the attack on Oleksandr Kulibabchuk.  The civic watchdog Nashi Hroshi [Our Money] reported on July 20 that the prosecutor’s office has not investigated the attack on television journalists from the TV ZIK programme Nashi Hroshi near the home of the former Deputy Interior Minister Serhiy Chebotar.  In May this year Chebotar was forced to resign after the attack on the journalists by security guards at the local.  The journalists had been trying to photograph a large house which, despite Chebotar’s denials, did prove to be owned by the Deputy Minister’s wife.