The High Price of French Collaboration 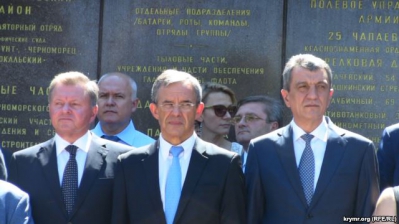 In Soviet times it was Holodomor, the Terror and Gulag that many western visitors to the USSR chose not to see, this time French politicians particularly betrayed Crimean Tatars and all others suffering persecution in Russian-occupied Crimea

It’s the same as if during World War II some international mission had visited a Nazi concentration camp and asked the prisoners if they were content with the conditions.  This was how Crimean Tatar leader Refat Chubarov described the visit by 10 French politicians to Russian-occupied Crimea.

Expressions of “shock” and “regret” from the French Foreign Ministry seem scarcely enough to compensate for the betrayal to Crimean Tatars and others in Crimea who have suffered directly under Russian occupation. There is also damage to France’s reputation when French politicians behave like obedient dogs on a lead, doing tricks on demand.  The propaganda benefit  to Russia was enormous, and well-worth any price which many observers have suggested was paid for the French politicians’ services.

France’s official position can be understood.  The men are free to travel where they choose.  The head of the delegation - Thierry Mariani – used this freedom to visit Saddam Hussein in 2002, while another member of the delegation from Nicolas Sarkozy’s party Jacques Myard visited Bashar Al-Assad and members of the Syrian leadership at the beginning of the year.  It seems likely that they assured those leaders as well that they would bring their message to the French nation, as they did in Crimea.

The French politicians have the right to travel freely, however they did enter Crimea illegally since they had not gained Ukraine’s permission.  They also showed support for and effectively repeated verbatim Russian President Vladimir Putin’s line on annexation, despite this being in flagrant breach of international law.

While some of the politicians, including Mariani, are well-known for their unfailingly pro-Kremlin line, the story told to Kommersant was that others were visiting Crimea in order to find out what the situation was and how ordinary Crimeans live.

Who they didn’t see

There were people whom the French deputies could not have heard, even if they’d wanted to.  They include:

those murdered, like Crimean Tatar Reshat Ametov or the civic activists and also a number of young Crimean Tatar men who were abducted and / or have disappeared without trace;

those banished from their homeland, like Crimean Tatar leaders Mustafa Dzhemiliev ; Refat Chubarov, and rights activist Sinaver Kadyrov; as well as the roughly 20 thousand Crimeans who left Crimea, many having experienced physical violence and harassment;

All reports in the Russian pro-Kremlin media – and there were many – were effusive.  The trip was hailed as a “breakthrough” heralding a change in western attitude and lifting of sanctions.  Most importantly, western politicians were seen to be presenting Moscow’s version of events and history with respect to Crimea.

Thierry Mariani: “Crimea is Russian. From the point of view of history, culture, demography. Even despite the fact that for 20 years the peninsula was part of Ukraine. Crimea always remained Russian. And I think that if Crimea had not returned to Russia, then today it would be the same as in Donbas.”

“What we want to say is that the majority of people we have met, various contacts, seemed happy to be back in Russia, ” . Russia Today reported him to have said.

During a press conference in Yalta, Mariani stated that “during our visit to the parliament, we asked how things are with representatives of the Crimean Tatars. The Deputy Speaker Mr Ilyasov was present at that meeting. He confirmed that the interests of the Tatars are observed, that the culture of national minorities is integrated into the life of the country. And since there are three official languages, diversity of languages is legislatively affirmed. That is a specific example of information which was not provided in Europe”  (details about the language situation here).

Claude Goasquen:  “”It’s time to accept that Crimea is a region at peace even if USA would like war to break out there”.

Goasquen also told the TASS news agency that former French President Nicolas Sarkozy “fully approved of the trip by members of his party” and that it was “quite realistic” that Sarkozy would himself visit.

Jérôme Lambert whom TASS presents as deputy chair of the French parliamentary commission on foreign affairs used his time in Crimea to publicly express opposition to sanctions against Russia and Crimea.

There were a few independent Russian media that saw little cause to wax lyrical. Yury Safronov, writing for Novaya Gazeta, pointed to some of the curious links, statements and friends cultivated by the members of this delegation.  Mariani appears to be a close associate, and have common business interests with Konstantin Malofeev, whom the Financial Times describes as “a key figure linking the pro-Russia forces on the ground in Ukraine and the political establishment in Moscow”.

Nicolas Dhuicq’s views must in all ways be music to the Kremlin leader’s ears. In 2012, Safronov reports, he stated in parliament that terrorism and single-sex families are linked.  In 2015 he demonstrated his prowess as a psychiatrist by asserting that Ukraine is deeply “traumatized and divided”, and one should not therefore support its “façade of unity”.

Jacques Myard is equally homophobic, and also supports the reinstatement of the death penalty.  He called on Europe to recognize Crimea as Russian, but to warn Russia that it shouldn’t behave like that with the other parts of Ukraine.

Refat Chubarov is convinced that the French politicians are doing what is required of them in payment for loans received from banks under Putin’s control.  He noted a telling analogy.  “after the first annexation of Crimea, when Catherine the Great was on a trip to the newly obtained territory, Potemkin organized fake villages.  Now, after almost two and a half centuries, the Russian occupiers are demonstrating the same  Potemkin pretence”.

He could have also added the large number of westerners from Soviet times, like Romain Rolland and George Bernard Shaw, who were more than willing to shut their eyes to evidence of Holodomor [the manmade Famine] in Ukraine, Stalin’s Terror and multiple other crimes.  Each of these “useful idiots” had their motives, as do the French politicians.   The uses Moscow makes of them remain unchanged.