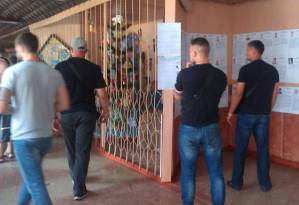 Election watchdogs OPORA and the Committee of Voters of Ukraine [CVU] have reported fake journalists, titushki, or paid thugs at polling stations, and other irregularities in the mid-term election at the Chernihiv No. 205 single mandate electoral district on Sunday, July 26.  Most worryingly, three exit polls, one commissioned by CVU, have produced diametrically opposite results.

The CVU-commissioned exit poll carried out by Sotsis found that 31.4% of the voters had voted for the parliamentary candidate from the Petro Poroshenko Bloc Serhiy Berezenko, while Hennady Korban from the newly formed party the ‘Ukrainian Association of Patriots Ukrop received 17.1% of the votes.  Korban was formerly Deputy Head of the Dnipropetrovsk Regional Administration and is seen as a close associate of oligarch and former Head of the same administration, Ihor Kolomoisky. The New Image Marketing Group gives Korban 33% and Berezenko 23%, but says that they can’t guarantee the accuracy because of the large number of people who refused to answer. The Chernihiv NGO Dobrochyn Centre found 22.8% support for Korban and 14.6% for Berezenko.  There are conflicting reports in the media also as to the causes for such divergence.

The elections were called after MP Valery Kulich, from the Petro Poroshenko Bloc, was appointed Head of the Chernihiv Regional Administration.  A huge number of candidates were running – with 91 registered – though all three exit polls name Berezenko and Korban as in the lead.

During the day OPORA, CVU and the Democratic Alliance all reported infringements, with the following the most serious:

Fake journalists:  CVU issued a statement demanding that the police investigate the presence at different polling stations of “pseudo-journalists of athletic appearance with ID claiming to be journalists from the CVU newspaper Tochka Zoru” [Point of View].   CVU called the appearance of such pseudo-journalists an attempt by certain individuals to carry out criminal offences while pretending to represent an authoritative civic organization.

The presence of ‘titushki’ at polling stations – it is not yet clear whether the reports refer only to those such athletic young men claiming to be CVU journalists or others;

Voters photographing their ballot papers – clearly indicating that they have agreed to vote for a particular candidate for financial reward.

Dzerkalo Tyzhnya notes that there were scandals as well during the election campaign.  On July 21, for example, Radical Party candidates Ihor Mosiychuk and Andriy Lozovy, together with such thugs under their control beat up two candidates – Oleksy Durnyev and Oleksandr Baraboshko.   The Radical Party candidates were supporting the far-right VO Svoboda candidate who seems to have come third.  The police were reported to have intervened on Sunday evening to avoid a confrontation between supporters of the VO Svoboda and Ukrop candidates.

There have also been claims and counter-claims of candidates giving out free food or even money during the election campaign, with Poroshenko describing the campaign as a "disgrace for Ukraine" in connection with such efforts to bribe the voters.

It seems that the Central Election Commission has reported that the elections passed without significant infringements.  It remains to be seen whether OPORA and CVU consider the infringements they recorded to have influenced the outcome.