Up to 10-year sentences proposed for ‘anti-Russian propaganda’ 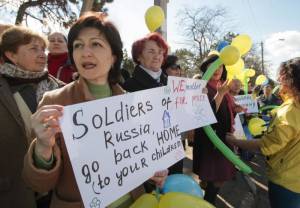 Russia’s legislators are reportedly preparing draft laws that envisage up to 10-year terms of imprisonment for ‘anti-Russian propaganda’.  There is no clear definition of the ‘crime’, but 10 years was what only ‘repeat offenders’ got in the later Soviet period for ‘anti-Soviet agitation and propaganda’.

All of this may just be talk, but with three of the parties in the State Duma seemingly preparing draft bills, it could well be more.  Nezavisimaya Gazeta correspondent Yekaterina Trifonova spoke with representatives of the Communist Party, Vladimir Zhirinovsky’s LDPR [‘Liberal Democratic Party] and the ruling United Russia Party.

The newspaper was informed that a law is already being drawn up.  It will introduce criminal liability and sentences of up to 10 years for ‘anti-Russian propaganda’, including that circulated via the media.

Vadim Solovyov, head of the Communist Party’s legal service asserts that the initiative has come from United Russia.  He says that the party began considering such a draft bill after the move to increase police powers, including the authority for wide use of weapons against the population.

The Communist Party position is somewhat specific.  Concern is expressed that the law could be directed against them for criticizing the government.  Solovyov claims that if the plans to increase police powers and prosecute for ‘anti-Russian propaganda’ go ahead, “we will in some ways be like Ukraine where citizens are actively persecuted for their negative assessment of the government”.  Solovyov was unfortunately not asked to provide examples to back this statement about Ukraine.

Solovyov stressed that his party has no problem with criminal liability for ‘anti-Russian propaganda” which “is of course needed”.  They just need to specify what this entails so that the government would not be able to use it against communists for criticizing their policies.

Punishment, he suggests, is needed for the members of Pussy Riot who have called for sanctions against Russia to be increased and for “the statements from some Russian human rights activists who openly speak of our soldiers being present in Donbas.”  He does not indicate whether 10 years would be proposed for such “manipulation of information” which he views as “the first step to Maidan”.

Zhirinovsky’s party is not about to be left behind.  State Duma deputy from LDPR, Roman Khudyakov told the newspaper that he is also drafting a similar bill.  His party’s version would include liability for all officials, ministers and MPs.  They haven’t decided on the severity of the punishment as yet, however MPs would, “at the very least”, lose their mandate.  He rejects the Communist Party’s concerns, and says that “we have a democratic country where there is always room for criticism. We’re not talking about that [criticism], but about obvious treachery and insinuations from our compatriots”.   The law, he explains, would cover opposition politicians like Dmitry Gudkov and Ilya Ponomarev.  He does not specify whether the two politicians would be tried for “obvious treachery” or for “insinuations”.  Ponomarev was the only Russian MP to vote against Russia’s annexation of Crimea and is now effectively in  exile with criminal proceedings awaiting him in Russia.  With no law on ‘anti-Russian’ “insinuations’ or ‘propaganda’ yet in force, Ponomarev stands accused of ‘embezzlement’.  It seems safe to assume that the USA will not be extraditing him.

Dmitry Viatkin from United Russia told the newspaper that he didn’t know of the draft bill but did not contradict the information, saying that it was hard to follow the activities of all his colleagues.  He added that they would only support such an initiative if the terms used were unambiguous.

It is difficult to imagine how the term ‘anti-Russian propaganda’ could be strictly defined, nor do recent legislative initiatives and action against critics of the current regime give any grounds for anticipating legal clarity.

A new article of the Criminal Code, initially proposed by the Communist Party and in force since May 9, 2014,  criminalizes what are termed ‘public calls to violate Russian territorial integrity’ with punishment of up to 5 years imprisonment.

The fear that this could be used against those opposing Russia’s annexation of Crimea has proved well-founded.  Rafis Kashapov, a Russian Tatar activist has been in detention since December 2014.  He is charged under the new article as well as with ‘hate speech’ for posts in VKontakte critical of Russia’s annexation of Crimea and aggression in eastern Ukraine (details of the texts in question here).

A Russian court recently convicted poet Alexander Byvshev of ‘inciting enmity’ for a poem expressing criticism of Russia’s invasion of Crimea and support for Ukraine. He has also been added to Russia’s List of Extremists and Terrorists for the same poem.

While Crimea remains under Russian occupation, Ukrainian nationals are also directly at risk from the above-mentioned article on ‘public calls’, as well as dangerously broad legislation on ‘extremism’.  Yury Ilchenko, a Ukrainian teacher from Sevastopol has been held in detention since the beginning of July on ‘extremism’ charges.  They appear to pertain to an article he wrote condemning Russia’s annexation of Crimea and calling for an end to Russia’s war against Ukraine.

The term ‘anti-Russian propaganda’ may be legally woolly and imprecise, but like its Soviet equivalent, there need be no illusion as to who the legislation would target.